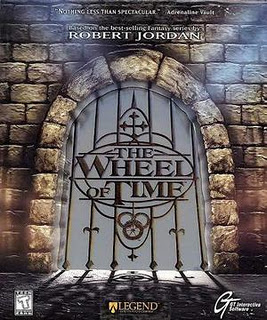 Sorry for the absence, guys, but we're back! Hopefully.

One thing I have always wondered about but never really did much research on was Wheel of Time games. So, this week, I snooped around the Internet (as per usual) and found quite a few interesting things.

There is of course the first-person shooter video game, which was released in 1999 by Legend Entertainment. In this game, you play an Aes Sedai by the name of Elayna who is also the Keeper of the Chronicles. As I mentioned before, it is a first-person shooter, but rather than having weapons like guns and swords, the character is armed with ter'angreal that have different abilities such as an offensive action or healing. The storyline is not like the books at all, but rather Elayna Sedai chases after Darkfriends and protects the seals on the prison of the Dark One.

A site that caught my eye was the Wheel of Time MUD (Multi User Dungeon). It seems to me that joining in on this MUD game could involve a lot of fun in a Wheel of Time themed virtual world. It is possible to create your very own character and choose where they are from, what sex they are, and whether they're a Hunter, Rogue, Channeler, or Noble. I've only just started finding my way in the game, but it shows promise. There are various other MUD games that you could also try, including Age of Chaos and The Great Hunt.

Red Eagle and Obsidian are said to be working on a new adaptation of a Wheel of Time game, although the only information that I could find on a release date is said to be at the end of this year, at the earliest estimate.

Other than those games, there's always the Role-playing forums that can enable you to dive into the world Robert Jordan created. Our very own Role-playing groups come highly recommended. Have a look and see if any games catch your fancy!