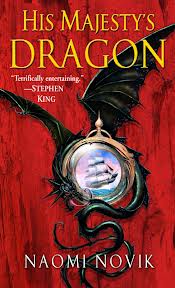 This week, I'm resuming a series of articles which will continue to be written in this feature roughly once per month, in which I will write a brief review of another book or series of books I have read. Now, I don't intend to write here a literary critique, but a little summary and taste of the fiction, with the purpose of perhaps tantalizing you into giving it a try if you're looking for something other than The Wheel of Time to read.

As you may have guessed from the title of the article this week, our subject matter is His Majesty's Dragon by Naomi Novik, which was first published in 2005. In the UK it was published under the title Temeraire.

Dragons. Napoleon Bonaparte. Naval Warfare. Gentlemanly behavior and acts of valor! His Majesty's Dragon has it all. This is the first book in the Temeraire series, which is an alternate history/fantasy series set in the Napoleonic wars, with one not-so-subtle difference: the inclusion of enormous flying beasts which fight in the air even as the Navy and the Army wage warfare on the ground! The concept is so simple and yet so brilliant that you wonder that it wasn't thought of before. What if there was an Air Force, long before airplanes were invented, an Air Force composed of mythical creatures and their riders?

I thoroughly enjoyed the first novel in the series and intend to read further. I imagine it will appeal to anyone who liked the Pern series, the Hornblower books or television series, and a lot of fantasy readers in general. It is perhaps gentler in its tone and a little more easy going than large portions of The Wheel of Time and certainly than A Song of Ice and Fire (currently made famous as A Game of Thrones, the television series), but I found it to be such a fun concept and well written regardless that I didn't regret the time I spent reading it at all.

As an added note, it has been reported that Peter Jackson, who is famous for directing the Lord of the Rings movie adaptations, is a big fan of the series and has optioned the movie rights, although he has since considered making it into a mini-series instead. Watch this space, I guess!

If you're looking for something a bit different, then I definitely recommend to give it a go. Have fun!