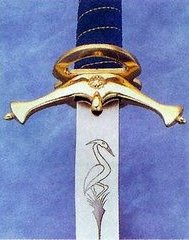 For many readers of The Wheel of Time, the Blademasters are some of the most interesting characters in the books. Sure, we may fantasize about what it would be like to wield the awesome power and the fine subtleties of saidin or saidar, but skill with the sword, a master of the blade, is something very relatable, something we can cross reference with history and other fantasy series, and even something we can experiment with in real life.

The whole notion of being a Blademaster is a fascinating one. The sword forms are, I think, one of the most interesting concepts that Robert Jordan introduced into the series, and one I can't off the top of my head think of something similar to in another work of fantasy fiction (feel free to leave a comment below if you can think of a parallel idea in another book or series). And the sword forms, it should be noted, whilst possibly learned and of some use to an experienced fighter, are actually the Blademaster's forms, designed to be learned by those seeking to reach mastery of sword fighting, duelists and purists in the use of the the katana-like curved swords of Jordan's world.

One only becomes a Blademaster if they either defeat in single combat another known Blademaster or are judged on their skill by a panel of five Blademasters, being declared as one only by unanimous vote. There are said to be fewer than 100 Blademasters within the Westlands.

A big part of the fantastical desire to earn this title for myself (and, I am confident, many other readers) is being able to carry a Heron-marked sword, one which is designed to proclaim to all your skill as a weapon, a wielder of the sword. You can imagine that to carry one would be the kind of thing to cause a room to fall silent as you enter, to cause your opponents to reassess you with a vague uncertainty, to strike fear into the hearts of your foes. "He carries a Heron-marked sword. Blademaster! Blademaster!" The whispers would almost certainly go along in your wake wherever you passed. Sublime.

So. Where can I get me one of those?

I have selected a link for you to take a look at. I have chosen one from Amazon because it is an officially licensed replica, seems to be at a saving, and of course Amazon is an international supplier. Leave a comment below if you know of a better place to find one or a wider selection online.

If you want to own your very own Heron-marked sword, then have a look online, there are plenty out there. Not only will you look and feel like a total boss, but it would be great for meets and conventions, and in general, anyone who recognized the significance of it would be another Wheel of Time fan, and that would be a great way to meet new fans.

If you do get one, or have one already, please be sure to sign up here at Dragonmount to the forums and spread pictures of you with your gorgeous blade! I would certainly like to see it over at the Warder's Guild! Have fun!