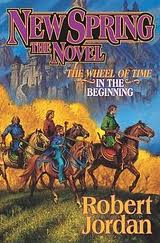 THERE WILL BE SPOILERS. YOU ARE WARNED!

I decided to start with New Spring for my reread articles because it was the first book I read in the series. I had mistaken it for book one when I bought the whole series on a whim; they were missing The Eye of the World when I went in the first time. I had to go back a day later to buy The Eye of the World. For those of you who haven't read New Spring yet, there will be some spoilers in here. I won't be talking about the whole book, but I will be bringing up points that I felt like mentioning for one reason or another.

I wanted to start with the Aiel's salute to Lan. It doesn't really go into detail about why they do this, but their reasons for calling him Aan'allein are explained elsewhere in the series. When I first read this scene, I thought it was just because of the stand those few men made against the Aiel during those moments. I was impressed by the mood of it. This scene is what really got me hooked on the series.

We see a couple of Foretellings in the series, but none as strange as the Foretelling Gitara has. She basically had a mini-convulsion before she started speaking. I am unsure if this is how her Foretellings usually hit her, but it just seemed odd. Afterwards, she falls over dead, presumably because of the stress of this particular Foretelling. I also wanted to touch on a few more things from the Moiraine point of view section. First, Moiraine has an odd fear of being queen. It does explain her fear, but it really is odd how we see later that Elayne is able to be a queen and an Aes Sedai with no problems. I do like that we get a bit of backstory on her family as well, though, during the hunt for the infant section of the days after the Foretelling. I also have one final sidenote from this section. We see a brief view of Elyas sparring with another Warder, and I like how that was slipped in casually. This wraps up the majority of the Moiraine point of view section except that she completely disobeys the Amyrlin.

Let's cut back to Lan and Bukama traveling back towards the Blight. Bukama basically starts a fight entering Canluum; he makes a promise not to draw his sword while in town. At this point, it's obvious there is going to be a fight in town. The innkeeper practically manhandles Bukama into her bedroom, though, so that was pretty funny. We hear that Edeyn Arrel has raised the Golden Crane, though I'm pretty sure Ryne just about lost his head for mentioning her. The following fight scene was pretty awesome, with Lan against six men alone and only taking a few minor wounds. Lan then decides to go to Chachin.

Moiraine is making visits to people on her list as we cut back to her, and she is also currently in Canluum. Moiraine runs into Larelle and Merean at the inn in which she is staying, and also has a surprise meeting with Cadsuane. I don't much like the meeting, so all I'll say on this is Cadsuane forces Larelle and Merean to travel with Moiraine and threatens Moiraine if she leaves without her. Siuan shows up in Canluum and informs Moiraine of the deaths of the hunters. Moiraine sends Siuan to Chachin ahead of her and plans to leave in the morning to meet up with her in Chachin.

After leaving Canluum, Moiraine follows Lan, Bukama, and Ryne. Moiraine tries sneaking up on Lan and gets thrown into a pond. After that, Bukama swears they will escort her to Chachin. Pranks ensue since Moiraine feels wronged. Upon arriving in Chachin, Lan leaves Moiraine as fast as he can and heads towards the palace while Moiraine searches for Siuan. Lan and Edeyn play her "game"; she wants Lan to marry her daughter. Moiraine enters the palace using her real name to reach Lady Ines. Merean arrives in the palace, talks to Moiraine briefly, and Moiraine goes to Lan. Upon asking Lan to have Bukama follow Merean, she also tells Lan of the failing of the Tower to save Malkier. Merean is Black Ajah and is after Brys' son. Upon finding Merean, she kills Diryk and Brys while holding Moiraine at bay. Lan fights Ryne. While Merean goes to kill Iselle, Moiraine kills her with a knife, but fails to save Iselle. Lan kills Ryne and Moiraine removes all traces of Merean from the area. The book ends with Moiraine bonding Lan.