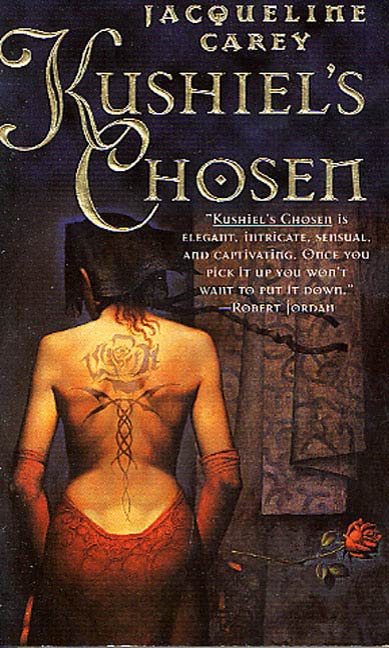 Kushiel's Chosen is the second book in Phedre's Kushiel's Legacy trilogy. The review of first book can be found here. The review will contain spoilers from both books.

The book begins almost after the incidents in the first book. Phedre is living in Montreve as a comtessa. A merchant and acquaintance had chanced upon Phedre's cloak which she last worn when she was betrayed by Melisande. Fearing Melisande's return, she decides to return to Terre'd'Ange to the service of Namaah and find out Melisande before she could destroy the kingdom. In Terre'd'Ange, Phedre tries to resolve the mystery of Melisande's escape and this causes her to distrust those who would have been her allies. What follows is a journey fromTerre'd'Ange to La Serenissima to La Dolorosa, being captive and escaping and hoping to stop Melisande in time.

This books is a lot faster than the first book and less chances of wanting to leave in the middle. This book has more adventure and can keep you up for late nights if you get caught up. The relationships are quite interesting. I especially liked Phedre and Melisande's complicated relationship where Phedre loves and hates Melisande. It gives a complexity to the villain.  The similarities between Phedre's world and the real world are fun to observe. Its easy to get involved comparing different regions of that world to this world.

I was not happy with the ending. the first book had ended on a note that made me want to read the next book but this one ended on a happier note than I would prefer in second book of a series.  Phedre's and Joscelin's way of thinking became irritating at times.

Most second books in series cannot match up to the first book, but this is better than the first book in some ways. There are parts which don't satisfy me and some parts which I would have not read at all so it is not a perfect book. But if you are in mood for something romantic with lots of adventure, give it a try.

Kushiel's Chosen can be found here, at Dragonmount's eBook Store.