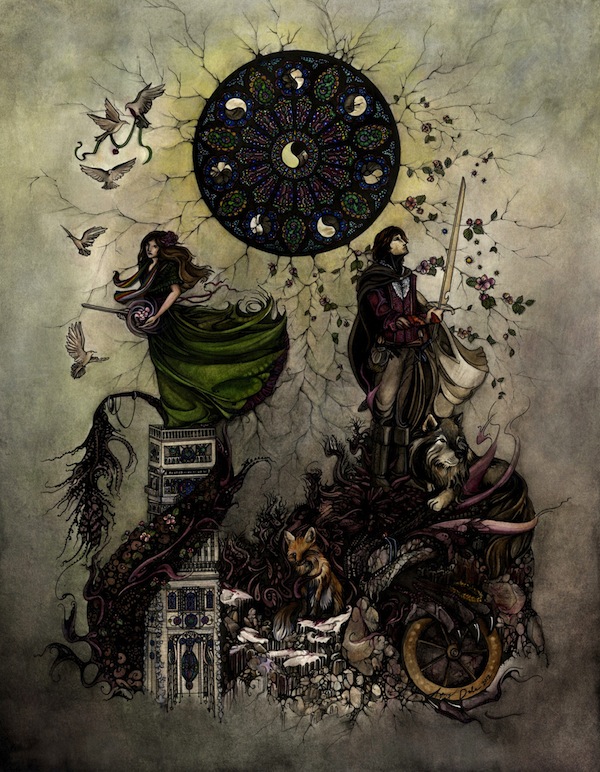 Dragonmount is a dangerous place. Spend enough time prowling the forums here, and I guarantee there will come a point--in my case, halfway through explaining the Compact of the Ten Nations to my husband (His response? "Okay, now tell me the history of India.")--when you realize your obsession with The Wheel of Time has become a supermassive gravitational singularity not unlike a black hole.

Fortunately for Fan Art Friday, there's a fine line between insanity and genius. This week, I asked the Dragonmount staff to share some of their more brilliant Wheel of Time-themed art projects. It turns out I'm not the only staffer that's turned their obsession into a bit of good artistic fun.

I asked everyone to answer the following questions:

1. What is your position on Dragonmount staff?

2. How long have you been on staff?

3. Where are you from? What do you do in real life?

4. Who's your favorite Wheel of Time character?

5. Tell us something random about yourself.

I tried writing up everyone's responses in neat little paragraphs, but the post ended up reading like a page of personal ads for a date to JordanCon. So, I think I'll just let everyone speak for themselves!

How about real life? I'm from Cape Town, South Africa, and I'm a Rental Administrator (we rent out residential properties). I started out my working career as Archivist and Librarian at the largest Church Archives in the Southern Hemisphere.

Favorite character? Oh Lordy, that's hard...I like so many! At the top would probably be Cadsuane, Tarna Feir, Pevara Tazanovni, and of course the complete nutcase Red Ajah Head, Tsutama Rath :P

Something random about yourself? I carry a knife (and know how to use it!) and I used to have a Real Life Warder (a.k.a. bodyguard and good friend). He unfortunately moved to the West Indies, and I miss him terribly, though we do chat online.

Lower left: Elayne as Queen of Andor, with Birgitte as her Captain General

(All these dolls were made using Doll Divine. It's an awesome site and you should definitely check it out. But be warned--it's really addictive!)

Time on staff? A little over 1 month.

How about real life? I'm a native Arizonian. I'm going to school part time to get an English degree, and plan to graduate next year. For my day job, I'm a dog bather at an animal hospital.

Favorite character? Nynaeve was my favorite from the very beginning.

Something random about yourself? My biggest fear is of dinosaurs. Honestly.

Time on staff? A little over a year.

How about real life? Originally the Detroit area, but now residing in Columbus, Ohio. I work at a sign shop.

Favorite character? I...don't think I really have one. Maybe Loial?

Something random about yourself? Besides drawing, I also like building papercraft models.

(Her Wheel of Time art is over five years old at this point, but I loved it and wanted to share anyway!)

Time on staff? Probably around 8 years, give or take.

How about real life? I'm from Israel and I'm a Vet student. About to transition into my last (clinical) year.

Something random about yourself? I watch Korean shows because I find them fascinating. And I really hate mint. :P

Below: Hedgehog! (Hey, there are hedgehogs in the world of the Wheel!)

Time on staff? Four months and sixteen days, but who's counting?

How about real life? I'm from Pittsburgh, PA (read it and weep!). I'm there for doctoral studies in Engineering and Public Policy, which means I spend most of my waking hours banging my head off a computer desk for one reason or another.

Favorite character? I'm obsessed with Mat. Seriously, if he were real I would stalk him. I'm also a fan of Egwene (What? She's got flair.) and Rand.

Something random about yourself? I live on a stress diet of instant coffee and frozen dinners. That, and I've got a peregrine falcon tattoo on my lower back.

Above: Watcher of the Seals

Below: Eldrene (Sketch for a work in progress! Never before seen! Oooh! Aaah!)