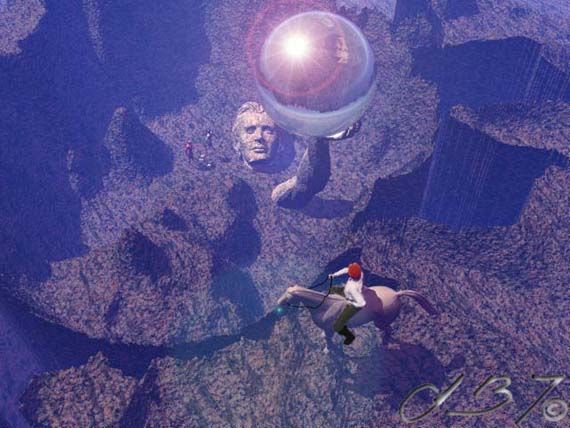 Well, after a long hiatus away from the front of the house, Mashiara was kind enough to let me take Fan Art Friday back from the very capable folks who have been maintaining this blog. It's amazing how much free time I have now that the Wheel of Time is finished.

Anyways, since this blog is, in some ways, going back to the beginning, I wanted to go back to my beginning at Dragonmount and feature the art of one of the first people I met through the site: Joe Trimarchi. Like me, Joe's not around the forums much these days, but the two of us have been good friends for a very long time. In fact, he played my Warder in the RP for several years and volunteered as part of the Wheel of Time track at DragonCon too. He's been an important part of my life for over a decade and I'm pleased to introduce you all to him.

Joe has been making fan art, Wheel of Time and otherwise, since the mid-nineties. That's an eternity in internet time. Some of his stuff looks a little dated, since he works in digital medium, but the strength of the work still comes through.

This is one of those early pieces, "A Time for Iron," based on the chapter of the same name from A Path of Daggers. It's a dramatic scene of Rand's campaign against the Seanchan invaders.

One of the things I've always liked about Joe's art is his willingness to tackle subjects no one else was. When we had a thousand fan art renditions of the Stone of Tear, Joe tried to do something different, like this image of Rand at the archeological dig in Cairhien. This scene is a lovely bit of foreshadowing for the Choedan Kal and their importance in the later books. Joe gives this scene an appropriate amount of mystery.

As technology improved, Joe took advantage and created this illustration of the cleansing of saidin.

If you like Joe's art, check out out his deviantART page. Most of his recent stuff is comic book themed, but there are plenty of gems for Wheel of Time fans.