How Wheel of Time can Win a Hugo Award

Today, December 31, is the deadline to register for the Hugo Awards. 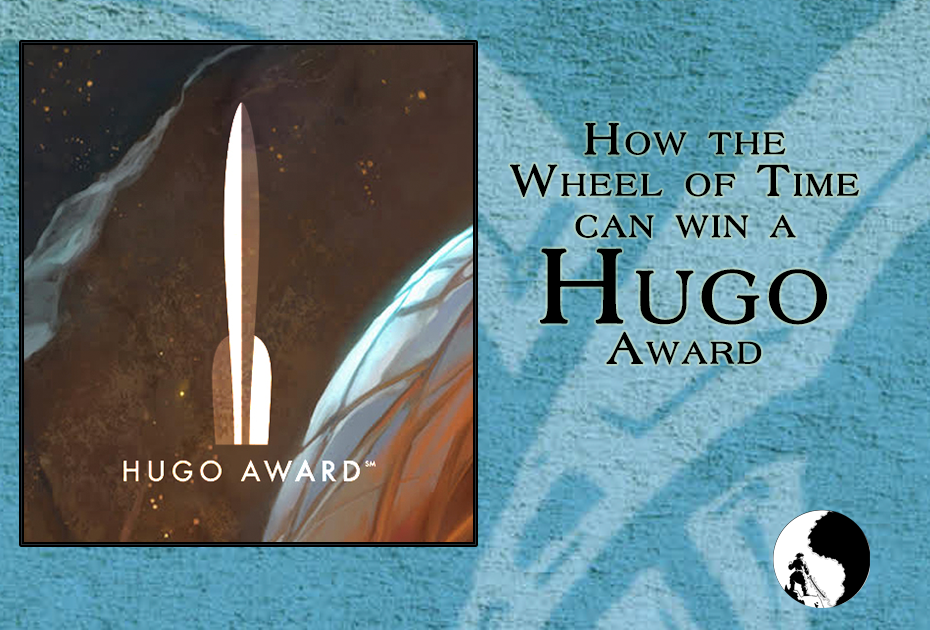 Today, December 31, 2019, is an important deadline for the 2020 Hugo Awards. You can have a unique impact in being part of its tradition, and also potentially help The Wheel of Time and other worthy stories, earn a prestigious award.

About the Hugos Awards

The Hugos are the premier awards for science fiction & fantasy literature. Each year, awards are given in multiple categories such as Best Novel, Best Short Story, Best Series, and more.

Written and dramatic works are awarded at the annual World Science Fiction Convention (“WorldCon”) by its members. Anybody can become a member whether you attend the convention or not.

There are some notable benefits to becoming a WorldCon member, even if you don’t attend the actual convention.  Not only will you have the chance to nominate your favorite written and dramatic works from the past year, but with your membership you’ll also receive most of (if not all) of the nominated works.  ie, You’ll get free books. (Good ones, too!)

There are several notable milestones for participating in the Hugos:

If you plan on nominating for the 2020 Hugo Awards, today is the last day to register for WorldCon and be eligible to vote.

Despite its popularity and far-reaching impact on the fantasy genre, Robert Jordan and The Wheel of Time have never won a Hugo Award.

In 2014 the entire WoT series was nominated for (but did not win) the “Best Novel” award. The "Best Series" category did not exist at the time. WoT’s nomination caused a controversial stir, as some people didn’t feel it was appropriate to consider the entire 15-book Wheel of Time series as one single work. This helped prompt the World Science Fiction Society, which awards the Hugos, to add a new category in 2017, the “Best Series” award.

At the time, it didn’t mean much for The Wheel of Time, but it did enable several other long-running and popular series (including Brandon Sanderson’s Stormlight Archive) to be recognized with nominations and awards.

And now The Wheel of Time will have one more chance to potentially earn a Hugo Award.

Earlier this year, in 2019, Brandon Sanderson published “A Fire Within the Ways”, a short story that was included in the Unfettered III anthology from Grim Oaks Press. This written sequence contained a lng set of “deleted scenes” from A Memory of Light. With Harriet’s permission, the scenes were lightly edited and submitted for publication in the Unfettered III anthology, with proceeds going to support health care needs for writers in need.  According to the WSFS bylaws, any new installment to a written series, regardless of length, makes The Wheel of Time eligible for the Best Series award. Therefore, A Fire Within the Ways makes WoT eligible for the first--and likely only--time.

It’s unlikely that Harriet will ever authorize the publication of any further Wheel of Time stories. This could be our last opportunity to ensure that Robert Jordan’s work receives the recognition it’s due with one of the highest honors that can be bestowed upon a fantasy series.

To nominate WoT, and any other work of eligible fiction from the past year, you need to become a member of the 2020 WorldCon to be held in Wellington, New Zealand this summer. While many of us will not be able to attend due to the distance and expense, but you can purchase a Supporting Membership. This gives you the right to participate in the Hugos, to nominated, vote, and receive convention publications. It also helps support WorldCon, which has a proud tradition of being one of the longest running fan conventions.

It costs money to become a member, but remember that you will not only become of a proud tradition, but you’ll be able to nominate, vote, and participate in the 2020 and 2021’s awards, ad you also receive all of the nominated books and stories in ebook format. That value alone pays for your membership.

What To Do Next

If you want to be a part of this, here’s what you need to do:

What if I missed the December 31 deadline?

No problem! You can still register for a membership and vote for the nominated works. You just won’t be able to submit nominations.

If you’re a fan of The Wheel of Time, you know how big of an impact the series has had on the genre and on people’s lives. By becoming a Hugo Member, you can help WoT receive a special place in history, and also become part of a long-running tradition and receive some great books in return.