Rajiv's Threads In the Pattern: The Apocryphal Epic of Bao the Wyld

Demandred--where he was and what he was up to--was one of the biggest, most consequential mysteries in The Wheel of Time. But somewhere between Lord of Chaos and Winter’s Heart, Robert Jordan changed the truth behind the mystery. In the deleted sequence “River of Souls,” Brandon Sanderson provides a look into the world-building to support the new revelation, and why it all couldn’t be included in A Memory of Light. SPOILERS for all things Demandred. 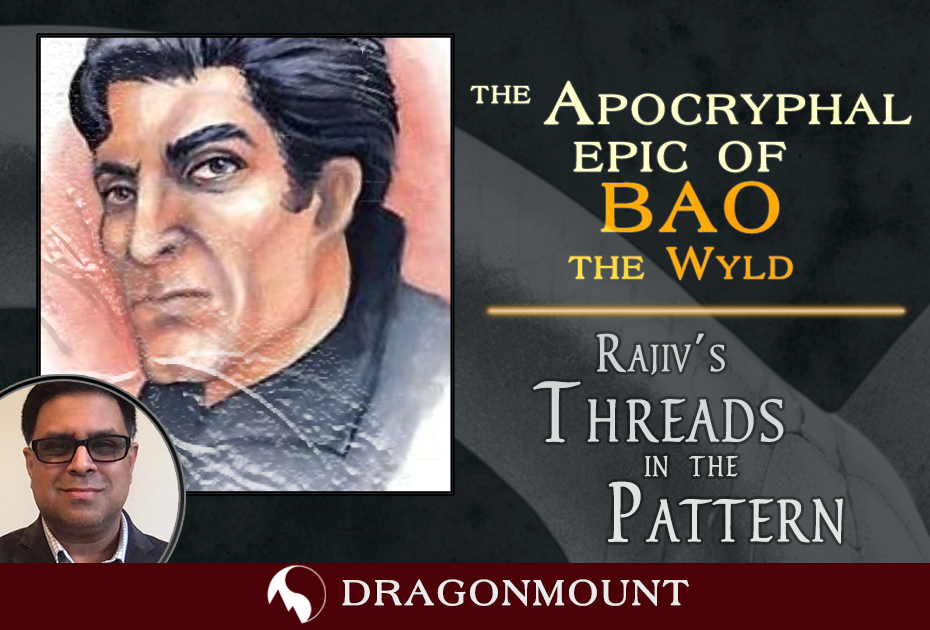 Rajiv Moté is Dragonmount's book blogger with a lens on the craft of fiction writing. When he's not directing software engineers, he writes fiction of his own, which can be found cataloged at his website.

SPOILERS for all things related to Demandred.

One of the most dramatic and exciting single-book plot arcs in The Wheel of Time was in Lord of Chaos. Rand al’Thor announces an amnesty for men who can channel the One Power, and a rag-tag group of untrained men, young and old, answer the call. The amnesty also attracts Mazrim Taim, a False Dragon who is cool and confident enough in the face of the Dragon Reborn to propose an equal partnership. Instead, Rand puts him in charge of training the assembled men, and over the course of the book, those men acquire skill, uniforms, ranks, the name “Asha’man,” and an institution: the Black Tower. By the end of Lord of Chaos, they become an elite military unit, rescuing Rand from captivity and crushing both renegade Aiel and Aes Sedai. The balance of power shifts, and the world suddenly becomes more unpredictable and dangerous.

Demandred knelt in the Pit of Doom, and for once he did not care that Shaidar Haran watched his trembling with that eyeless, impassive gaze “Have I not done well, Great Lord?” The Great Lord’s laughter filled Demandred’s head.

The novel is bookended by our first point-of-view sequences from the mysterious Forsaken Demandred. At the beginning, the Dark One summons him to Shayol Ghul to receive secret instructions, and at the end, revels in his apparent success. This framing, along with the details of Mazrim Taim’s mannerisms, made it clear to readers that Demandred had replaced Mazrim Taim and was now in command of Rand’s most powerful army. Robert Jordan’s notes (24:00) confirm that this was the original plan. But sometime before Winter’s Heart, Jordan changed his mind. The details that were originally foreshadowing became red herrings. There’s a burden when using red herrings to mislead readers. The eventual payoff has to be more satisfying than what readers were led to believe. That was a challenge Brandon Sanderson had to take up when he finished the series.

We knew Demandred was in Shara, and we knew some of what he’d been up to. I wanted to show a glimpse of this. However Robert Jordan--in interviews--had said that the stories were never going to show Shara, at least not in any significant way.


-- Brandon Sanderson, in the foreword to “River of Souls”

When Demandred, calling himself Bao the Wyld, explodes onto the stage in A Memory of Light, he is the most formidable--and most prepared--of the Forsaken. His army of Sharans has the same sort of loyalty as Rand’s Aiel. Their use of the One Power reflects their leader’s long experience of Powered warfare. He wields a sa’angreal mightier even than Callandor. He shows the discipline and focus of a master martial artist, and the skill of the world’s greatest swordsman who does not underestimate an opponent. The rest of the Forsaken look positively frivolous compared to him. What’s better than Demandred in control of Rand’s Asha’man army, disguised as Mazrim Taim? Demandred in control of Rand’s Asha’man through his protégé Mazrim Taim, while bringing into battle another army nobody had foreseen.

Fans of The Wheel of Time should consider “River of Souls,” published in the Unfettered charity anthology, essential reading. The short story is a deleted sequence from A Memory of Light set in Shara. It establishes Demandred’s leadership of the Sharans by putting him on a quest to win a missing part of D’jedt, a sa’angreal second only to the Choden Kal. It hints how Demandred became the Sharan’s foretold savior: the Wy-eld. The Dragonslayer. The Demandred pivot from Mazrim Taim to Bao raised questions. How did he command real loyalty, instead of the Compulsion- and deception-based obedience for which his colleagues settled? How did he mobilize the secretive, isolationist Sharans into an army willing to march on a foreign land under the banner of the Shadow? What has this man been up to for the last two years that made him so different from all the other Forsaken?

Two years ago he had started on this course when he had decided to impersonate a slave among the Sharans. After that had come the revolution, which he had led almost by accident. Through it all, he had sought one thing. Through earning the allegiance of the Ayyad--won at a terrible price--and gaining the fervent loyalty of the Freed. Through the chaos of revolution and vanished monarchs, through the solidification of a kingdom beneath him. Finally, Lews Therin… Finally I have the power to destroy you.

“River of Souls” is an amazing piece of craft. In the space of a short story, it sketches--through allusion and parallels to Rand’s story--an entire epic fantasy running concurrent to The Wheel of Time. As Bao, Demandred had a heroic epic of his own.

Demandred had been building himself up in Shara for months and months, overthrowing the government (Graendal helped with that, unwittingly) and securing his place as a figure of prophecy and power. He had his own story, which could have filled the pages of his own Wheel-of-Time-like series. He had allies and enemies, companions who had been with him for years, much as Rand, Egwene, and company had found during their adventures in the west.


-- Brandon Sanderson, in the foreword to “River of Souls”

Demandred nearly falls in love, nearly has friends, and nearly has an arc similar to Rand’s. But instead of learning the hard lesson of reclaiming his humanity by embracing “laughter and tears,” he allowed darkness and hardness to rule him. In his foreword, Brandon Sanderson says that “River of Souls” accomplished its goals too well by introducing too many new elements at the end of a story, and giving a taste of something that will never be sated, setting up too many unfulfilled promises. Bao the Wyld would never get the epic teased by “River of Souls.”

It’s a fascinating and insightful calculus. A series has a structure, just as a novel does, and there are things you can’t do when you’re closing a series compared to when you’re opening one. Just as the end must pay off promises made in the beginning, revelations in the end that were never raised as earlier questions feel superfluous, no matter how entertaining. “River of Souls” offered a glimpse at a culture that has a fundamentally different view of the Pattern (the Tapestry, in their parlance) and the Dark One. To Sharans, fate was a shackle, and a victory of the Shadow meant liberation from the repeating destinies that the Wheel wove into the Pattern. The Wheel of Time gives few convincing reasons for a person to pledge themselves to the Dark One, but the Sharans offer a look at a belief system that values self determination over fate, which is the Father of Lies’ promise. But up until A Memory of Light, there was never a question of why an entire culture would follow the Shadow.

“River of Souls” sets up Demandred as the most developed and complex of Rand’s adversaries, a more direct opposite number to Rand than Ishamael/Moridin. Perhaps in this, it also succeeded too well. The idea of an anti-Rand, fulfilling prophecies, changing societies, and nearly being a hero on his way to the Last Battle is compelling symmetry. The Wheel of Time contained enough chapters entitled “Threads Woven of Shadow” that it’s not hard to imagine an anti-ta’veren in the Wheel’s cosmology. But Team Jordan’s mission was to finish a story, not launch new directions.  The epic of Bao the Wyld must remain apocryphal. “River of Souls” was a great story that came at the wrong time.