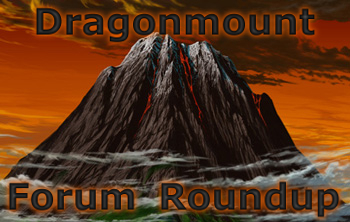 Welcome back to the "Forum Roundup." I'll briefly cover the big news!!! The Wheel of Time television show is moving forward, slowly, but surely. Sony will serve as the production studio! The news was released right before JordanCon 9.

Robert Jordan left us with many thought provoking quotes. "In war, boys, fools kill other fools for foolish causes." I'm curious if this view originated from his own experience in Viet Nam. I previously covered Robert Jordan's military service and decorations. I'd rather picture him in his "carriage house" writing his books. Our own Jason Denzel described the carriage house as having "at least several hundred bladed weapons. Swords, axes, spears, and knives of all shapes and sizes line the walls and shelves of his office." Jason shared a picture with us.

As you can imagine, the news of the television series has set off excitement and speculation at Dragonmount's Social Groups.

The White Tower has multiple threads on suggestions for The Wheel of Time casting. It's loads of fun sharing our thoughts on who should play various characters in the books.

The Dragon Reborn Role Play has seen a surge in activity and characters.

The Band of the Red Hand has been focusing on music.

The General Wheel of Time Discussion has been visited by members who are in the midst of reading the series for the first time! Can you remember when you picked up Eye of the World?

A recap of JordanCon 9 along with details and pictures can be found at the blog of Chez Lannis here.

JordanCon 10 will be held April 20th to April 22nd in Atlanta, Georgia. Our very own Jason Denzel will be the author guest of honor and the artist guest of honor will be Stephanie Law.

You can find information on JordanCon 10 at their Facebook group here.

See you next month!