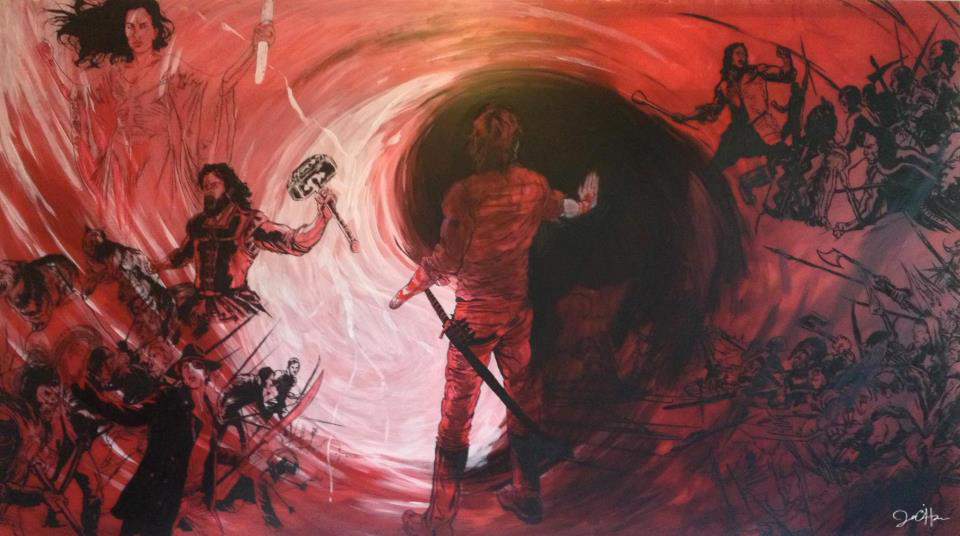 Most of the loyal Wheel of Time fans know Joe O'Hara as one of the podcasters from tWoTCast.  But, he's also very involved in other aspects of the fandom, namely art.  Joe has had Wheel of Time artwork in the past four JordanCon Art Shows, his art has been featured in Ta'veren Tee's yearly calendars, as well as in The Wheel of Time Companion due out November 3rd, 2015.  I had a chance to ask Joe a bit more about his love for Wheel of Time art, and the inspiration behind some of his projects.

Q: Since you have a Bachelors degree in Fine Arts, do you think studying art from an academic standpoint helps you achieve your creative goals?

A: Of course raw talent is essential but studying and refining that talent is definitely important but your environment plays a larger role than most people realize. Being around other artists is kind of like immersing yourself into another language by visiting the country, gaining new perspectives opens up your creativity.

Q: Your "Life In Comics" series looks fascinating.  Have you considered adding yourself into your Wheel of Time art?  Maybe playing dice with Mat?

A: I’ve never actually considered putting myself into my Wheel of Time art, no. I guess because it’s usually a little more serious and less tongue and cheek but I do pose myself as a model for Mat most of the time. Some more obviously than others.

Q: Your artwork features a lot of bold colors.  Does this derive from your passion for comic style?

A: Not intentionally but comics has had an immense influence on my art so it probably bled in there from somewhere.

Q: You've entered artwork at the JordanCon Art Show for the past several years.  At JordanCon 5, your entry, "The Last Battle," was so impressive. How difficult was the project, using only shades of red and black?

A: Thank you. The project was difficult but not because of the shades of red and black, that was actually easier than adding full color. Comics teach your brain to think in black and white. Usually someone draws with pencil and then an inker comes in and adds true blacks, color is the last step. It was sort of like leaving off that last step. Mainly the found object material I used as a surface to paint on was being a real “b” word and not accepting the paint. Took a lot of coats. Also getting that much detail into such a large piece is simply time consuming.

Q: Since it's been released that your piece "For Owyn" will be in The Wheel of Time Companion, can you tell us your thoughts on that particular artwork?

A: Well, I knew I wanted an old west feel. The showdown between Thom and the Myrdraal. That camera angle that takes you between someone's fingers and a pistol. Since Thom was the focus, the Myrdraal took front stage with his sword being drawn. Thom took a few revisions involving the placement of his knives from Team Jordan but the one that crushed me was them telling me he wasn’t wearing his trademark cloak in that scene. He had just given it to Rand so I was told to change it to a normal brown cloak. I knew he wasn’t wearing it, but I was just hoping they didn’t notice so I could draw all those patches.

Q: Does being a member of tWoTCast bring you closer to The Wheel of Time fandom?

A: Short answer, yes, absolutely. I talk to fans all over the world via twitter all because they listen to the show. I try not to shove my art down people’s throats though so I’m not sure how many listeners know I’m a Wheel of Time artist as well. On a local level we do our LIVE shows at JordanCon and that has definitely (a?)effected how close I am with other fans of the series.

Q: Who is your favorite Wheel of Time character?

A: My all time favorite has to be Nyneave and I’m sure a lot of people that know me are calling me crazy right now. She’s a strong, stubborn as hell, badass and I have a real appreciation for her especially in the later books.

Q: Which character do you identify with the most?

I'd like to thank Joe for sharing with us!  I can't wait to see what works of art he'll have for JordanCon next year!  For more information, you can visit Joe's website!