Review of "The Flame of Tar Valon" 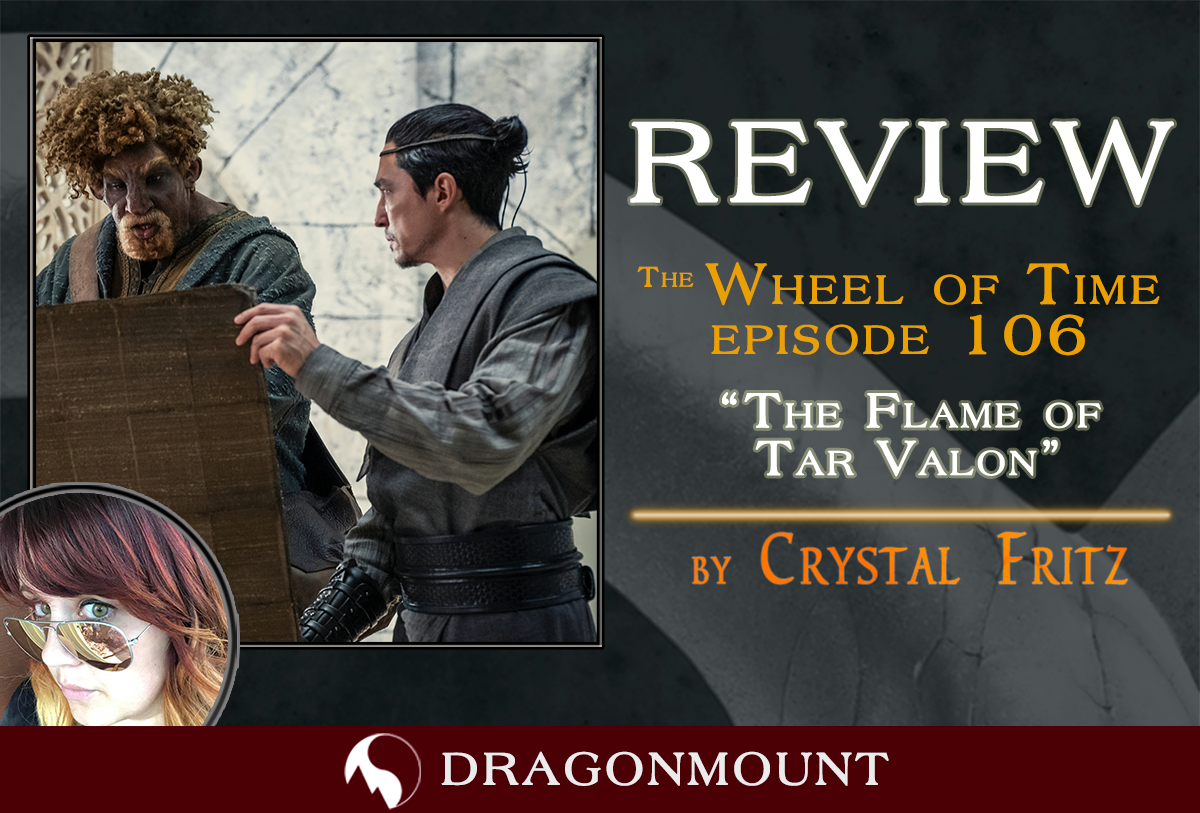 I know many avid book readers do not share my opinion, but nothing has thrilled me more about this adaptation of The Wheel of Time by Amazon Prime Video than the changes. It is a chance for me to experience a thrill again related to the world Robert Jordan created. When he died, and then again when the series was finished, I curled myself up with Crossroads of Twilight, my favorite of the series (don’t at me), and cried. I cried because there would never be new words to sweep me away into the world I had grown to love. Now, thanks to Rafe Judkins and his entire time I am being allowed to fall back into the world over again. Even if every change is not one that I would choose, I am fully enchanted by this turning of the Wheel.

Siuan Sanche (Sophie Okonedo), the Watcher of the Seals, the Flame of Tar Valon, the Amyrlin Seat, daughter of the river, clever as a pike, and strong as the tides, shows us her tenacity and fortitude in Episode 6. We are introduced to her humble beginnings, which makes the power she grows to possess so delightfully shocking. After being shown her life as the fish mongers’ daughter, them living alone on the banks of the river, that they fish every day. All within site of the Stone of Tear.  I feel as if I have more insight into her needs for a companion, a confidant, and lover. Her life appeared to have always been more solitary, a great preparation for a position of power that leaves you completely alone and from a young age she had to keep the secret of her ability to channel. Yet another great preparation for the life she would live training to be an Aes Sedai, in a place where it is well known each woman who calls herself Aes Sedai has her own ideals and goals. Lastly, the loss she suffered at having to leave her father and her only home, created within her a space for Moiraine. Greif and loss tend to make people love more fiercely and tie the bonds you have found in your life even tighter.

Siuan and Moiraine grew up together, ensconced in the Tower politics, as Novices and Accepted. Readers of the novels will know that Siuan and Moiraine’s romantic relationship is more than implied. I believe what we are seeing is two woman who were brought together by an innate shared ability, bound together by their quest to find and guide the Dragon Reborn and sewn together as lovers by the very human need to find someone to share your life. Who better for an Aes Sedai than someone of nearly equal power with whom who share a secret that could destroy the entire world? I am interested to see the ripple effect that their relationship has on the rest of the series.

One of the major changes of these series that has absolutely delighted me is the expansion of Logain’s (Alvaro Morte) storyline and the changes to Liandrin Sedai (Kate Fleetwood). I need more of Liandrin’s pursed lips and haughty stare in my life. I love to loathe her every time she is on screen. Kate Fleetwood and Abdul Salis who played Eamon Valda are tied in my mind for favorite “bad guy” so far in the series. Kate may not look like I had imagined Liandrin in my mind, but she nails her demeanor and adds a depth to the character that was somewhat lacking in the books. I am here for ALL of her evil moments. Based on off handed comments it is clear that Liandrin and Moiraine have a history together. I hope as the see their past continue to unfold. My mind is wondering about jilted lovers? Though Moiraine mentions a man that Liandrin is seeing, so my feelings could be off.

I enjoyed a deeper look inside the politics of the Tower. They used the Sitter Maigan to explain what it meant for a Green and Blue Ajah to speak up in favor of a Red in the Hall of the Tower. Outlining the divides that exist within the White Tower among the women who call themselves sisters. Tar Valon was looked on as a place of safety for the folks from the Two Rivers, but this episode makes it abundantly clear that they are not much safer. The danger has only shifted from Trollocs to women that channel who would use them for their own gain, or harm them for simply being who they were born to be.

Which brings me to an interesting revelation. The possibility of a many headed Dragon. The idea that not just one man or one woman was born to save or destroy the world. As we learn from Siuan and Moiraine’s post coital discussion, “The Dragon will defeat the Dark One or join him.” The fear at the Dragon’s power suddenly hit home when you realize that he, she or possibly they chance joining the wrong side of history. I think it makes the importance of Moiraine’s mission more apparent. We still have not heard the full prophecies of the Dragon, but we know that the Dragon must defeat the Dark One at the Last Battle to save the world.

This episode brings to us the reunion of the Two Rivers folk, who have been separated since they fled Shadar Logoth. The joy of their reunion is short lived as they are faced with a trip through the Ways to reach the Eye of the World. Their mission once they arrive is vague at best and none of their lives are guaranteed. Siuan and Moiraine seem to believe that the Dragon’s presence at the Eye of the World could circumvent the last battle and prevent the Dark One’s escape. The notion seems slightly foolish for two women who have read and studied the prophies and have been engaged in a singular hunt for the Dragon for two decades. With Moiraine certain that one of the youths she brought from the Two Rivers is the one they have sought, it feels as if they are giving in to fear and the unknown. They risk being stilled, cut off from the One Power, and perhaps death.

Watching the series with people who do not know the Wheel of Time, I feel as if this episode is somewhat dialogue heavy and yet fails to give full explanation of what the travelers will face and their purpose. The Ways are a place outside of time and space. They can allow people to travel quickly between one waygate and another in a much shorter amount of time if they know the correct path. It is for this reason that Moiraine needs Loial. The Ogier can read the guideposts in the Ways. In spite of the highly amusing conversation that Egwene and Nynaeve have with Siuan, the Two Rivers five are once again swept off on a journey of unknown outcome with nothing more than a few words to convince them. They travel on the faith of the words of Aes Sedai, for whom the truth you hear is not always the truth they mean. We are led to believe that the prophesies surrounding the Last Battle are so widely known that even their mere mention is enough to sway the lives of Rand, Mat, Perrin, Nynaeve and Egwene. Though as the closing moments of this episode reveal, Mat’s mind was not so easily swayed. It was an interesting way to handle Barney Harris’ departure from the series; a fact that was widely known before the first season aired.

With only two more episodes remaining this season, The Flame of Tar Valon, serves to propel our cast of characters forward into the unknown and a presumed confrontation with who or what waits for them at the Eye of the World. I can only assume we are being set up for a reveal of the Dragon Reborn and a cliffhanger that is meant to draw us forward into season two. There are still a few questions that I hope are answered this season. What is Liandrin’s true purpose? Is Thom Merrilin dead? And what does it mean that Moiraine swore fealty to Siuan on the Oath Rod? With all the changes to the story thus far, I have a feeling that the answers to some of my questions may surprise me. In fact, I hope that they do. For someone who cried as the book series drew to an end, I am enjoying every minute of this retelling.

What was your favorite moment of Episode 6? Let us know in the comments below.