Review of "A Place of Safety" 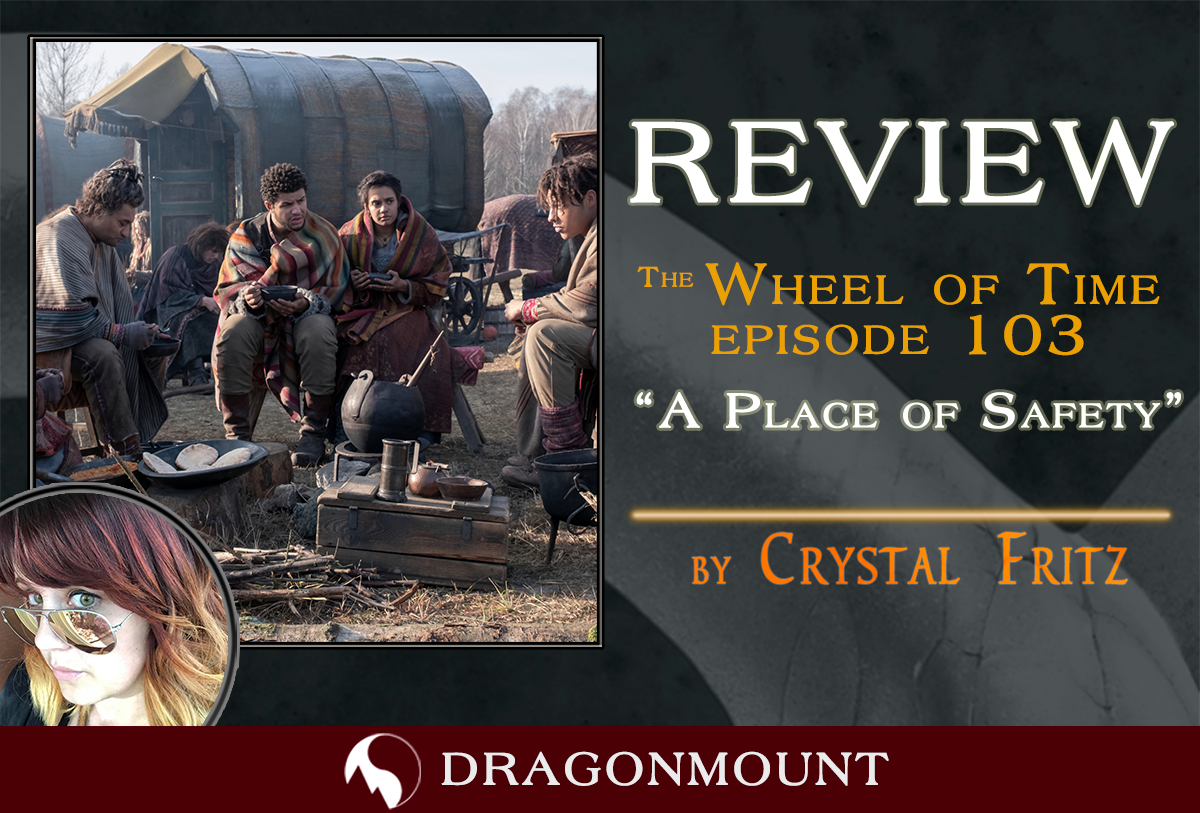 REVIEW: Episode 103: A Place of Safety

To bring epic fantasy adaptations to life, carefully chosen edits must be made. There is a heavy weight of responsibility on Rafe Judkins and his team with The Wheel of Time. Our fanbase is one full of passion and entrenched with heavy expectations. To those of us initiated we know these characters better than ourselves. I encourage fans new to The Wheel of Time to dive in and join the longtime fans in the world of Robert Jordan’s creation. With all of us aware that the story we see before us is just yet another turning of the Wheel: “There are neither beginnings nor endings to the turning of the Wheel.”

Episode three, “A Place of Safety” of The Wheel of Time series by Amazon Prime Video delivers nearly an hour of epic journeys all of which point east towards Tar Valon and the White Tower. They have all escaped the clutches of Shadar Logoth and are scattered to the wind. In a shocking surprise Nynaeve al’Meara has emerged as my favorite heroine. The performance Zoë Robins delivers is fierce and convincing, but it is the subtle changes made to her story that makes Nynaeve shine. While book purists may decry the changes, I insist that in Nynaeve’s case they have only made her stronger; I harken back to episode one “Leavetaking” as she stands with her hand on her knife when the strangers arrive. For character development’s sake they ramp up her hatred for the Aes Sedai, using her former Wisdom and surrogate mothers’ dismissal from the White Tower to draw a hard line between us and them. In episode three the visual representation of Nynaeve’s strength as she escapes her trolloc captor was breathtaking. In the span of only hours her village has been attacked by beasts she had likely believed were only a myth, she had seen her people slaughtered and watched as everything around her was consumed by blood and fire. As a capstone to her induction into her new reality, she is knocked unconscious and headed for death in a trolloc’s belly. Yet, when faced with a situation that would have many giving up or paralyzed with fear she fought on. Not only to save her own life, but to carry on and save her friends.

Nynaeve made use of the sacred pool to save her own life. While we do not yet know its intended use, it is a place of great importance and leant its strength to Nynaeve once again as she hid in its depths and used the trolloc’s own blade to end its life. As the camera pans out, we see the blood filling the pool and resolving into the shape of a Dragon’s Fang. Much like we saw the slaughtered sheep arranged as the Dragon’s Fang in episode one, it is another subtle reminder that the Two Rivers companions are being hunted by the dark. Up to this point we have not learned the true power of the Dark One’s reach, but there are subtle clues if you know where to look.

The largest representation of his strength is seen at the end of the episode when Dana (Izuka Hoyle) is revealed to be a darkfriend and Thom (Alexandre Willaume) gives us clues to what that means. Izuka Hoyle’s performance was the standout in the episode for me. There is a massive amount of character development that takes place during her time on screen. The writing is meant to make us feel for her plight, stuck in the mining town where she was born and likely will die, but it is the fervor with which she delivers her diatribe to Rand and Mat that had me kicking my heels with excitement. Her death was necessary to allow our pair to escape, but I was crushed that we will not see the crazed light in her eyes again.

One theme that we see delivered again and again is the commitment and loyalty the Two Rivers folk have to each other. Both Rand and Egwene, though separated by miles, each have the desire to make sure that the other is okay. Their relationship may be in shambles, but their love and loyalty are still strong. Even Mat who waivered the most in his desire to abandon their quest to the White Tower and return home, sticks with it when the road gets rough. If they stick to the source material, the themes of loyalty and obligation will be repeated again and again.

Due to the extensive travel that takes place in “A Place of Safety” I feel that in this episode the world truly begins to expand. We start to see more of the people who inhabit the land outside the Two Rivers, with heavy handed hints of even more to come. World building on this scale must be a challenge and some of the information felt a bit forced. Such as when Thom explains to Mat more about the Aiel. The most egregious information dump happens when Perrin and Egwene meet the Tinkers. This story is highly altered from how it takes place in the book and as of yet I do not understand the why. There is an intermediary in the books who guides Perrin and Egwene instead of the wolves alone.

The Tinkers, or the Traveling People are a band of pacificists and wanderers who believe that everyone should do no harm. As I read the books, they always gave me hippie vibes. They were one with nature, vegetarians who wore brightly colored clothes and welcomed everyone to their fires. Never settling in one place for too long. Their way of life was known to be intoxicating to children and youth, which was why most villages and towns didn’t not welcome them near their borders. Even in the secluded Two Rivers they had heard rumors of the Tuatha’an. This is not the case in this turning of the wheel. Visually the Tinkers are ‘darker’ than I had pictured. Their colors are more muted and their demeanor more reserved and less jovial. Perrin and Egwene have also not heard of them, and it is Aram’s (Daryl McCormack) forced telling that felt out of place. Their lack of preconceived notions seems like an interesting omission. The only conclusion I can draw is that they are attempting to illustrate how isolated the Two Rivers folk were before beginning their journey. With so much history and lore to get across on screen there are bound to be a few stumbles such as this along the way. It was not enough to bring me out of the world.

So much of this episode is building for what is to come. We are being led through a world of Jordan’s creation as seen through Rafe Judkins eyes. I can see that he is trying to share with us the Power of women and the strength that can be taken when relying on others. The question that kept coming up for me is, “Who can we trust?”

We know that Moiraine can speak no word that is untrue, but she never says what she intends to do with the potential Dragon reborn when she gets him or her to the White Tower. While Aes Sedai seem more well known to the Two Rivers folk than they were in the novels, the mysteries of what an Aes Sedai can do with the One Power remain a large unknown. She is currently injured and was asleep for most of this episode, but her powers could still be at work. Is it her work that causes the wolves to herd Egwene and Perrin towards the Tuatha’an? Or is it indicative of him being the Dragon? He is the only one we see have another dream this episode. Does the fact that Egwene can channel point to her as the one Moiraine seeks? Rand’s super strength that is showcased as he breaks free of Dana could be an indication that he is the one? Mat feels like the least likely candidate at this point, but we are staring to notice strange behavior from him as well. At this point we only know who the Dragon was, not who or what he or she will be.

There is a bomb that drops in the last few moments that seems to shock even our characters to our core. As Dana reveals that she dreams of the FIVE of them, we are led to believe that Nynaeve should also be considered for the Dragon reborn as well. Her expanded strength may mean that she is where our eyes should be pointed in our search to decode who has been reborn as the Dragon in this turning of the Wheel. In future episodes we all need to be careful observers of the clues that are being left for us.

The recent revelation that Nynaeve could be the one Moiraine was wanting, even if she does not know it yet, makes the fact that the episode bookends with Nynaeve’s appearance highly appropriate. The last words spoken this episode were delivered by the deliciously smug Liandrin Sedai. “Didn’t you hear? We captured a man calling himself the Dragon Reborn.” This puts the mission Moiraine set out to accomplish; bringing the Dragon reborn to the White Tower so that he can be guided, is in peril, as is her life. Who is this man that Liandrin captured? Book readers will have an idea, for everyone else hold tight. His expanded story line is certain to be something we can all enjoy discovering. If the menacing look in his eye is any indication, he has been captured, but not beaten.