After months of secrecy, the first official photographs from filming have been released! 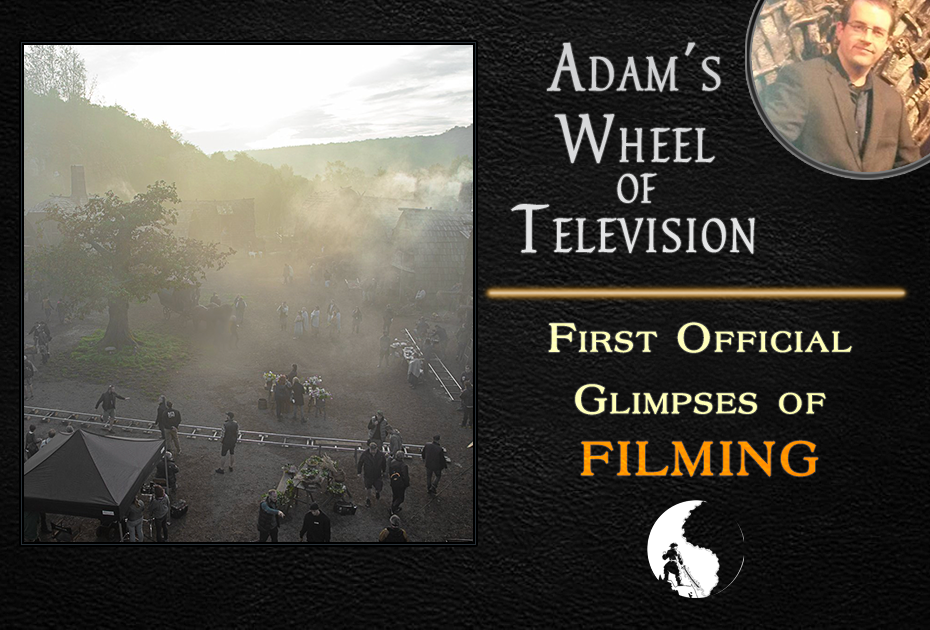 Official glimpses of filming on The Wheel of Time TV show have been few and far between so far. Amazon has surrounded filming with an aura of secrecy and the only shots have been leaked photos snapped by eager fans. We’ve so far not published these out of respect for the production team’s wishes. However, there have been signs of this being relaxed somewhat in recent weeks. This week, the production even released a behind-the-scenes shot of the first day of filming. 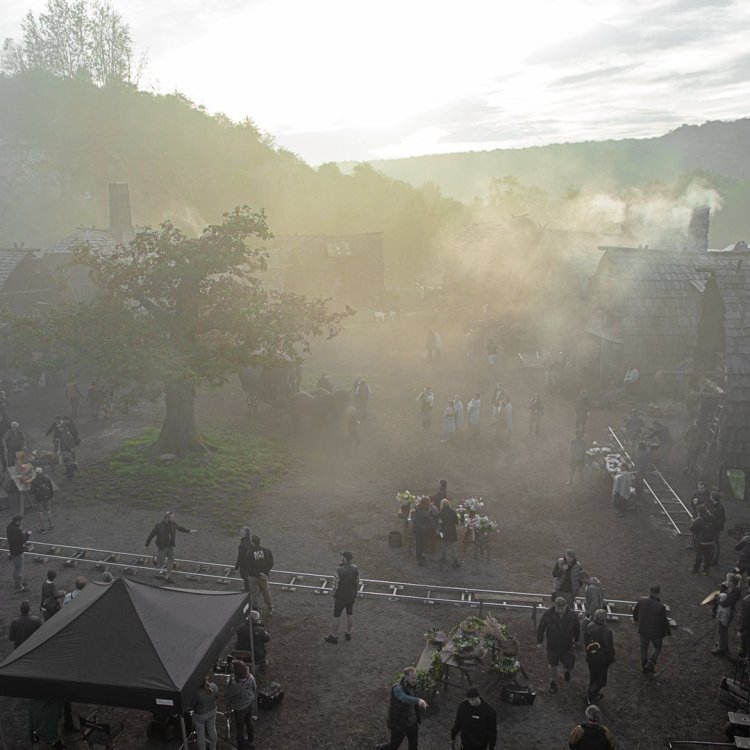 This shot is impressive, showing a significant amount of work has been done on building a chunk of the village for real. At least five fairly big buildings have been constructed, one of them presumably standing in for the Winespring Inn. What appears to have been an artificial tree has also been added to the location. Curiously, the village’s infamous Green is not present and the tree is standing somewhat incongruously by itself, but perhaps more greenery will be added in post-production. The lack of thatched roofs suggests that Cenn Buie has a different profession, or perhaps there are buildings elsewhere with thatched roofs.

We know that the first scene shot for the series was Padan Fain arriving in Emond’s Field, the largest town in the Two Rivers, so it’s a good bet that this show shows us what Emond’s Field will look like on the show.

A covered wagon and horses can be seen behind the tree, which is likely Padan Fain’s wagon, with a group of actors visible in dressing gowns. Also visible are the dolly tracks which will be used by cameras to take sweeping shots of the location.

A few weeks ago, they also released the first shot of filming, showing Josha Stradowski as Rand al’Thor against a dramatic mountain backdrop. It’s a fair bet this is from early in the story, when our initial band of heroes are fleeing the Two Rivers for their lives with the Mountains of Mist dramatically looming in the background.

We’ve heard reports over the shooting period that the team has been filming in snowy locations. This of course contrasts with The Eye of the World, which mostly runs through spring and the snows have melted (apart from on the mountains in the background, of course). Avoiding snow during shooting has been impossible, since the filming period started in September and has run straight through the winter in Slovenia and the Czech Republic, where snow is a common occurrence in mountainous regions such as the Sudetes and the eastern Alps.

My suspicion is that the show will eliminate some of the snowfall in post-production or, more likely, will explain that the snowfall has lingered longer than normal into the spring.

With filming now more than half-complete and due to wrap in May, it’s interesting to speculate on castmembers who have not yet been confirmed on the series. As of today, we still haven’t had roles such as Elayne, Morgase, Galad, Gawyn, Elyas Machera, Agelmar, the Bornhalds or Min confirmed (among many others). This may indicate they will not appear until later in the season or they have been working but not been announced yet. In addition, we are still unaware of what role Maria Doyle Kennedy will be playing (although she did react coly to the question of if she will be playing Elaida, whilst ignoring all other suggestions; read into that what you will).

On a related note, I’ve also seen some questions recently about why the production has not been casting more North American actors. As of today, the only American actors confirmed on the show are Daniel Henney as Lan and Taylor Napier as Maksim, whilst Jennifer Cheon Garcia is Canadian.

There are a few reasons for this. The first is that this is an international production drawing on the broadest possible casting base. There are several actors from the UK and the Republic of Ireland, but there are also actors from Spain, India, Australia, Denmark and the Netherlands. As such, two actors from the USA is not a massive underrepresentation.

There are also other factors involved. The production is based in Prague and for recurring castmembers (those not in every episode) with other jobs going on, having to travel back and forth from North America to the Czech Republic between filming blocks might be impractical. The studio may also have budgetary restrictions in place limiting how many flights they will pay for; at least one of the reasons why Conan Stevens did not return as Gregor Clegane after Season 1 of Game of Thrones is because the studio was unwilling to pay to fly him back and forth from Northern Ireland to New Zealand, where he was filming The Hobbit trilogy. For actors based in the UK and Ireland, where Prague is only a couple of hours flight away on cheap airlines, this is much less of an issue.

It also depends on the profile of the actor involved. If a major American name expressed a desire to be on the show which would boost its profile, it’s likely that Amazon would pay for that to happen. The Wheel of Time is first and foremost an ensemble piece, less reliant on outright star power beyond the few well-known actors that have been cast already (Kennedy and of course Rosamund Pike as Moiraine).

As always, more news as we get it.