The Wheel of Time Season 1 finale gave us our first look at the Age of Legends. But how does it compare to the books? 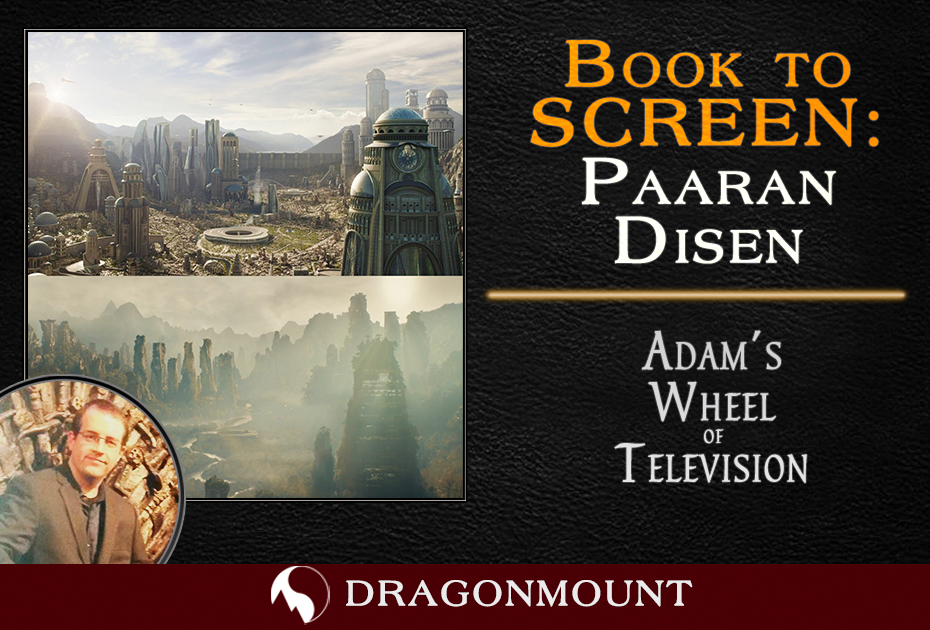 The Wheel of Time first season finale gives us the first look at the Age of Legends, the storied era of history that ended in the Breaking of the World and the corrupting of the male half of the One Power, some 3,400 years before the start of the main story in the books. It’s only a brief glance – we have less to go on here that during our previous deep dive on Tar Valon – but it’s an interesting look at one of the more intriguing parts of the backstory.

It appears that this city is Paaran Disen, the greatest city of the Age of Legends. During the Second Age, the idea of nations and kingdoms disappeared and the whole world was united under a single global government, albeit a relatively loose one. That government was based in Paaran Disen, which was also the location of the Hall of the Servants, the ancient equivalent of the White Tower. The Hall of the Servants was merely the headquarters of the worldwide guild which was the Aes Sedai in that Age, rather than being the home for all of them as the White Tower is. With 3% of the population serving as Aes Sedai, their numbers ranged comfortably into the millions, if not tens of millions, and most lived in their own homes, pursuing careers which may or may not have been related to the Power (Lillen Moiral – Moghedien – was an investment banker, despite being a powerful channeler, whilst Mierin Eronaile – Lanfear – was an advanced researcher into new applications of the Power).

Paaran Disen was effectively the world’s capital, although it is unclear that the population of the world in the Age of Legends was, if it was comparable to our own (with more than 7+ billion people) or if improvements in birth control, medical technology, Healing and sustainability meant the population was less than during our age. This may explain why Paaran Disen appears to be a somewhat small city by our standards, though still enormous by the standards of the Third Age. Of course, the building where Lews Therin meets Latra Posae might be on one edge of the city and the city sprawls for a considerable distance in the opposite direction which we don’t get to see.

In the books, Paaran Disen had many of the hallmarks of civilisation in the Age of Legends. Many of the streets and parks were lined with chora trees, which gave a sense of peace and well-being to those who sat in their shade. The buildings were tall, ornate and beautiful, many built of elstone, which made them shimmer in the light. The entrance to the Hall of the Servants was flanked by tall columns. The city was divided by roads along which vehicles such as jumpers and jo-cars could travel. As the grandest city in the world, Paaran Disen was also served by transport such as sho-wings, great delta-winged vehicles capable of carrying up to hundreds of people anywhere in the world in short order. The city also had numerous locations marked for Travelling, allowing Aes Sedai to open portals directly to wherever they wanted to go. 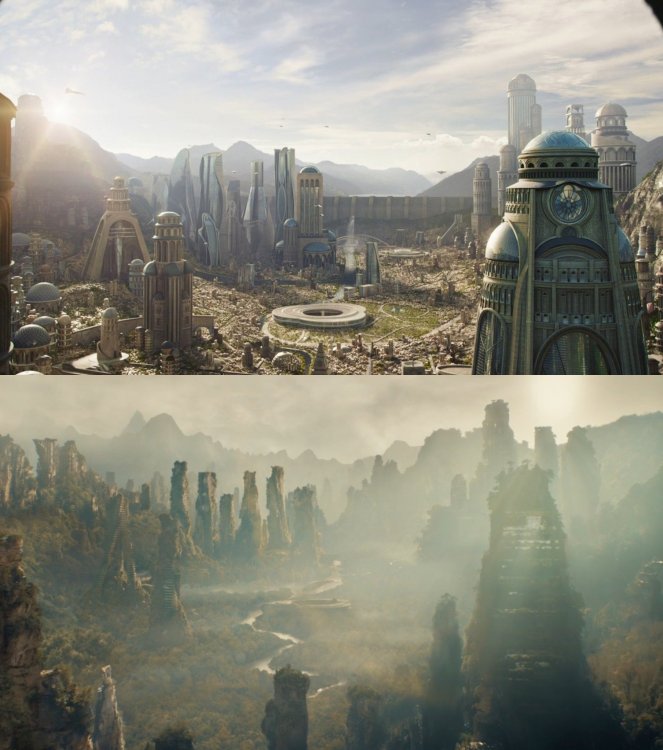 Above: Paaran Disen in the opening of the first episode. Below: The same city in ruins in the prologue to the season finale.

During the War of the Shadow, Paaran Disen served as the base of operations for the Light against the Dark One’s forces. Lews Therin Telamon, First Among Equals of the Aes Sedai and effective military commander of the forces of the Light, the man history calls “the Dragon,” seems to have made his stand in Paaran Disen, indicating it was located far from the front lines of the war, at least when it began.

At a key point during the war, the forces of the Shadow reached Paaran Disen and achieved a major victory. However, Lews Therin was able to defeat Elan Morin Tedronai, known as Ishamael, before the gates of Paaran Disen, indicating the Shadow was not able to exploit its victory and hold the city. Be’lal later led an assault that managed to at least partially destroy the Hall of the Servants, although enough of the building survived for it to continue to serve as the Aes Sedai’s headquarters.

Later, during the closing stages of the war, Lews Therin’s strike on Shayol Ghul gave hope that the conflict was about to end. Although the assault successfully patched the Dark One’s prison and cut off the entity from its followers, the Dark One was able to corrupt saidin, placing a rotting taint on the male half of the True Source. Every male channeler in the world started to go insane. Within days or weeks, people were fleeing the city en masse. Several former male Aes Sedai apparently levelled the city with the One Power afterwards in their insanity. Whatever survived was obliterated in the Breaking of the World. By the end of the Third Age, not a single trace of Paaran Disen remains and its relative location in the new world is completely unknown. It might be at the bottom of the ocean or buried under the Spine of the World.

In the TV canon, whilst the War of the Shadow has curiously not been directly mentioned so far, it is unclear how much of this remains true. The city appears more peaceful than you might expect at the end of a ten-year war (and a century-long societal collapse preceding it) which has seen the city attacked several times already, and there are more jo-cars and jumpers and hoverflies in the sky then apparently was the case at the end of the war, when the Shadow overrunning or destroying factories and industrial areas had forced many of the armies of the Light to rely on swords, bows and horses instead.

The name of the city is also interesting. “Paaran Disen” suggest “Paradise,” whilst “Paaran” means to mate or to pair in German, potentially a reference to the gender parity of the Aes Sedai in this Age. “Disen” may be derived from the Dísir of Norse mythology, a vein of myth that Robert Jordan mined for many ideas and names in The Wheel of Time.

In the TV image you can also see a sports stadium, roads and plenty of tall buildings whose shape and size are echoed in the White Tower of Tar Valon, built three to five centuries later with the last vestiges of knowledge from the Age of Legends. The vibe is a sort of timeless Greco-Roman elegance, fusing the old and the futuristic, which certainly seems to fit what Robert Jordan describes in the novels.

More interestingly, if you go back to the end of the prologue to the first episode, we get to see the same city in a state of dilapidated disrepair in the modern age. Most of the buildings map 1:1 on the buildings from the later image, with a few exceptions which were destroyed or have been lost to the overgrowth of trees and vegetation. The buildings’ outer shells have been stripped away or destroyed, leaving behind only the cores.

This is of course a deviation from the book situation, where Paaran Disen was destroyed by crazed male channelers and then whatever was left behind was completely obliterated in the Breaking of the World. It is no longer possible to say where Paaran Disen was in relation to other locations. In the TV show, the ruins of the city are still standing, though it is unclear where (it is from this location that Moiraine and Lan set out to travel to the Two Rivers, but it is not said if that was a lengthy journey across the entire continent or a closer location). This immediately sells the “post-apocalyptic” vibe more obviously than the books do, as the books wait a while before bringing in ruins and artefacts from the Age of Legends, or even our Age which precedes it.

The production team have indicated we will see more of the Age of Legends later in the series, and it’ll be interesting to see how they continue to realise it on-screen.