The Wheel Turns: A Game of Stones 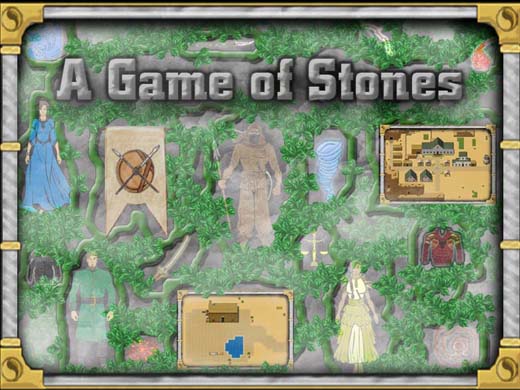 [Editor's Note: Ireond, our Humor Blogger, is filling in the role of Rotating Features Blogger because he wanted to share a more in depth look at A Game of Stones with the Dragonmount community.  He's been playing for awhile and has a better insight to the attractions of the game.  Fnorrll will return next week with "The Wheel Turns."]

A Game of Stones is a browser based multiplayer role playing game set in The Wheel of Time universe.  Currently in its eleventh version, players can choose a nationality and class and then go explore, fight, and earn money to their hearts content, or at least until the Last Battle.

The basic overview of the game:

Character creation consists of choosing a nationality for your character, and then picking a basic class.  As you gain levels, you open the opportunity to build estates in wilderness areas, gain profession points which can be used to buy businesses in town and gain other bonus, and eventually gain the option to add more classes to your character.  Classes offer a skill tree with various bonus stats, and every level, you are given skill points to customize your character.

Players are ranked by experience, alignment, and Ji. Experience is a pretty standard affair, you attack non-player characters (NPCs) or players, and gain experience accordingly.  Alignment is how your actions have defined you in terms of leaning more towards the Shadow or the Light.  Ji is an interesting factor, and affects a fair amount of game play.  Each action you do brings you honor.  As you rise in honor, your standing in the game rises as well, but the true benefit is when you're a member of a clan, as your gain in honor carries over to them, allowing them to take control of the local towns.  Towns have shops where you can purchase gear and temporary bonus items, as well as restock your stamina; the clans can invest in upgrades, allowing you to gain bonuses from towns that your clan controls.  Lose the town though, and you lose those bonuses.

Combat is limited by each character only gaining two combat points an hour, but you are allowed to bank up to a hundred, allowing you to walk away from the game for long periods, if you desire, and not falling behind.  However, movement is determined by stamina, which can be replenished by resting or using an inn at a city, allowing you to move freely completing non-combat quests if you wish. You can play with your stats, change equipment around, and hang out on the clan or world chat boards while waiting for combat points.

The early game consists of securing towns for clans and leveling up your character.  You can compete in tournaments, build a commercial empire, or just run around completing quests.  Eventually the seven seals to the Dark One's prison will appear, and then they start breaking.  This is the point the current game is at now, but that means the fun is just beginning.

You see, the Last Battle is coming.  Hordes of NPCs will be descending and doing their hardest to make sure the towns are wiped off the map.  Then players will be divided by alignment and fight for all creation.

Then, the Age ends.

The next version comes out, where a new Age will unfold, and a new battle for creation will begin.

Which side will you fight for?

Swing by A Game of Stones and take a look.

I spoke with Tim Jensen, current programmer and administrator for "A Game of Stones."

Q: When did the game first start, and when did you take over?

A: I'm not sure on exactly when the game first started. I first started playing in the Summer of 2003, which I believe was towards the beginning. After a releasing couple different versions of the game, the original Creator, Craig Harrison, decided he wanted to move on and posted the source code online in May of 2007. I took the code, made a few modifications I thought would be nice and launched my first version in September 2007.

Q: What is the one aspect about the game you feel brings in the most players?

A: Honestly I'd have to give credit to the Wheel of Time for that one. I'd estimate about 90% of the vocal users of the site are fans of the books that checked the game out due to their love of the series. Though even if you haven't read the books, the game is still accessible. It's really a pretty standard RPG game with a Wheel of Time skin on it, though I've tried to get as many details right as I can while keeping the game balanced.

Q: What do you feel attracts first time players?

A: Beyond the idea of playing a Wheel of Time game, I'd say that it's the fact that it's an online game that can suck up as much or a little of your time as you want and you can still be fairly competitive. That's something I've tried to strive for with how the game is set up. Some people complain about the limited turns players are allotted, but to make up for it each person can have 3-6 characters. Keeping up with that many characters and fully taking advantage of all the game has to offer with each of them can suck up a lot of time if you let it.

Q: What do you feel keeps players coming back for each new version?

A: This one I have to give to the GoS community. They've kept the atmosphere of the game friendly but competitive. It's always interesting to see how things play out each version. Alliances shift from Age to Age and the new players and clans that pop up add a wrinkle into existing dynamics. Another thing I've tried to do is be responsive to what the players want for the game (within reason). Most of the changes that I have made have been at the suggestion of the players. With each version has come something new and I hope it the thought of seeing what's next keeps players coming back.

Q: If you had a tip for players that are new to the game, what would it be?

A: Don't be afraid to ask questions. I openly admit that my weakest point is documenting how things work, so the game can be a bit overwhelming for new players. Luckily, the existing player base is quite friendly to new players and quick to answer questions. I suggest joining an existing clan your first time through rather than creating your own. That way you can learn the ropes from the more veteran players and hopefully make a few friends in the community along the way.

Q: What made you decide to institute the last battle?

A: Two reasons. One, I originally planned to launch V10 in February of this year, so that would have been within 1 month after AMoL released so that seemed fitting. More importantly was the need that each "Age" of the game needed a firm ending. In previous versions, people would play for a month or so, then gradually let their characters fade into neglect. By adding the Last Battle, there's a point that everything is working towards so people know what's coming and how much longer things will keep going. Hopefully it will keep players engaged to the end.

Q: What do you see in the future for this game?

A: I honestly don't know. I hope the game continues to thrive. This last version has been the most successful yet since I've taken over, so hopefully the trend continues. I still have plenty of ideas on where the game can improve. So as long as people keep playing and I have time to work on it (thanks to my wife for putting up with me!), I'll keep releasing new versions.