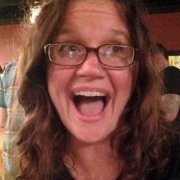 Affecting change out in Randland or as Sitters in the Hall, who’s the biggest badass of them all? 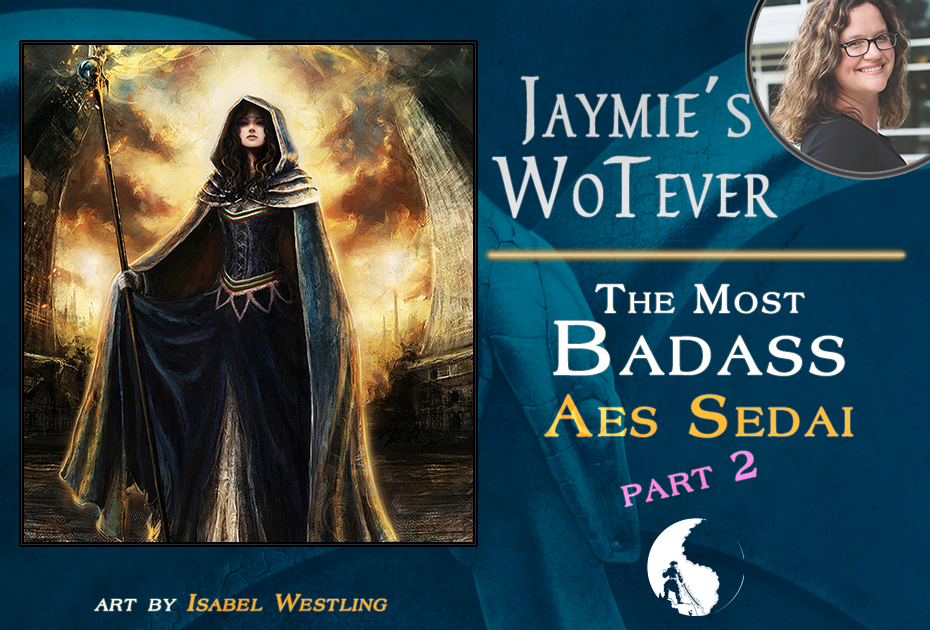 Jaymie here. I’ll be discussing a wide variety of topics related to The Wheel of Time. Like many of you, I’ve been reading WoT since the Age of Legends, so we’ll have lots to cover together…WoTever comes to mind.

In this series, I’ll take a look at our own G.L.O.W. – the Glorious Ladies of WoT. Specifically, the smooth-cheeked, serenity-filled, skirt-smoothing, shawl-adjusting, butt-kicking Aes Sedai. I’ll select the most badass sister from each Ajah, as well as a runner-up for the title.


In Part One, we chose out the most badass Aes Sedai of the Green, Red, and Gray Ajahs.


The Ajahs of Part Two can claim some no-brainers: is there really any question as to the most badass Aes Sedai of the Blue, Yellow, and Brown Ajahs?


But we love talking about them anyway, and their runners-up are truly deserving of the Badass distinction.


Here’s the rundown of the Most Badass Aes Sedai of the Blue, Yellow, White, and Brown Ajahs.

Moiraine is calm serenity and intense drive. She shows us (and Randland) what it is to be Aes Sedai, and we measure all others against her.

She’s our first. Our last. Our everything.*

“There is a saying in Cairhien, though I have heard it as far away as Tarabon and Saldaea. ‘Take what you want, and pay for it.’ Siuan and I took the path we wanted, and we knew we would have to pay for it eventually.” – Moiraine (Fires of Heaven, Ch. 15, What Can Be Learned In Dreams)

Siuan as the next-baddest Blue may need no explanation, but let’s do it anyway:
As a young Accepted, she attained knowledge that could literally kill her. Instead of running from it, she takes up the cause, knowing the risk (death, or worse yet, stilling) from the start. She is skilled in solving puzzles, seeing patterns, and maneuvering others without their knowing. And let’s not forget the icy blue gaze at which even the most powerful monarchs flinch.

After the unthinkable happens, she doesn’t lay down and die, as most stilled women are known to do. She fills with purpose the hole left by her inability to channel. And it’s a badass purpose: revenge on Elaida.

Finally, she advises her extremely young and inexperienced successor, a role seen by others as a blow to her pride. But when Siuan realized that Egwene “would be an Amyrlin to make thrones tremble,” she freely threw in her lot and began helping Egwene accomplish her plans. (Lord of Chaos, Ch. 37, When Battle Begins)

A discussion of Nynaeve’s accomplishments, acts of bravery, and…ahem…distinctive worldview could fill up its own essay. Hmmm…maybe check back in a few weeks 😊

Romanda Cassin had the makings of a badass, but let her stubbornness over nemesis Lelaine dictate her actions. Doesine Alwain, a Black Ajah hunter in the Tower with a penchant for cursing, also deserves a look. And after being captured as a damane and escaping with Mat’s help, Edesina Azzedin tries to convince Tuon to form a truce with the White Tower, making her one of the few former damane that can approach a Seanchan without cowering in fear.

Corele’s fun personality and wild appearance make her interesting; her skill with Healing and her contribution to one of the major moments in the series make her a badass.

After helping to Heal Rand’s Shadar-Logoth-dagger stab wound, she bonds Asha’man and super-talented Healer Damer Flinn, making them the Healing power couple. Corele Heals and assists all over the place, essentially following Rand where she’s needed. But her claim to runner-up fame is helping to protect Rand from the Forsaken Demandred’s attacks as Rand cleansed the taint on Saidin; linking with Damer and Sarene Nemdahl, the three of them driving Demandred away helped ensure Rand’s victory.

Even after an encounter with Shaidar Haran, Corele recovers and keeps on going, lending her Healing all the way through the Last Battle.

Members of the White Ajah, devoted to questions of philosophy, logic, and truth, are generally seen by other Aes Sedai as cold and detached women who consider shows of emotion pointless, as they cloud logical judgement.

For the most part, readers don’t see much to indicate otherwise. Alviarin Freidhen’s POV sheds a little light at times, but, as a member of the Black Ajah, she’s not a true White. Carlinya Sorevin, as one of the six sisters who “advised” Egwene upon her raising in Salidar, saw some screen time, but still not enough to determine her level of badass.

However, two White sisters in particular stand out in the later books.

Daigian spent 27 years as a novice and 21 years as Accepted. Read that again.

Daigian is the absolute weakest in the Power of any woman currently wearing the shawl. Knowing full well how other sisters would perceive and treat her, and how she would rank in any size gathering of sisters, she still spent 48 YEARS training to be Aes Sedai. And she did this without knowing that, through her achievement, she would aid the world in its time of greatest need.

What she lacked in Power, she made up for in immense intellect. She had the respect of fellow Badass Cadsuane Melaidhrin (see Part One), who knew Daigian was much more than a messenger or tea server for other Aes Sedai.

Uncharacteristically for a White, Daigian bonded a Warder – young Asha’man Eben Hopwil. She was distraught when their heartwarming relationship ended in Eben’s death, but she refused Nynaeve’s offer to attempt to “heal” her grief. Daigian wanted Eben’s memory to remain alive through her pain.

Daigian herself was taken out by one of the greatest villains of the Dark, Shaidar Haran, while she guarded one the most-feared Forsaken, Semirhage.

This woman was a badass.

Ferane Neheran, Sitter and First Reasoner, is a pretty cool White, known to actually show emotion here and there and possessing loads of intelligence. An exchange during one of Egwene’s private “lessons” in the Tower showed Ferane to be thoughtful and willing to listen while still maintaining her authority. She might have been in the running if we’d had just a little more screen time with her, but we didn’t, so…

Seaine scores major points for being a Black Ajah hunter in the Tower, but also for being super tight with Red Ajah Badass Pevara Tazanovni.

Better known to readers since we are more often treated to her POV, we know that Seaine (inaccurately) interprets an order from Elaida as a directive to search for Black sisters within the Tower. From there, she exhibits some badass traits: she recruits a smart, strong woman to help achieve a goal and she courageously continues even when she’s scared out of her mind (especially after her first Black sister discovery).

Even though Seaine can get a little whiny, she trusts her logic to help her power through uncertainty and follows sense when she sees it.

“Please see that they know, although the word Black may brand my name forever, my soul is Brown. Tell them…”
“I will, Verin,” Egwene promised. “But your soul is not Brown. I can see it.”
Her eyes fluttered open, meeting Egwene’s, a frown creasing her forehead.
“Your soul is of a pure white, Verin,” Egwene said softly. “Like the Light itself.”
Verin smiled, and her eyes closed.
(The Gathering Storm, Ch. 39, A Visit From Verin Sedai)

Please. Take a moment for yourself. Just leave the crumpled tissue there next to you. Resume reading when ready.

At age 264, this woman comes out of her peaceful retirement (along with her sister, Vandene) upon learning the Dragon is reborn.

She joins up with Moiraine and Co. and ends up fighting Shadowspawn, traveling to Salidar to hang with the Rebels, and jetting off to Ebou Dar for business with the Bowl of the Winds…and maybe to check in on some Tower runaways. After 30 years of the quiet life, Adeleas comes out calmly swinging for the good guys.

Though her jump back into the fray ultimately cost Adeleas her life at the hands of the Black Ajah, Vandene was able to avenge her sister just before her own death. The death of the Nemelle sisters was among the most heartbreaking in the series, but also among the most badass, as they fought evil until their final breaths.

Part Two concludes! Did I miss anybody this time? Who do you think are the most badass Aes Sedai of the Blue, White, Yellow, and Brown Ajahs? And can you believe, there’s a Part Three still to come!

*paraphrasing credit to the Walrus of Love himself, Mr. Barry White