Fantasy Review: The Way of Kings 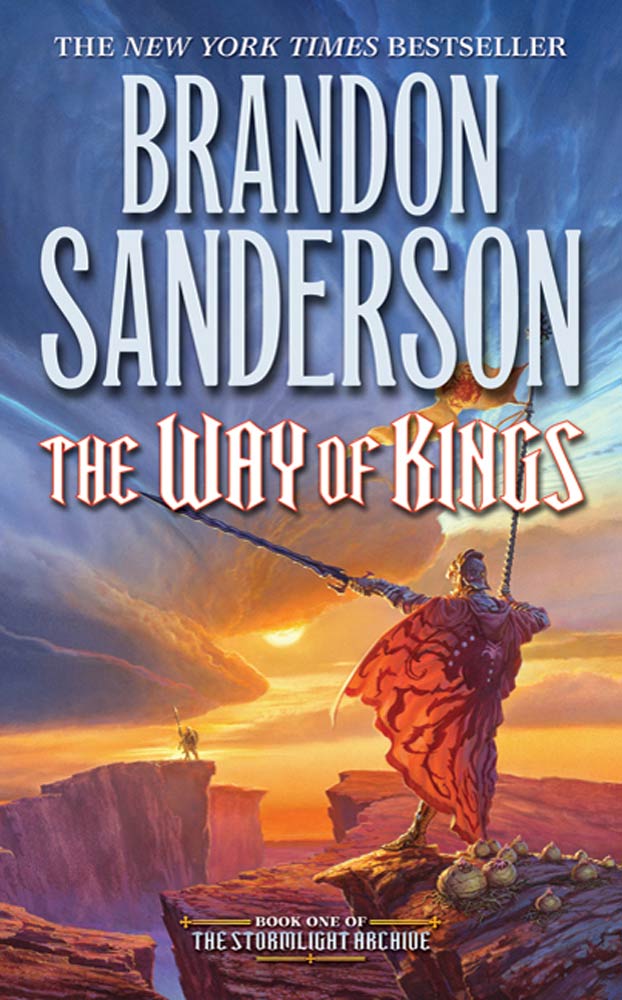 On March 4th, The Words of Radiance, the second book in Brandon Sanderson's epic The Stormlight Archive series, came out. So this month the review will be on the first book in the series.

The Way of Kings

The world of Roshar is a rocky and hostile place, with fierce highstorms sweeping over the land, and with plants that withdraw into the ground to protect themselves from the elements. We meet several people, from the Alethi nobility, to low slaves. The story centers around these characters: Kaladin, once a surgeon's son, now a slave and a bridgeman in the kings army; Shallan, a young noblewoman, who's looking for patronage with Jasnah, who is the king's sister and a world-famous scholar and heretic; Dalinar, the king's uncle, who is plagued by mysterious visions during highstorms, and his son Adolin, convinced his father is losing his sanity; and Szeth, a mysterious assassin.

Each book in The Stormlight Archives will center around one character and their back story, and this is Kaladin's book.

Some years ago, the current Alethi king was assassinated by Szeth, and a race of people called the Parshendi claimed responsibility. Since then, war has raged on the Shattered Plains. The king and all the highprinces live in permanent camps there.  This is where we first meet Kaladin, in a slave transport on it's way to the Plains. He ends up being sold to Highprince Sadeas as a bridgeman, the lowest of the low in the army. The Shattered Plains live up to its name; it consists of plateaus that can only be traversed with bridges, and bridgemen die in the dozens on every run. Kaladin starts to feel a responsibility for his crew, but the demons from his past haunt him. In addition, a mysterious spren has attached herself to him, and he starts to discover he has unknown powers.

Dalinar is a soldier, now forced to play political games as the uncle to the king. He is dissatisfied with the war and the Alethi way of thinking and competing. His brother, the last king, directed him to a book called The Way of Kings with his dying words, and Dalinar is starting to realize things about the past--about the Voidbringers--through the visions that he receives when he blacks out during highstorms. He wants to unite Alethkar, and end the war, but he does not have the political power to do so, yet.

Shallan has traveled far to meet with Jasnah Kholinar, a scholar and the sister of the king. Shallan's official story is that she is there to learn and study with Jasnah. In reality, she is there to steal Jasnah's Soulcaster, a powerful magical device, to save her family from economic ruin. But Shallan is a scholar at heart, and she soon finds herself torn between the responsibility for her family and her own desires. We also find out Kaladin isn't the only one who's starting to learn about having mystical powers. And what exactly is it Jasnah is researching about the Voidbringers?

It's a Brandon Sanderson book, so we know that the worldbuilding will be great. The world is complicated and confusing, yet makes all kinds of sense, and it feels real. The Alethi society is built up around the male arts and the female arts, and divided between lighteyes (the nobles) and darkeyes (the common people). It's very divided and the rules are strict, and it both engages and enrages you as a reader. The magic system is intriguing, logical, and very exciting. Although we don't understand everything yet, you are left with the feeling of craving to know more and more. The characters are well fleshed out, interesting, complicated, and their stories, although they seem unconnected at the beginning, slowly becomes intertwined. The interludes between parts of the book introduces other minor character in other places of the world, fleshing out the world even more. Worldbuilding truly is Brandon Sanderson's biggest strength, and here he does his best work to date.

It's a very long book, and it takes a little while to really knit together the stories. That is the only critique I can manage to find for it.

This book is amazing, and a must-read for any fantasy fan. Sanderson slowly unveils what will be his major saga. I will rank this up in my top three favorite book series ever, together with Wheel of Time and Patrick Rothfuss' Kingkiller Chronicles. I do not have enough praise for this book. I will simply use the words of Patrick Rothfuss to describe it: "I loved this book. What else is there to say?"

This book is available in Dragonmount's eBook store, here.  You can also pick up Words of Radiance here.