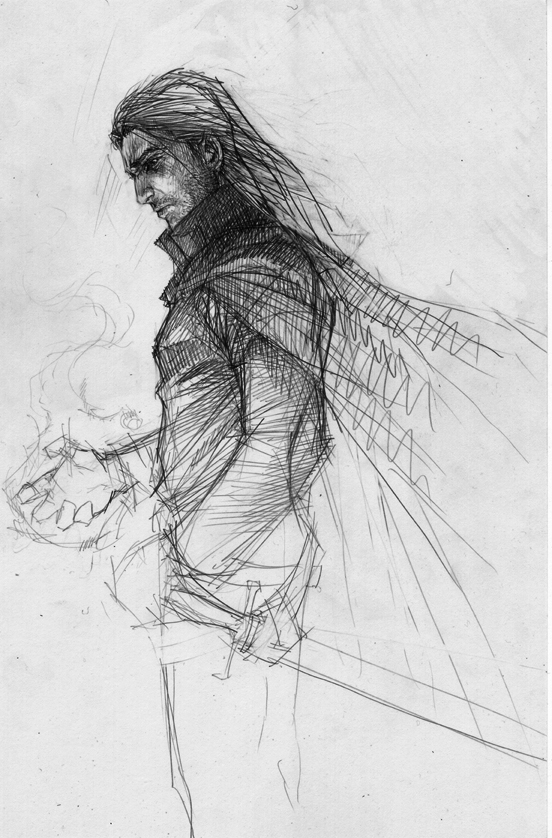 This week for Fan Art Friday, we're going to take a look at the Black Tower. The Asha'man uniform is a black, high collared coat. As they gain rank, they earn pins that can be worn on the collar. Don't ask whether the Dragon is on the right or the left, because that topic has completely derailed every discussion on men's costuming we've ever attempted at either Dragon*Con or JordanCon. Seriously.

But fannish arguments aside, let's take a look at some art:

A nice, generic Asha'man by Katerina Borovikov. Note that the Asha'man pin is silver in this piece, instead of the canonical gold and red enameled described in the books. That's something you see in Wheel of Time costuming as well, because the sterling silver version of the Dragon pin that Badali sells is far more affordable than the red and gold version. I love this one. It's pretty simple and to the point. "Asha'man! Explode stuff!" DeviantArt user liruchen describes this as "Saldeaen Asha'man", which explains the mustache. Pretty fabulous use of line and form on this one too. This one is a really nice study of an Asha'man. I think one of the reasons the Black Tower has become so popular in fandom isn't just that you get to dress in black and set fires with your mind, it's the sense of struggle the Asha'man have. To save the world, they have to embrace the part of themselves that's terrible and destructive. They risk madness to learn how to channel. It's a tremendous sacrifice they make. This piece by solitarium captures that feeling. Another juxtaposition you see frequently is Asha'man with sisters of the Red Ajah. The Reds as a whole get a bad reputation in the books. They come off as man haters, even though there are several Reds who enjoy men and one even openly wishes for a Warder. The Reds, however, are the first Aes Sedai to really understand what the Black Tower means and offer to bond them as Warders. This is without knowing that saidin has been cleansed or what might happen to a woman bonded to mad man. It's an incredible act of courage for them to say "Men who can channel are our responsibility" and take that so seriously.

Anyways, I'm editorializing and it has very little to do with this picture by gala-maia of Logain with one of the Reds he bonded against her will. I personally prefer the idea of the Reds and the Asha'man standing together against the Shadow, rather than one side victimizing the other.