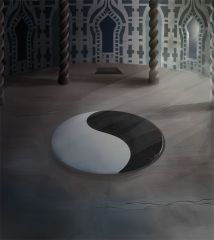 Sorry for not getting an article up for the last few weeks; I ran into a few problems. But now it's Friday again and I will continue on with the Architecture and Scenery feature. This week has artwork from some mysterious and secret places.

Rhuidean is a city shrouded in mystery. For centuries it remained under a dense fog. No man could go into Rhuidean more than once, and no woman more than twice. This was until the weaves over Rhuidean were destroyed in the fight between Rand and Asmodean.

The White Tower is the home of Aes Sedai. Aes Sedai are known for their mysteriousness and secrecy. The image is of the Hall of Sitters.

The last image is of Dragonmount. Dragonmount's peak and upper slopes are places where no one has gone and come out alive to tell of it.

The introductions done, the artworks are...

Hall of the Sitters by RShara

The slopes of Dragonmount by robchristianson