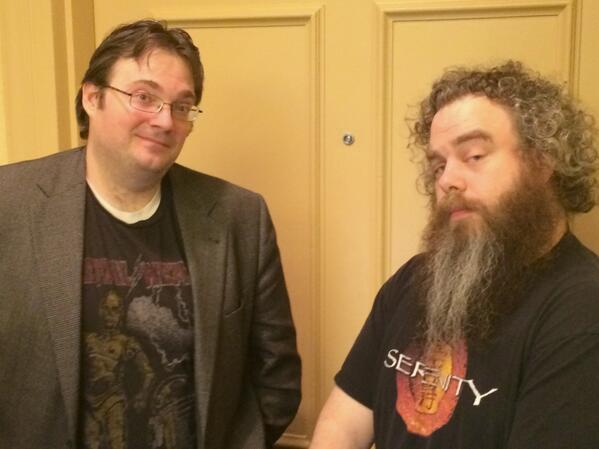 JordanCon 2014 has come and gone.  The three days of the convention were packed with so much excitement, it felt much longer.  Or perhaps it was staying up so late to spend just a few more minutes talking about Rand, Mat, and Perrin, that made it seem that way.  Either way, it's over.  But it's not the end, because there is always next year.

Sunday was a bit more laid back than Saturday.  Things were winding down, but there was still a ton of events.  Since I was eliminated on the very first question during last year's trivia contest, I decided I would try even harder this year.  For the "Daes Dae'mar" trivia contest, we were able to be in teams of up to five, and my team was filled with dread because of Terez's mighty knowledge.  Would you believe we nearly tied for first place?  In the end, due to the Tarmon Gai'don round, we wound up losing.  But still, second place is better than being the first one out.

Sunday was also the kaffeeklatsch with Brandon Sanderson.  We were lucky enough to get in to see him.  It was an amazing hour, just talking about anything and everything.  The winner of the costume contest--she had dressed up as Syl from Brandon's Stormlight Archive--was also in attendance and pondered on the nature of a Spren's bond with a human.  Interesting stuff, but I won't go into it here.  My questions tended to focus on The Wheel of Time--like if the very last scene seemed a bit too happy to fit in with the darkness of the rest of the book--and what Ajah Brandon would chose if he were an Aes Sedai--his answer was Blue, surprisingly.

Numerous people wore costumes, and most didn't even enter the costume contest.  This picture of Min was among my favorites costumes.  Though, a cosplaying Lews Therin and Ilyena--whom lay unmoving on the floor while he tired to feed her chips--was probably the funniest.

I completely missed the Blademaster Tournament, but have every intention of seeing it next year.  I'm not even sure who won, but it looked like everyone had a fun time.

Supposedly, during an earlier JordanCon, a cardboard cut out of Rand (the one from A Crown of Swords) disappeared in the night.  Well, by some miracle of the Light, he reappeared this year.  Everyone was pleased to see him, though he was taken to the safety of a locked hotel room during the night.  Here he is, punching my sister.

I honestly had more fun this year than last year.  And that means I'll have an even better time next year.  I cannot wait for JordanCon to come around again.  I want to thank everyone who helped with this event, including the honored Guests, the Directors, the volunteers, and the hotel staff.  Everything went smoothly, everyone was friendly, and the environment was so welcoming.  Wheel of Time fans are the best!

If you want to see more of my photo gallery, please click here.  And if you want to share your pictures, put a link below in the comments!