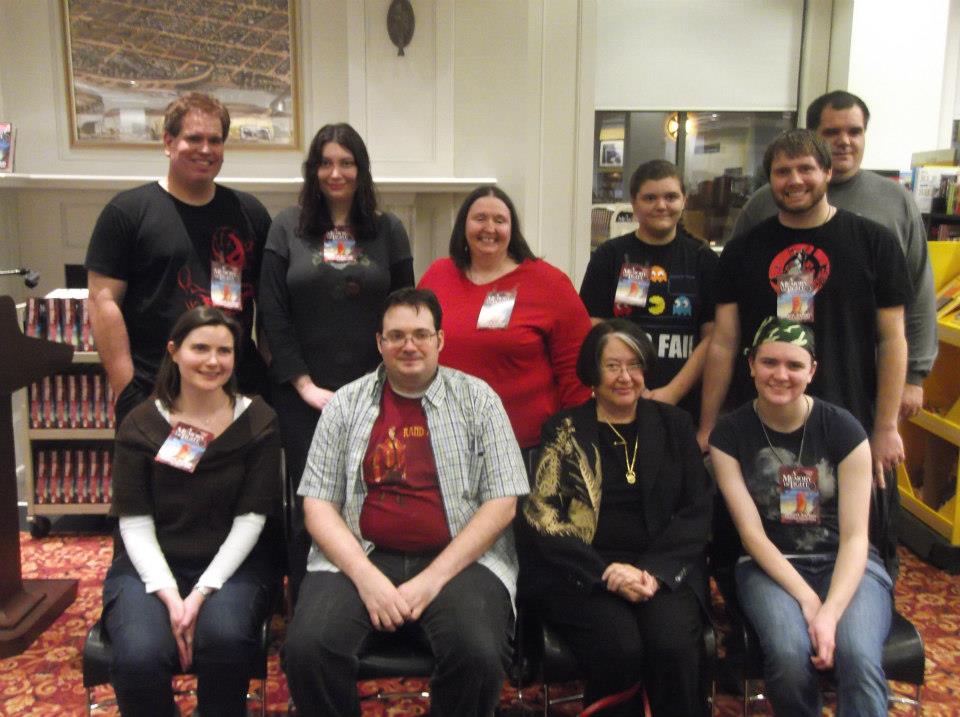 I was the “First Among Equals” at the Dayton signing. I was the second Memory Keeper to arrive at the store. We were shown to the back room where we could stash our stuff, and then the first problem arose. While all of the prizes had arrived, the box of the Memory Keeper t-shirts never had, though the latest communications had said they would be shipped with the prizes. As the other Memory Keepers arrived, it was decided that to distinguish ourselves from the other Wheel of Time fans, we would wear “badges” taped to our shirts or necklaces (which were all later signed by Harriet).

While this problem was solved, the line of other Wheel of Time fans waiting to have their books signed was growing longer. Three of us set about condensing the line by winding it through the rows of bookshelves, which worked pretty well. We would split the line, lead a “follow the leader” around a bookshelf, then lead them back to the rest of the line, then go to split at the next spot.

The final Memory Keepers arrived shortly before Brandon and Harriet were set, which was also around the time that line numbers were to be handed out. The Memory Keepers helped guide those who had gotten their line numbers to the place where the Q&A session was to take place. A few Memory Keepers went around handing out Mad Libs and “Autographs” to pass the time.

While that was going on, I was telling another Memory Keeper that we needed to watch out for Brandon and Harriet, and behold, they walked in the door. We showed them to our little hiding place, where a couple of the Memory Keepers helped them as they pre-signed some stock books. The rest of us helped with the prizes of the games (the “Bela is a Darkfriend” bumper stickers were gone almost instantly). Towards the end of this time, we rotated in to have our time with Brandon and Harriet to ask a couple of questions and get our books signed.

Then the big moment arrived: it was time for the Q&A! The Memory Keepers kept to the back, while Brandon directed which sections he’d take questions from when, and repeated the questions back for all of us to hear. I don’t specifically remember many of the questions, but I certainly learned a lot about Brandon, Harriet, and the Wheel of Time project as a whole.

At the end of this time, Harriet read the first two paragraphs of the first chapter of A Memory of Light (

), and Brandon explained how the book signing process was to go. For the first round, he and Harriet would simply sign all of the books and get pictures taken if requested.. If someone wanted it personalized, they could wait until everyone had been through the line, and then we’d go through the numbers again. This system ended up working VERY well.

Then, the store supervisor in charge of this event auctioned off the A Memory of Light poster that they had put on display. It sold for over $200, and the money went towards a local program which taught reading to at-risk children and adults who also needed help reading.

About half of the Memory Keepers helped out with the signing process, making sure the flaps were in the right place, helping out with keeping the right books with the right people, giving the books back, and calling out the numbers.

The rest were leading games in a different area of the store. For a short time, we had three different trivia games going, but eventually those combined into one and a hangman game started. We had other games planned, but those two lasted us through the night. There were new people that came around for trivia after the first group had ended, and so we got to “recycle” questions. The hangman was also fun--especially when the phrase was in Old Tongue. I enjoyed floating through these games as I dashed about.

One of the trivia games:

There were nearly three hundred people at this event, and though the Q&A had started at 7:00, we were able to make it through the first round of numbers around 10:00. We said our goodbyes to Harriet, and after a few more autographs and pictures, she departed for the hotel.

I had to leave partway through the second round, but it seemed like it would be done well before midnight--perhaps even by 11:00.

I am very proud of the Memory Keepers that volunteered at this event. Each of them did their part and contributed many ideas and smiles to the night, helping it be a success. I doubt any of us will forget it any time soon.