Brandon Sanderson interview with The Dusty Wheel, plus prank scene

The Dusty Wheel YouTube channel hosted an interview with Brandon Sanderson where they discussed the Wheel of Time and revealed a "prank" scene from Towers of Midnight. 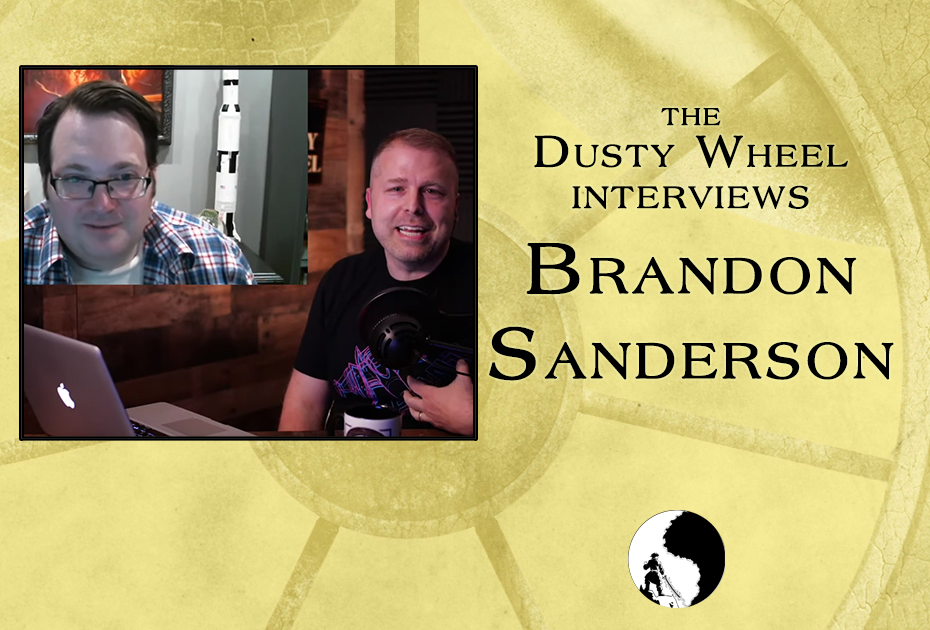 The Dusty Wheel YouTube channel hosted an interview with Brandon Sanderson tonight. They talked about the Wheel of Time books and the upcoming Amazon Prime TV show. Some WoT-related highlights of the program included:

The full, 90+ minute interview can be found here:

10 years ago, Brandon asked a select group of fans to read early drafts of Towers of Midnight, the thirteenth and penultimate book in the series. Today, he revealed a special scene from that book that he wrote exclusively for one of those fans, Matt Hatch.  Matt is the founder of Theoryland.com, a WoT website known for its obsessive passionate attention to details. If there's ever been a "looney" theory made about the books, chances are that it's been discussed in extreme details on that forum.  Today, in addition to maintaining Theoryland, Matt is now the Innkeeper of the Dusty Wheel. Because today is April 1st (April Fool's Day), Brandon received permission from Harriet to share the scene he wrote for Matt. The scene is only ~250  words long, and takes place during Chapter 57: A Rabbit for Supper.

Here's the scene, in its complete form. (The italicized text is from the actual book, and is included to provide context for the scene.)

He must have made a face at the thought, for Thom chuckled and Moiraine smiled again.  The two of them soon lost interest in sporting with Mat, however, and turned to a soft discussion.  That affection in their eyes was true.  They did love each other.  Light!  How had Mat missed it?  He felt like a man who had brought a hog to a horse race.
He turned to make himself scarce and leave the two alone, but he froze.
That was no dear in the bushes.  It was too tall, too wide.  Moiraine gasped suddenly.  “Channeling,” she said, leaping to her feet as a bar of something white and brilliant cut through the air toward the camp.
Mat cursed, rolling out of the way.  It narrowly missed him.  An older woman burst from the bushes.  She had gray hair set with little ornaments, and she had the ageless face of an Aes Sedai.
“You!” Moiraine said.  “Cadsuane!"
Cadsuane cackled, letting loose another bar of Balefire, but an unexpected knife thrown by Thom startled her, and she missed Moiraine narrowly.
“She must be one of the Forsaken!” Mat cried from beside a log where he’d thrown himself.
“Forsaken?” Cadsuane exclaimed.  “I’m the Dark One!”
“Not for long,” Moiraine said, causually waving her hand in the air.  A Gateway split the air right in the middle of Cadsuane, chopping her in half.  Instead of blood, a dark, tar-like substance--stuck with beetles and dead flies--splurted out onto the ground.
“That was a tad easier than I thought it would be,” Thom noted.
“Yes,” Moiraine said, settling herself beside the fire.  “But I’m certain it had Matt going for a moment or two.”
“Me?” Mat asked.
“No,” she said.  “The other Matt.  We should continue what we were doing.”
Mat scratched his head, but shrugged and continued on his way.
He went to scout the area where their gateway was supposed appear.  It had better.  They had no supplies, and Mat did not fancy flagging down a ship and riding the long way back to Caemlyn.

It's unlikely that any other fan had a scene written exclusively for them, even it was intended as a joke and obviously not included in the final book.

Michael Kramer, one of the audiobook narrators for the series, made a recording of this scene that you can listen to here.

Be sure to check out the video from The Dusty Wheel on YouTube, and subscribe to their channel.