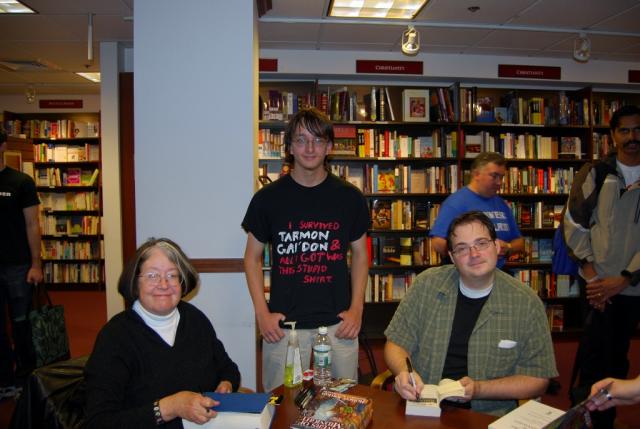 How can I describe a dream come true? With this report,I'll give it my best try. My day started with my son waking me up saying..It's today! Yes, I admit it,even my eight year old knew how special a day this particular Sunday was going to be for me.

After going to church and offering prayers for the success of the whole Tour with special Trisagion Prayers of Mercy being said for the repose of the Soul of our beloved Departed Creator "Robert Jordan" and for the continued health of Harriet. I drove to Cambridge loaded with books, instructions and questions.

I also had all the the Tower Guard T-shirts. Since the Tower Guards and I did not get to meet prior to the Book Signing, I wouldn't wear my t-shirt until each of the other Tower Guard's had theirs. I wanted so badly to show it off, but felt honor bound not to..so I waited.

All the Tower Guards met at the Harvard Coop where there were lovely displays of the whole of the Wheel of Time Series as well as all of Brandon's books. I was pleased to see that Karen Porter from the bookstore was able to have all the books in time because last year I was unable to obtain even one full set of Brandon's books. This year, they were well stocked.

If one were to guess the amount of people planning to attend the book signing from the facebook page, they would have been surprised. I think we had over fifty people waiting in line at the time the Tower Guards arrived, and we arrived at least

three hours prior to the Signing. We got ourselves set up and Dennis got started right away asking people questions from his specially prepared list. I will include the questions at the end of this report. I must say that the people who "WON" the prizes deserved them. These were no easy questions. In the meantime, I had my cell phone on and was patiently waiting for a call from Brandon and Harriet's driver's to tell us they arrived, when all of a sudden, in walks Brandon. It was like, HE's here..OMG...he's here.

One of the fan's went up and introduced himself to Brandon, reminding him that they met before and Brandon being the gentleman that he is, started to get involved in the conversation. We,. the Tower Guards being jealous of our personal time with Brandon and feeling it dwindle away, rushed him off to the fourth floor where the Coop kindly brought up a light lunch for us all. One of the Guards met with Harriet and we all sat down for our books to be signed, receive special instructions and ask questions.

We're not allowed to "discuss" spoilers but suffice it to say that most of our questions were met with "RAFO". I needed to be told what RAFO stood for. (Read and Found Out). Brandon told us that this was one of +Robert Jordan's favorite answers. I can see why. After our time for which I and I'm certain the other Tower Guards are forever grateful for, we went to the book signing area where it seemed that the amount of people tripled. The first thing evident other than the size of the crowd was the diversity of the crowd. We had people from all over the world, Brazil, Portugal, India, China, Korea, Japan, Israel and Lebanon. Children, infant's and parents all were together to show support and love for the Wheel of Time Series and for their new favorite author.

I met many people there who actually found out about the Wheel of Time because of Brandon's Sanderson's books and vice versa. While listening to many of the conversations the majority of people echoed the grateful feelings that Brandon is the one finishing the Series and that he is doing a "bang up job" of it. (bang up job-not being my words). I don't remember her name, sorry, but when I was asked by a young lady who the woman was sitting next to Brandon and I told her that it was Harriet, +Robert Jordan's widow, she was in awe almost to the point of tears.

Brandon was introduced by Richard, a member of the Harvard Coop who was incredible. He compared the Wheel of Time with Mahabaharat both in size and complexity and really "blew it out the of the ballpark"! Brandon said a few words and made his plea for everyone to patronize the book store and thanked the Harvard Coop for hosting us. He then introduced Harriet who read from my book! Squee!! Brandon had chosen to read from my book last year and HE mentioned that Harriet should read from my book this year so I would have a set. Isn't he Super Fantastic??!! Silly question I know.

Harriet read the Prologue and the few dry eyes that were in the crowd were probably hiding their tears well. I hope that my Tower Guard who had to step away for a moment doesn't get angry at me for writing this. What passion! What a Blessing to have had Harriet with us!

After the Reading, which I do have on video and will post here, the actual signing took place. On a sidenote, my Red Sister, Kaths made me a shawl so that I could have it in time for the signing, and Harriet LOVED it. Kaths, you did good! I draped the shawl over the chair that Harriet or Brandon were going to sit in and there it stayed!

Venkat and Andrea, who is the Mistress of Novices at theoryland.net, immediately started taking pictures, Bob and Dennis organized the people and started asking questions, I was standing there to make sure that everything was going well and if Brandon or Harriet needed anything, I was there to get it . The line went quickly with many surprise gifts for Brandon, Peter, his assistant, and Harriet.

half an hour of quality time with the small group that remained. There were many people that made great impressions on us. The Wolf Brother was one, Kalyani, who made special t-shirts for Brandon and Harriet and a special one for Peter, because he answers all her questions. Kalyana was promised to be a Trooper/Guard next year and it struck a chord because the first thing out of her mouth was,

"I hope I am in the US next year." I will go anywhere." It's fair to say that all who heard her heartfelt wish also want her to be in the US for the next Signing. Kalyani, I hope to see you next year!

The little babies who were at the signing were a treasure but the young 13 year old who asked Brendan a question to which he was answered.."RAFO" was adorable. Okay,so I'm showing my age..but he was. Last but not least was the Pi Lanningham. who insisted that he be the "last" in line. Check out his t-shirt. I want one of those!

After everyone had their books signed, extra books signed for the Coop, we presented Harriet and Brandon with our gifts to them. We got "Dark Magic Cards" for Brandon and a Harvard Sweatshirt for him and for Harriet. My trooper decided to get some small gifts for Brandon's children because as he said, parents love to buy gifts for their children and it didn't look like Brandon would have any time to do much shopping. I agree, great job!

Some things you may or may have not known.

Harriet graduated from Harvard University. She had a hand in editing "The Way of Kings. and drum roll please, Brandon let it slip that there will be one more opportunity to make a donation and

have the chance to have your name be in the Final book of the series!!!!!!

After the signing a small group of us,not wanting to end this magical day went to Grendel's Den and had dinner. Thank you Alric, it was a perfect place to talk, eat, have a drink and re-hash the events of the day.

I would like to end this report by mentioning the dedication of the Towers of Midnight. What a tribute!

I offer my sincere Thanks to Brandon, Harriet and all of you who work behind the scenes. This was a great signing because of all your hard work and dedication and the Troopers and I thank you so much for this opportunity.

May your Memory Be Eternal Creator!

respectfully submitted on behalf of the Boston Tower Guards

Sister of the Red Ajah