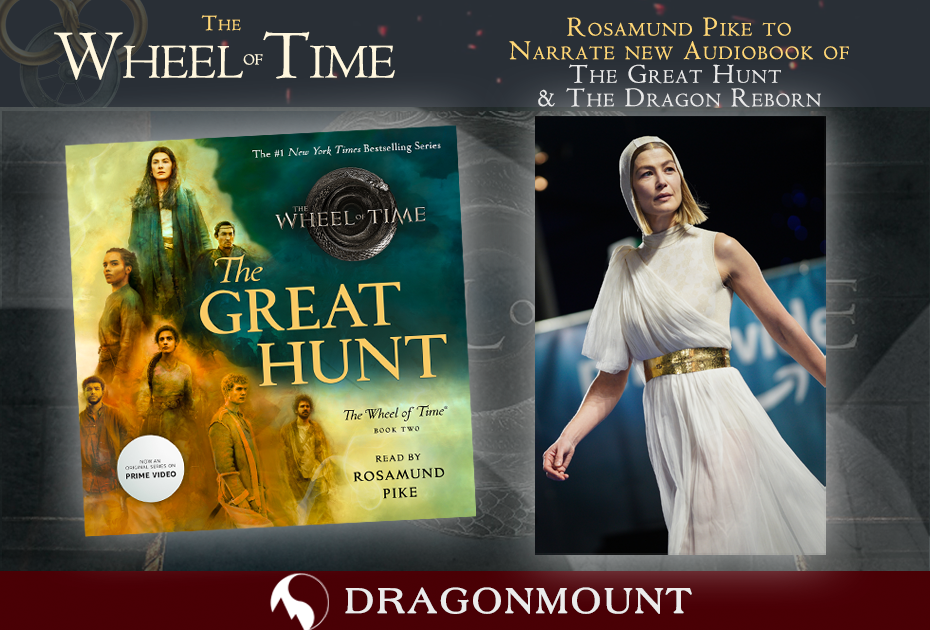 The most well-known of versions of these audiobooks were recorded by the real-life husband and wife duo of Michael Kramer and Kate Reading. Prior to them, during the early 1990's, actor Mark Rolstrom recorded both abridged and unabridged versions.

Long-time fans can be rest assured that the older versions of both audiobooks from Michael Kramer and Kate Reading will remain available along with these new versions from Rosamund Pike.

It is unknown whether Rosamund Pike will narrate all books in The Wheel of Time series. For now it seems as though she is keeping pace with the story adaptation presented by Prime Video's series.  Season 2 of The Wheel of Time is expected to adapt many of the events in these two novels.

July 25, 2022 New York, NY — Macmillan Audio has announced that Oscar & BAFTA-nominated, and Emmy and Golden Globe-winning actress Rosamund Pike will now narrate new audiobook versions of Robert Jordan’s The Great Hunt and The Dragon Reborn. These audiobooks will follow the November 2021 version of The Eye of the World narrated by Pike. Pike has also narrated blockbuster audiobooks such as A Slow Fire Burning by Paula Hawkins, Sense and Sensibility by Jane Austen, The Spy Who Loved Me by Ian Fleming and Restless by William Boyd.

“It is such an honour to go back into the series and record these next two books,” remarks Pike, “The deeper I dive into the world of the Wheel of Time, the more I love it. Anyone discovering these books for the first time has a treat in store... there is so much passion and detail in every character. I love the narration process and am in awe of this man’s imagination!”

The new audiobook editions are published in connection with the Prime Video series The Wheel of Time. Pike stars as Moiraine Damodred in the show, which concluded its first season on December 24, 2021. Macmillan Audio's editions of The Great Hunt and The Dragon Reborn narrated by Michael Kramer and Kate Reading will continue to be available.

The new audiobooks will be for sale on Audible, Apple Books, Libro.FM, Google Play Books, Audiobooks.com and more, and are available for preorder now.

Macmillan Audio was founded in 1987 as Audio Renaissance and published its first programs in 1988. Audio Renaissance was acquired by Holtzbrinck in 2001 and changed its name to Macmillan Audio in 2007. Macmillan Audio records the best fiction and nonfiction available for both adults and children from Macmillan’s publishers, in addition to publishing original productions and titles from other publishers. The company’s line of products also includes the language-learning series Behind the Wheel. Macmillan Audio narrators include Meryl Streep, Ben Miles, Lorelei King, Stanley Tucci, Simon Vance, Gwyneth Paltrow, Holter Graham, and Cynthia Nixon, as well as President Jimmy Carter, Billy Crystal, and Rob Lowe, who have read their own audiobooks. Macmillan Audio productions have been nominated for six Grammy Awards and have won numerous Audie Awards and Earphones Awards. Macmillan audio titles are available digitally as well as on CD.

Rosamund Pike is an international stage and screen actress, who is widely known for her work as Amy Dunne in David Fincher’s Gone Girl, for which she received an Academy Award nomination. She also received a Golden Globe nomination for her performance as Marie Colvin in A Private War and won an Emmy for the short form series State of the Union. She was most recently seen playing the iconic Moiraine Damodred in Amazon Studios’ adaptation of Robert Jordan’s Wheel of Time series. Last year, Rosamund won a Best Actress Golden Globe Award for her performance in the dark comedy I Care A Lot . Other notable roles have included Jane in Joe Wright’s Pride and Prejudice, Rosalee Quaid in Scott Cooper’s Hostiles and Marie Curie in Marjane’s Satrapi’s Radioactive. Rosamund Pike is represented by United Agents (UK), CAA (USA) and Magnolia Entertainment (USA).

The new audiobook can be pre-ordered here on Audible. It's also available on Libro.FM, Apple Books, Google Play Books, and more.

Tell us what you think in the comments, and be sure to join us on our forums and on social media.