Review of “The Dark Along the Ways”

Katy gives a full-spoiler review of Amazon Prime Video's The Wheel of Time television series, Season 1, Episode 7, “The Dark Along the Ways.” 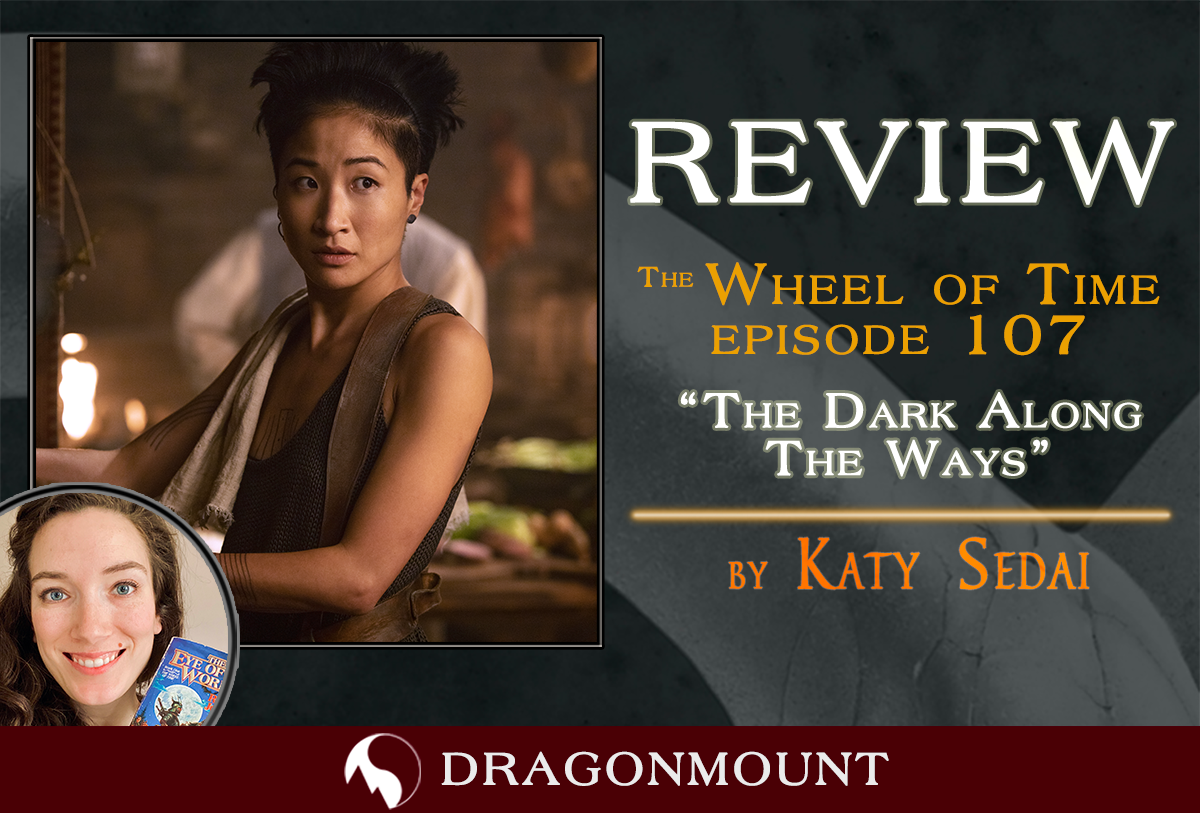 The penultimate episode of The Wheel of Time television series, The Dark Along the Ways, begins with a cold open that pushes the previous episodes aside. Snow and Blood - a fight scene unlike any we’ve seen so far this season - a lone Aiel Maiden of the Spear, in labor, fighting off soldier after soldier.

Episode seven is the first episode made after the “Covid break” in production due to the global pandemic. And rather than diminish the quality of the TV show, if anything, the break amplifies the show, raising production quality, the story, and the acting.

This first scene exemplifies the improvement. The directing from Ciaran Donnelly is amazing, and I hope to see more fight scenes in this style in the future from the show. Stuntwoman Magdalena Sittova, who plays Tigraine Mantear, was incredible, her athleticism shone and the relief on her character's face when Tam reaches out to help her birth her baby absolutely broke my heart. Many fans will be happy to see such an epic depiction of the blood snow since it’s such an iconic scene from the books.

After the cliffhanger with a sword to Tigraine’s throat, we move back to our main storyline and the Ways. This was another iconic space that many book fans were looking forward to. As part of the time gap due to the pandemic, they also had time for rewrites. Barney Harris’ Mat Cauthon doesn’t appear in this episode at all, so it does seem we won’t see Mat until season two when Dónal Finn will reprise the role of Mat. It’s a disappointment they had to write Mat out of the story, but the break gave the writers time to edit. “We didn’t leave him, he left us” says Egwene about Mat, but I wonder if that also applies to Barney.

The Ways sequence felt fairly short, and the addition of ramps might have added to the 3D space they occupy. The show introduces a new interpretation of Machin Shin. One that literally speaks to your deepest fears and insecurities. The repercussions of Machin Shin’s whispers were felt throughout this episode. Making the Black Wind personal rather than generically creepy and blood thirsty was a great change, and just another way the book material can be improved moving to a new medium. The added peril of Machin Shin gave the group a reason to go to the borderland city of Fal Dara and not straight to the Eye.

Our team of weary adventurers then arrive in the fortress city of Fal Dara where we meet some beloved book characters, including Lord Agelmar (played by Thomas Chaanhing), and fan favorite, Uno Nomesta (played by the Guy Roberts, the wonderful flaming bastard). One change I’m uncertain about is the animosity between Moiraine and Lord Angelmar. But like most changes, the conflict needs a bit of time to develop and see where it goes. It’s hard to judge changes on just one scene.

The sets of Fal Dara are rich and detailed. You can clearly see that the style is different from Tar Valon. This is the look at a new country, and down to the designs in the windows, there’s a new style and geometric angularity. Fal Dara looks like a real fortress city.

Moiraine next takes her band of Two-Rivers folks to see Min Farshaw, Seer and bartender, hoping to determine if any of them are the Dragon. Min has visions for all five of them: Perrin with goldeneyes and blood down his chin, Rand rocking a dark haired baby, a white flame and golden ring for Egwene and Nynaeve, and finally, The Amyrlin Seat in full regalia that will be Moiraine’s downfall. In the books Min’s visions are glimpses of the future that foreshadow certain events, but not always in the way you’d think. It seems the TV show is going for the same feeling here. Book readers may think we know what these all mean, but is what we see really the way it will play out? Kae Alexander plays Min a little tougher, a little more world-weary than the Min in the books. It seems like Min has a job and is running a successful bar. It will make her future decisions hold more weight since she has independence and a life here in Fal Dara. It was never clear to me what exactly she was doing in the Inn in Baerlon. She felt too vulnerable to being swept up in the Ta’verens’ wake. Now perhaps she will have to make a more conscious decision to leave her life.

Let’s now talk about maybe my least favorite part of the story yet. The Perrin-Egwene-Rand love triangle. This bit felt lazy and unnecessary. There’s a need for conflict among the Two-Rivers folks, but this really felt contrived for TV, and I honestly hate it. There’s enough love triangles in the future that we don’t really need Perrin getting involved here. A bit of this may be leftover effects from the Black Wind, but I still don’t like it.

Romance I do like - Lan and Nynaeve!! There was a part of me that was hoping for some of the lines we see at the end of The Eye of the World. But the scene of them having dinner with Lan’s friends was lovely. The TV show is actually developing this romance, rather than just randomly having them declare their love (ahem, EOTW). The show has really outlined what draws these two characters together: their dedication to the people they love, their protectiveness, and their drive for others. The relationship is very believable and real.

As a book reader, I was hoping to see the romantic relationships improved in the show. Many of the relationships happen in the books with little to no warning, and people fall in love at first sight. Robert Jordan does a good job developing believable platonic relationships, but his romances generally fall short. It’s nice to see the show take the nuggets from the books and expand them into full fledged relationships.

The show is also doing this with Egwene and Rand’s relationship. They are coming to the same conclusions they do in the books, that they likely can’t be together the way they want. But they actually talk to each other. There’s little lines of dialog that makes it feel real - Rand saying to Egwene that he knows she’ll come to him when she’s ready to talk. Which is exactly what she did. They really do know each other and have an established relationship. Thankfully they also shut down the Perrin love triangle pretty fast.

About this point I was starting to get worried about the pacing of the episode. It felt almost too much like the previous one, where the characters were gearing up to go on a journey, this time through the Blight instead of through the Ways. I was hoping for an epic battle since it’s been a couple episodes since we’ve had anything like that.

Instead, we finally have our big emotional reveal - Rand is the Dragon Reborn, and he cannot let his friends go to the Eye of the World to their deaths when he can prevent it. Rand is not happy to be the Dragon Reborn, to be a channeler. It’s so true to Rand’s character that he faces his deepest fear to protect his friends.

The audience finally gets Rand’s points of view from the few times he channels. We get a fantastic scene with Rand and Min sharing a drink, and see the rest of the Blood Snow play out. They include a small change when Tam helps the Tigraine give birth, and he gives her that little bit of comfort in such a dramatic and traumatic moment. Michael McElhatton’s de-aging wasn’t my favorite make-up look. But other than that, this scene hit all the right emotional buttons.

Josha Stradowski has done a phenomenal job as Rand. His acting has pulled in both the sheepherder innocence and the terror at being the Dragon Reborn. In his emotional journey from Min’s bar, to firing the arrows, to Moiraine’s door, you can see his resolution to do what needs to be done. Rand al’Thor through and through.

This episode really hit a lot of the marks for me, and it might even replace episode 4 as my favorite episode of the series. The pause in production actually created a better quality show, from VFX, to the acting performances, to the sets. This episode was just epic!

There’s just one episode left of the first season of The Wheel of Time. The past month has been such a fun experience as a Wheel of Time fan. We’ve gotten a chance to see the world of the Wheel of Time expand in new and exciting ways. There are now visuals plus the incredible music from Lorne Balfe that adds context and depth to the story we love.

I’m sorry this season will come to an end so soon, but I can’t wait to see the conclusion next week!

What did you think of this week’s episode? Let us know in our forums or in the comments below.