Adam's Wheel of Television: Who Are the New Cast Members Playing?

Five new faces, four roles unconfirmed. Who could they be playing? 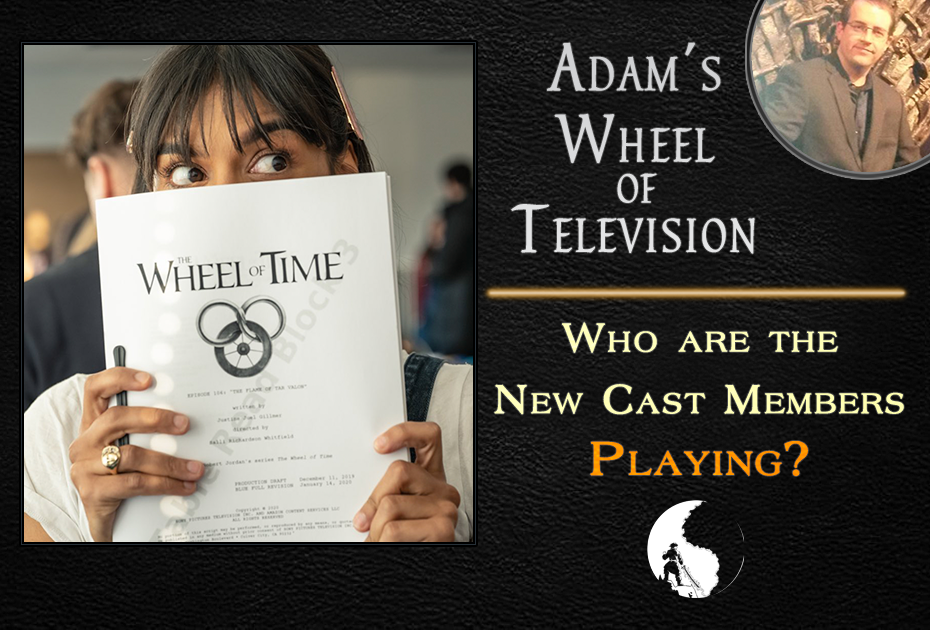 We have some new Wheel of Time cast members! And, as is becoming par for the course with this project, we don’t know who they’re playing!

Maria Doyle Kennedy, Katy Fleetwood, Jennifer Cheon Garcia, Daryl McCormack and Peter Franzén have all been announced as joining the cast through a social media blitz of them posing with pictures of their scripts for the Episode 5/6 table read. Of the group, only one confirmed her role: Katy Fleetwood will be playing Liandrin, an Aes Sedai of the Red Ajah who plays a major role in the second novel in the series, The Great Hunt. Jennifer Garcia also added the hashtag “#aessedai” and a blue square to her post, suggesting that she will be playing a member of the Blue Ajah.

The rest of the actors have not disclosed their roles, so it may be fun to speculate on whom they might be playing.

The big coup of the announcements is Maria Doyle Kennedy. A veteran Irish singer and actress, Kennedy is probably best-known for playing Catherine of Aragon on Showtime’s The Tudors and Mrs. S. on Orphan Black. She’s also had recurring roles on Dexter and Outlander. As arguably the highest-profile casting since Rosamund Pike, she’ll presumably be playing a relatively major role. She’s actually been my personal favourite fancast for about a decade for the role of Elaida do Avriny a’Roihan, Aes Sedai of the Red Ajah and Court Advisor to Queen Morgase of Andor. Kennedy has mostly played positive characters, so seeing her as a villain would be an interesting change of pace.

An alternative is Siuan Sanche, the Amyrlin Seat, the leader of the Aes Sedai. Again, Kennedy would be excellent in this role but I think it would be a shame if they lost the idea of Siuan and Moiraine as contemporaries. Kennedy is fifteen years older than Rosamund Pike, but it’s possible they may be considering a change so it’s more of a mentor relationship, which could work.

The final possibility to my mind is Verin Mathwin, Aes Sedai of the Brown Ajah and a font of information about the world. I think this is somewhat less likely due to the fact that Verin’s importance in the series tends to ebb and flow and she’d likely vanish for long periods of the story, which would risk losing Kennedy from the series in later seasons (although again this could be changed). Siuan and Elaida remain fairly important throughout the duration of the series and would be meatier roles for Kennedy, although there’s no arguing she’d play the hell of the culmination of Verin’s arc in The Gathering Storm.

Jennifer Garcia has done a lot of work in the Arrowverse for The CW and has also appeared in Fringe, Lucifer and The 100. Assuming she’s playing an Aes Sedai of the Blue Ajah, there are several strong possibilities. The most obvious is, if Maria Kennedy is not playing her, Siuan Sanche. Garcia is much closer to Rosamund Pike’s age which works for them being contemporaries. Other alternatives would be Leane Sharif, Siuan’s second-in-command as Keeper of the Chronicles; Anaiya Carel, a senior Blue Ajah sister (and the rumoured secret leader of the Blue Ajah); or Sheriam Bayanar, the Mistress of Novices.

Daryl McCormack is an up-and-coming Irish actor who recently starred in the fifth season of Peaky Blinders. His other credits include Vikings and Fair City. McCormack’s casting was actually leaked several months ago, suggesting that he may actually be appearing in the series before the fifth or sixth episode and they just chose to announce him at this point. His potential roles are fairly numerous but could include Galadedrid Damodred, the adopted eldest son of Queen Morgase of Andor; Aram of the Tinkers (given credence by reports that the Tinker wagon scenes have already been filmed); Dain Bornhald of the Children of the Light; or one of the Aes Sedai Warders for the previously announced actresses (Verin’s Tomas has the most story material, but Anaiya’s Setagana or Siuan’s Alric are other possibilities). Another possibility is that they’ve decided to cast unusually young for the roles of Elyas Machera (McCormack’s piercing eyes would be useful in this role), Lord Ingtar Shinowa of Shienar; or Captain Bayle Domon.

Peter Franzén is a Finnish actor best-known for his long-running role as King Harald Finehair on Vikings. There are quite a few possibilities for him, including the aforementioned Elyas Machera, Lord Ingtar Shinowa or Captain Bayle Domon. A fan-favourite suggestion seems to be Lord Gareth Bryne, the Captain-General of the armies of Andor. Lord Geofram Bornhald of the Children of the Light is another solid possibility. Raen of the Tinkers is another, although given that Franzén is much closer in age to McCormack (if he’s picked for Aram), they could change the relationship to father and son rather than grandfather. Mordeth could be another possibility, since we know the production is visiting Shadar Logoth. Lord Agelmar Jagad of Shienar is also a reasonable possibility.

For both McCormack and Franzén there is also the possibility of one of the Forsaken: Ba’alzamon, Aginor and Balthamel are all potential candidates.

Of course, guessing is difficult when we don’t know how many episodes there are in the first season (there are unconfirmed reports of eight, but Amazon have not yet confirmed) and how many books will be tackled per season, which is something we can speculate about another time.

As usual, we’ll bring you further news as it appears.