Adam's Wheel of Television: News from the Pattern

A flurry of news and rumours have swept Wheel of Time TV-land in the last few weeks, and it’s probably a good idea to take a look at the situation and see what’s what. 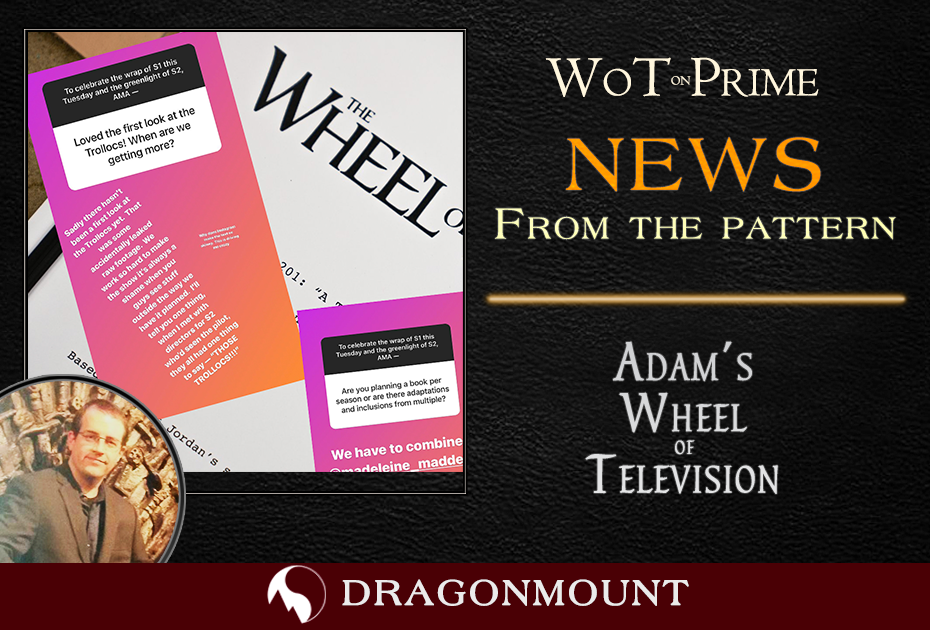 News from the Pattern

A flurry of news and rumours have swept Wheel of Time TV-land in the last few weeks, and it’s probably a good idea to take a look at the situation and see what’s what.

Season 1 is a wrap! (probably)

WoTSeries, who’ve been keeping their finger on the pulse of the latest developments, reported last week that behind-the-scenes crew were celebrating wrapping on the first season. They later clarified that a few more pick-ups needed to be done, but for all intents and purposes work on the first season has been completed. Rafe Judkins, Wheel of Time showrunner and unstoppable Narg-teaser, also confirmed this news in an Instagram Q&A yesterday.

No time for a rest though, as per our report work on Season 2 is due to begin almost immediately, with production rolling into the second year after a break for a couple of weeks for set building and table-reads.

Orbit Books, who publish the Wheel of Time novels in the UK and Commonwealth, have listed a new, TV tie-in edition of The Eye of the World for publication on 4 November. Tie-in editions of novels are typically published between a week and a month before the show or movie debuts. WoTSeries, doing a lot of hard work, have reported 26 November – Black Ajah Friday? – as one of the dates currently being batted around at Amazon. Assuming Amazon replicates their recent release schedule from shows like The Boys, that would put maybe three episodes out on 26 November and then one a week for five weeks afterwards, ending on New Year’s Eve. I wouldn’t mark that on calendars as confirmed just yet, but it’s a good sign that Amazon are at least envisaging a launch date this side of Christmas.

Tor Books, who publish the novels in the United States, have not yet confirmed their own plans for a TV tie-in edition.

An unconfirmed report (from a NSFW site we won’t be linking here) has Amazon casting for a “young actress to play a princess and future queen,” with reportedly the maximum number of legally-allowed years being asked for (six). That suggests that Amazon are looking for their Elayne Trakand (whose casting for Season 1 has not been confirmed) and that they also envisage the show lasting for (at least) seven seasons in total. Both of these facts are only conjectural; if Amazon wanted to be smart and had sneakily cast Elayne for Season 1 without announcing it, they might be casting for a different role. If you really stretch the definition, this could also be casting for Faile if they want to introduce her early, or Berelain, or even Tuon if they envisage major changes to the Seanchan storyline. Asking for six years might also simply be Amazon covering their bases for future renewals; if the show comes out and bombs, then we won’t be getting a third season, let alone a seventh.

Ondrej Nekvasil, the production designer for The Wheel of Time, was interviewed by a Czech periodical (translation courtesy of WoTSeries) and confirmed that the show will reflect the 16th/17th Century cultural setting of novels, rather just a generic medieval fantasy design. More intriguingly, he indicated Season 2 will shoot in Morocco, where productions such as Kingdom of Heaven and Game of Thrones have filmed in the past. The dry, dusty locations that Morocco provides relatively cheaply and within easy travel of Europe makes the Aiel Waste a likely candidate for the location, but I would not expect them to reach The Shadow Rising so early in the series. It’s possible we will instead be seeing flashbacks of some kind to the Waste, or perhaps from Seanchan characters to a dry and dusty part of their home continent. It may also be that part of the main continent has been re-envisaged as a more desert-like biome, or that it might be standing in for the Great Blight, or one the worlds reached by Portal Stone. Time will tell on this one. 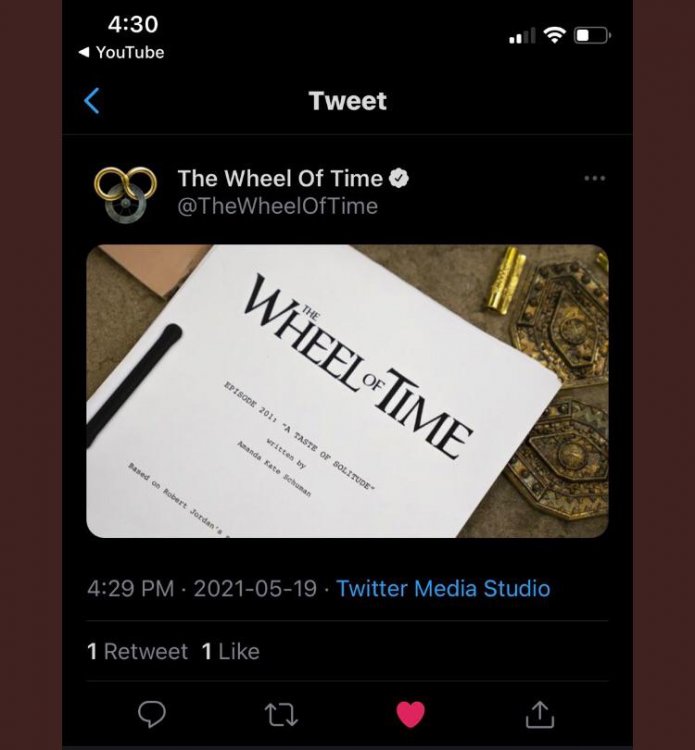 We have our first episode title for Season 2. The first episode will be called A Taste of Solitude and will be written by Amanda Kate Shuman. The title comes from a chapter in Lord of Chaos, indicating that Amazon will be drawing on the entire book series for ideas for episode titles, and the episode titles will not automatically correspond with the events of the chapter of the same name (unless Season 1 is way more compressed than we first thought).

Interestingly, we still don’t have confirmation of the titles for the final two episodes of Season 1 yet, something we’re endeavouring to find out as soon as possible.

Q&A with the Showrunner

Wheel of Time showrunner Rafe Judkins hit up Instagram on Thursday 20 May for an impromptu Q&A. It’s worth reading the full session in his Instagram stories, but the pertinent highlights follow:

It’s not dumping a duck pond on their Aes Sedai’s head, but one Wheel of Time Warder was spotted high-tailing it off the set with a strange and powerful angreal known as a “Golden Globe,” with Moiraine Damodred in hot pursuit. Further developments as they come in.

As usual, please continue to follow developments on our casting and news pages and stay tuned for more info as we get it.