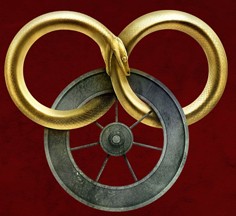 As some of you may already know, this year is the last year that Dragon*Con will have its own Wheel of Time track. David Gordon, the Senior Director of Fan Track Operations, had this to say about the close:

Every year Dragon*Con examines all of its fan tracks to determine whether their fandom is best represented independently or as part of another fan track. While this is the final year of an independent Wheel of Time fan track, the series will continue to be represented at Dragon*Con as part of our broader science fiction and fantasy literature fan track. We expect this to be a fantastic final year for the Wheel of Time's fan track, with Brandon Sanderson returning to the convention to talk about the conclusion of the Wheel of Time series.

I talked to Jennifer Liang about her thoughts on it since she runs the Wheel of Time track. I will also be mentioning a few events before the Q&A with Jennifer. Dragon*Con this year will be running from August 31-September 3.

A few events that will be good to check out include An Evening at the Winespring Inn, tWoTcast's live show, Robert Jordan's Legacy, and the A Memory of Light Preview. The word from Jennifer is that Brandon Sanderson will be attending the Winespring, Legacy, and A Memory of Light events. There will also be other events to check out, like the costume designing panels. There are two: one for the Westlands and one for the Aiel, Seafolk, and Seanchan. Also, there will be several games: Darkfriend, which is essentially a mafia game; Daes Dae'mar, the great game that tests your Wheel of Time knowledge in a team format; and Illian's 8th Annual Trivia Bee. Also, anyone new to the Wheel of Time track at Dragon*Con should attend The Grave Is No Bar to My Call, which is the opening, introductory panel for the track.

Below is the Q&A with Dragonmount's Jennifer Liang.

How did you get started running the Wheel of Time track at Dragon*Con?

In 2000, I went to my first Dragon*Con with my then fiance, brother, and someone that we knew through the forums here at Dragonmount. We didn't spend a whole lot of time there, just walked around for a day. But we had such a great time. Dragon*Con has single topic programming tracks and Jimmy and I both thought that a Wheel of Time track would be so much fun. We really just wanted it as a place to meet the rest of the folks we knew through Dragonmount. So afterwards, I emailed the convention and suggested it. Somehow that email got passed up the chain to Ed Kramer, who was the chair at the time, and he responded very positively.

This was right about when Kramer's legal troubles started, and as was his habit, apparently, he had neglected to tell anyone at the convention that we had been approved. So there were several months of back and forth of me calling and saying "I'm supposed to run your new track! What do I DO???" and them being confused. But Pat Henry, the new chairman, honored Kramer's commitment to us and we were able to move forward. There was a lot of last minute scrambling and flailing around that first year. It was such a stressful experience, I almost called it quits after that first year. I spent a lot of time throwing up in the bathroom and crying during my first few Dragon*Cons. I'm glad I kept doing it, though. Dragon*Con is where I learned how to run a convention. If I hadn't have stayed with it, I never would have developed the skills needed to create JordanCon.

What were your most memorable events from Dragon*Con in the past years?

In 2005, Robert Jordan was the Guest of Honor for the convention. This was right before the release of Knife of Dreams. Dragon*Con does a very large, annual parade through downtown Atlanta. As far as I know, it's the only sci fi convention to do so. Anyways, I asked Jordan if he'd like to march with us. He declined politely, but said he'd come watch. And he did. I remember walking past the Hyatt in formation with the rest of the Wheel of Time group, and there he was, sitting on one of the planters clapping and cheering as we walked past. How many people can say Robert Jordan clapped and cheered for THEM at a convention?

I also have lots of good memories associated with Brandon Sanderson attending. We had him for the first time in 2008. It was the first Dragon*Con since Jordan had passed and Sanderson had just started working on what would become The Gathering Storm. He tells me now that he was terrified of being eaten alive by us that weekend, but we were just as worried about him. After the first Q&A session with him, I think we all felt better. Not only did he have a lot of confidence in his ability to do the job, but he also expressed so much respect for the series and for Jordan. It was very reassuring to have that. It was also the only time he's been able to be just some guy around Wheel of Time fans. The first time I saw him, actually, he was standing in the back of the track room watching us play trivia games and nobody knew who he was. If he tried that now, everyone would be all "Mr. Sanderson! Let me tell you my theories!" I'll always be glad we had that experience.

Do you have anything big planned for the grand finale of the Dragon*Con Wheel of Time track? How do you feel about the track ending at Dragon*Con? Any future plans now that the track is ending?

Our focus this year is the A Memory of Light release. We will do some retrospective on the track itself, but with the final book coming out, we really have too much to look forward to to spend that much time navel gazing. We do have Brandon coming back, so we'll do one last "Tell your secrets!" panel with him and a reading. This is my twelfth and final year as a Director at Dragon*Con, so obviously there is some sadness. There's also some relief. It's not easy to run two major Wheel of Time events every year, so I'll be glad to have some downtime during the year. I am still on very good terms with all of the Senior Directors at Dragon*Con and Pat Henry. Several of them have started attending JordanCon, just to continue supporting us. They've been very clear throughout this that if they had unlimited resources, they would be happy to keep us forever. But this feels like a good time to end it. The series is ending. JordanCon exists now as a gathering place for Wheel of Time fans. Sanderson is moving on to the projects he set aside to work on the Wheel of Time. I'd rather end it now when we are strong than watch it peter out.

I'll be taking my first break from Dragon*Con next year and will attend WorldCon in San Antonio. WorldCon and Dragon*Con are usually on the same dates, so my opportunities to go to that one have been few. Brandon Sanderson is planning to be at that one as well, so it should be lots of fun. I kinda want to see what Dragon*Con is like when I'm just there to hang out like everyone else, but I'd really like to see Jordan nominated for a posthumous Hugo Award, and the Hugos are awarded by WorldCon. So I need to go there and talk Jordan up to the voters. So probably 2014 is the next time you'll see me at Dragon*Con.