Thursdays with Tynaal: Book Review (The Sum of All Men) 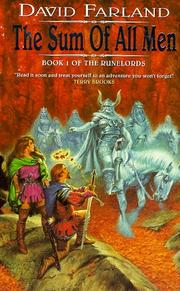 David Farland - The Sum of All Men

This is one of those books that I randomly bought, not because the cover art was great - although I do quite like it - nor because the summary seemed particularly interesting, but simply because it's part of a series of books and not a stand alone novel.

I found that it had been a good buy, since I enjoyed the book immensely. At first, it seemed like the typical plotline. A prince goes to woo his princess and then disaster strikes. Well, that is how it started, but then there were no great battle scenes. It turned out that the antagonist, Raj Ahten, had a voice and face to sway even the toughest of warriors. This resulted in an invasion of a country with blood hardly being spilled.

Our prince, Gaborn Val Orden, is the main protagonist. With a sharp wit and common sense, he manages to scare away Raj Ahten in the final battle of the book.

He seems to be the one character that will be Raj Ahten's good counterpart. The great thing is that the story doesn't turn out like a fairy tale; instead, the good side also takes hard blows. Characters die and prove to be weak when you thought they'd be steadfast and eternally good.

The book is written in an excellent style that keeps you guessing about the political intrigue and which side really is the good side. Gaborn might be fighting for the people of his country selflessly, but is he seeing the whole picture? Could Raj Ahten be the sensible entity who will save the world? Since the characters seem so incredibly powerful, the reader always expects some twist in the story. Believe me, there are plenty of those twists and none of them play out the way you would have expected.

The Sum of All Men is definitely a good read if you're wanting an exciting book, but please, stay away from it if you're planning on only reading a chapter or two. Believe me, you won't be putting this one down.