Thursdays with Tynaal: Book Review: The Deed of Paksenarrion 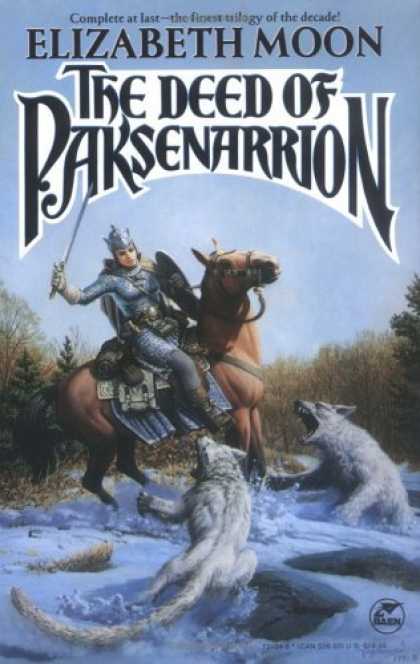 The Deed of Paksenarrion by Elizabeth Moon

There are never enough books, so I have another you could have a look at. I read the omnibus, so the review is on the entire trilogy.

The story follows a young woman by the name of Paksenarrion, who leaves home to escape an arranged marriage and joins a mercenary army. She seems to be just another soldier, if more focused and intent on becoming a good warrior. But stranger and stranger things continue to happen, and the eye of evil is drawn to Paks. It does take quite a few unexpected turns and the story takes quite the road of development.

I have decided that this is a book that I have to reread to figure out my opinion. The novel is less like a magic inspired fantasy book, despite the magical elements within it, but more like war fiction. What I found strange about Elizabeth Moon's style of writing is that she seems to describe a lot and explain things in depth. And then suddenly before you know it, you have a few action packed pages and it goes back to normal. Another thing that really grabbed me was that extremely emotional passages (well, they definitely were for me) would sneak up on you, and before you knew what was happening, you'd be bawling your eyes out. The war and fighting scenes are written very well and pull you right in, and I must honestly admit that I rarely had to make myself read the less interesting parts. In a world like Tolkien's Middle-Earth, with Orcs, Elves, and the like roaming the land, Elizabeth Moon takes her character from a naive young girl to such a likable and, in her own ways, wise character. I don't think you could easily find someone who dislikes the character of Paksenarrion. She is driven, kind, honest, and despite all the things she achieves and all the fame she gains, she never rests on her laurels and stays as down to earth as she always was.

The next bit contains a slight spoiler. One thing that moved me so immensely and simply made me love Paks was the fact that she realized how much her suffering meant and how much it shaped her. She had the wisdom to see the positive things about her scars as opposed to only remembering the pain. As such, when the Lady of the Forest offered to heal them for her, she declined.

Paksenarrion becomes a real character to any reader. Elizabeth Moon managed to balance her triumphs in equal measure as her wounds. Paks makes mistakes like any of us would and faces choices that are so easy to relate to. She's definitely a great character.

I think that this is definitely a must read. You can even read the first book for free (and legally!) online at Baen Books.