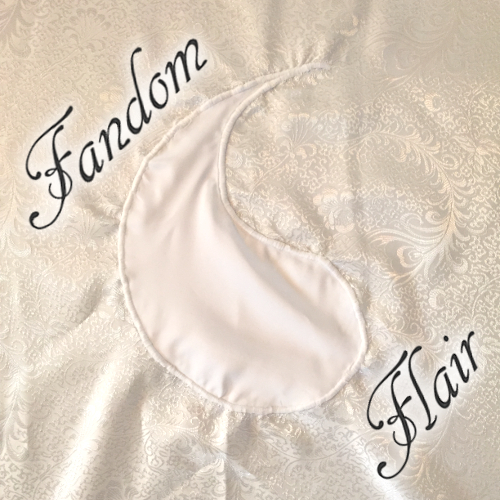 Studio Ghibli is currently in the middle of a film festival, showing one of their classic anime movies each month.  This Studio Ghibli Fest is occurring at select theaters all around the country.  So far, they’ve shown My Neighbor Totoro, Kiki’s Delivery Service, Castle in the Sky, Nausicaä of the Valley of the Wind, and this month’s addition will be Spirited Away.

Spirited Away is one of my favorite anime films—and one of my favorite movies too.  I love the themes of bravery, perseverance, and the ability to see one’s soul instead of their physical body.  It’s a wonderful tale, and has so many beautiful characters.  The growth of Chihiro as the movie progresses is phenomenal.  She starts out so sheltered and winds up confident and capable. And Haku is my favorite male within the Ghibli universe.  He’s amazing! Plus the fact that he’s a dragon makes him the best in my book!

In preparation for seeing the movie on the big screen, I wanted to try to craft a Haku scarf.  I followed this tutorial, which was pretty easy.

Cut out the pieces
This is the hard and boring part, but oh so necessary.  I put on music, or an audiobook, which helps keep my mind occupied during the arduous task.

Sew the head
I loved that this part was done first.  It let me see Haku’s adorable face which really motivated me to finish the project. You can sew the eyes and nose on, but I used an iron on fabric adhesive.  Much quicker and gives it a nicer appearance.

Sew the body
This part got kind of tricky.  I had to sew the back ridges into the body like a sandwich.  Plus it’s so long, it felt like I was sewing forever.

Sew the tail
This was also tricky to sew because of the points and ridges.  But since it was small, it wasn’t a big issue.

Stitch them together
I hate sewing by hand.  I’m terrible at it, and I can’t hide the thread the way the tutorials show me.  I’ve never gotten the hang of it.  So, my stitches are visible and clumsy, but I got a Haku in the end!

Stuff it?
The original tutorial made a scarf.  But as soon as I was finished, I thought it was such a wasted opportunity.  Why have a scarf when you could have a ginormous Haku plushie?  So I used a ton of polyfil and stuffed my dragon.  This was the hardest part, getting the stuffing all the way up his body.  It probably took me thirty to forty minutes.  I was using every device I had to get the fluff up his butt.  In the end, it was worth it!  The finished Haku is beautiful and so cuddly!

I can’t wait to wear my Chihiro casual cosplay outfit, wear Haku around my neck, and see this movie on the 30th of October.

For next time, I might make something to accompany me to the showing of Howl’s Moving Castle.  Stay tuned, and thanks for reading!