A Roll of the Dice: Break Out the May Poles, Festivals Are Coming! 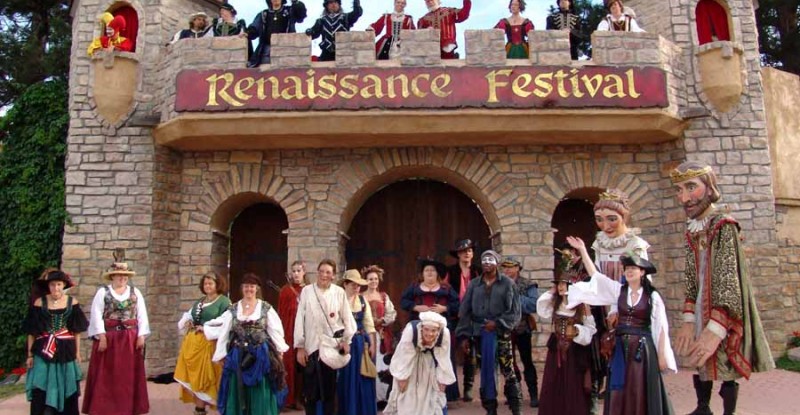 Greeting all! It is Thursday again meaning it is time for another installment of the Rotating Feature blog! The dice have been been tossed and the featured topic has been chosen.

It is February and in the southern U.S. warmer weather is just weeks away. As spring get closer around so does Renaissance Festival season. Potters, cobblers, smiths, leather-workers, and tailors are finishing up the last of their winter work in preparation of months of traveling from state to state to sell their wares. Warmer weather will bring not only a chance to immerse yourself in a different time, but also to prepare for any conventions you plan on attending by picking up some hard to find, or hard to make, items.

Finding a Renaissance Festival near you is easy to do with a quick internet search. Here is a link showing festivals in each state. Some are sooner than others; the Bay Area Renaissance Festival actually starts this weekend here in Tampa, Florida. Others in more northern regions will start in summer months when the weather is more cooperative.

Admittedly finding results outside the United States is a little harder; however, I am sure if you search for festivals by country you can probably find something. I was able to find a decent link for festivals in Canada, unfortunately I did not have such luck with the rest of the world. Wikipedia does have some Renaissance Festivals listed around the world though.

Hopefully by now you can find a festival near you, but do you know what to expect? Renaissance Festivals, aka Renaissance Fairs or Renn Fairs, can take place in a field with a bunch of tents or can be a permanently built up site. Most at least have a few wooden structures. The vast majority of the tents or buildings will be vendors.

Vendors can be local residents who do blacksmithing, pottery, tailoring, etc, or can be people who make their living by traveling from place to place selling their wares at festivals. Vendors will have items priced from a few dollars up to a few thousand. This is because many of the items are hand crafted, and hand crafting takes time which drives the cost up; however, hand made goods are typically higher quality. If you just want to go to casually shop for bobbles, eat, and take in the shows, $50 can get you through the day and you can walk away with a souvenir. If you want to buy some clothing, have a few drinks, play a few games, then around $100 should be sufficient. If you are going to buy any type of armor or boots, my suggestion is to get a two day pass so you can shop the first day and enjoy the festival. Then after you know what you want you can take in the shows and purchase your high dollar item the next day. I say this because I do not encourage anyone to walk around anywhere with more than $200 in cash on their person, and if you pan on buying boots or armor, leather or plate, expect to pay $200 or more.

Some vendors may be able to accept credit or debit cards, but all will accept cash. I would get cash prior to getting to the festival for two reasons; first you may need to pay for parking, and second because if the festival has an Automated Teller Machine (ATM) the fees to pull out cash will be very high. The highest withdraw fee I have seen at a festival was $15.00; I avoid using ones on the festival site at all costs.

Renaissance Festivals are more than a traveling medieval strip mall; there is much more than just vendors! Many festivals have a cast, which includes tryouts and a month or more of rehearsing. These actors provide walking entertainment to guests by playing roles such as the King, Queen, lords, ladies, guards, the clergy, peasants, and yes even the village idiot! Some of the cast may play games with the customers and put on some shows such as a human chess match. The festival’s actors may be viewed as roaming entertainment while patrons shop or wait for the next show.

Shows at a festival can be great and really try to appeal to a wide audience. The most prominent of the shows is the joust! Yes, people actually get into real armor, ride real horses, and have a joust! I have also seen multiple comedy shows, sword fighting displays, and of course musical performances. You can really see a lot of things at these festivals, and many of the performers have been doing this for years and are quite talented. Walking from show to show and perusing the shops you will work up an appetite.

Most festivals will also have food concessions too. Some do it better than others, and some of the food can be quite anachronistic, but sometimes you just want to walk around eating a turkey leg! On the other hand if you are looking for a better dinning experience, I have some tips to help you find better food! First look for a sit down eatery. This may seem way too easy, but at a festival you may actually walk past the nicest restaurant there and not even realize it. So really look! Next tip, ask the vendors where the good places to eat are, but do not ask the actors. The actors may get free food at the normal run-of-the-mill eateries and never deviate from said menu, but not the vendors. As I mentioned earlier, many of them do this for a living, and they know where the good food and drink are!

In conclusion, go for the atmosphere, the shows, or to shop. Renaissance festivals are a blast and I highly encourage everyone to go at least once. You don’t even have to go dressed up in period clothing, or talk in a fake accent. Here is a link to a song parody done by a Renaissance Festival cast; it pretty much some up this rotating feature blog installment.


As always please let me know if you have anything you want covered in the Rotating Features blog! Until next week, this is Azeryn signing off to go slay the swarm of mosquitoes in my backyard with life sized Lews Therin Bug Zapper!