Celebrating the 20th anniversary of the official Wheel of Time video game. 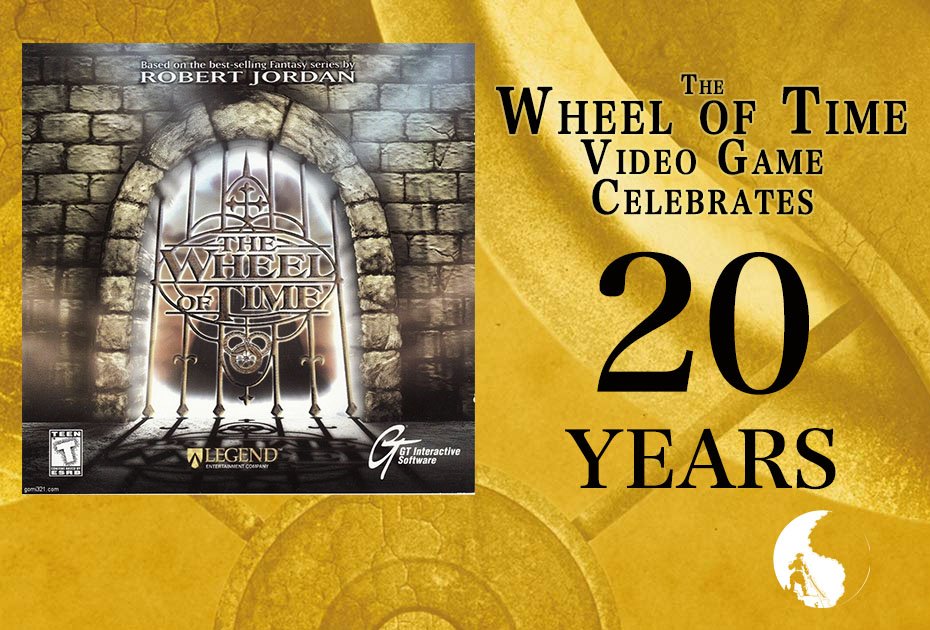 Adam Whitehead is Dragonmount's TV blogger. Adam has been writing about film, video games and television, The Wheel of Time, and other genre fiction for over fifteen years. Be sure to check out his websites, The Wertzone and Atlas of Ice and Fire (including The Wheel of Time Atlas!) as well as his Patreon. Please note this article contains very mild spoilers for The Wheel of Time novels.

Way back in the day, the video game industry got surprising mileage out of video games based on novels. Cheaper than licencing actors’ likenesses for games based on films and not constrained by matching release dates (for “release synergy,” a term that destroyed many a promising video game adaptation during gestation), book-to-game adaptations provided a relatively cheap way of enticing fans to try out a developer’s latest project.

One of the first licensed video games from a novel was The Hobbit, published by Melbourne House in 1982. Based on the works of J.R.R. Tolkien, this was a text adventure which cast the player as Bilbo Baggins, embarking on the traditional adventure to kill the dragon Smaug. The game was a huge success and also sparked some very early memes such as Thorin’s rather frequent tendency to sit down and start singing about gold whenever he was bored. The Hitch-Hiker’s Guide to the Galaxy, released by Infocom two years later, was in a similar vein but had greater kudos because Douglas Adams himself worked on the title as a writer and designer.

Novel adaptations went huge in 1988 with War in Middle-earth, another Tolkien adaptation, this time by the visionary designer Mike Singleton. A dynamically-unfolding wargame, the title allowed players to refight the War of the Ring using a variety of different factions and characters, sometimes resulting in radically different results to the novel.

The 1990s saw Terry Pratchett’s Discworld series adapted as a trilogy of best-selling games, as well as a version of Terry Brooks’ Shannara series that is best ignored. Arguably the most successful such book adaptation of the decade was Betrayal at Krondor (1993), based on Raymond Feist’s Riftwar series. An expansive, semi-open-world CRPG, it worked as both a very good video game and a very strong adaptation of the books (although, ironically, Feist’s own novelisation of the game is arguably his weakest book).

It was in this time period that The Wheel of Time got its own video game adaptation. Released on 11 November 1999 by GT Interactive Software, The Wheel of Time took Robert Jordan’s expansive, vast world, cast of thousands and epic battles and turned them into a…first-person shooter? It was an interesting and bold choice, one that turned off a lot of fans who’d been hoping for a roleplaying game, but once they got over their shock at the design choice, they soon found a very interesting game.

The game was developed by Legend Entertainment, who’d previously made relatively straightforward adventure games. The team at Legend decided to make a much more ambitious title and, after their company was slightly oddly bought out by Random House, they decided to focus on a novel adaptation (even more oddly, of a non-Random House series). The design team tore through The Wheel of Time and began to design an adventure game that would retell the story of the novels. It would be expansive and large.

Robert Jordan had other ideas. He didn’t want the game stepping on his toes (he was still only halfway or so through writing the series) and he didn’t want the game to use other versions of his characters. The designers came up with the notion of setting the game in an alternate dimension, a Portal Stone world, where events could take place that echoed those of the books but were distinctly not the same. It was also decided to abandon the adventure design in favour of a first-person perspective similar to other games of the time, such as Doom. This was markedly ambitious for Legend, who’d never made such a game before, but they took it in their stride.

Budget restrictions meant that they had to look around for a customer engine rather than designing their own, and after considering the BUILD and Quake engines settled on the engine for a game still in development that was extremely obscure, called Unreal. The Unreal developers were surprised that anyone would be interested in licensing their engine and the Wheel of Time team got it on extremely generous terms. As development continued, the Unreal team saw the development of Wheel of Time and some of the ideas fed back into their own game in development. Unreal was released to massive success in 1998 and quickly became the go-to engine for first-person video games. The Unreal Engine today powers a vast number of games, from indie hit The Outer Worlds to the epic Mass Effect trilogy to the mega-successful Fortnite, which have collectively sold hundreds of millions of copies.

On its release, The Wheel of Time attracted glowing reviews…but not much sales. Barely 30,000 copies were shifted in the first three months on sale, shooter fans more energised by the then-recently-released Half-Life, SiN and Quake III. Legend’s expertise with the engine saw them hired to make Unreal II: The Awakening, which should have been a huge hit, but by then the excitement had moved onto the online version of the franchise, Unreal Tournament, and Unreal II was not a huge hit either. Legend shut down in 2004.

The Wheel of Time game is an odd beast, but a strangely compelling one. It casts the player as Elayna, an Aes Sedai who can barely channel (think of Morgase Trakand) but whose powers have been augmented by ter’angreal. A trusted lieutenant of the Amyrlin Seat, she is dispatched to Shadar Logoth in pursuit of an assassin, the Hound, who managed to penetrate the White Tower itself. As the story unfolds, it is revealed that the Forsaken Ishamael is looking for the seals on the Dark One’s prison. At one point there is a coup by the Black Ajah inside the White Tower which results in the death of the Amyrlin and Elayna’s rise to replace her, along with the revelation that Elayna is really the most powerful Aes Sedai born since the Breaking, her powers sealed off to protect her until she learns to use them correctly. In a final battle, the Hound, now bonded to the dark power Mashadar, tries to kill both Elayna and Ishamael but is defeated. Elayna unlocks her powers and uses them to protect the Seals, ensuring the Dark One cannot escape his prison until the Last Battle and the arising of the Dragon Reborn.

The plot is interesting but clearly at odds with the books, with the developers confirming that the game takes place in a Portal Stone world, a parallel universe similar but not identical to the books, and certainly the game is not taken to be canon in any way.

From an architectural level, the game is phenomenally well-designed, with some fantastic locations that look like they’ve come straight from the books. The darkness-shrouded streets of Shadar Logoth and the gleaming white walls of Tar Valon are rendered well and the storyline is intriguing, although confusing given the game’s setting in a parallel universe to the books (not something that’s made hugely clear in the game, it has to be said). The cast of characters is well-drawn, and it’s still refreshing to see a first-person shooter based in a fantasy setting with a female protagonist. The use of ter’angreal instead of the normal array of guns from a shooter is something that does feel contrived, but it works quite well and makes for an exciting action game. Trollocs, Myrddraal, Black Ajah and Whitecloaks make for fun enemies to engage in combat with, and there’s a nice feeling of dread in the battle of wills with the Hound, your character’s nemesis. Originally there was going to be a whole “evil campaign” with you playing the Hound, but this was cut for time and budget reasons.

The Wheel of Time is a surprisingly solid game (especially by the conservative standards of the time), but it can’t be denied that a Quake-style 3D FPS feel like an awkward fit for Jordan’s huge, narrative-driven fantasy epic. The game feels like it should have been an RPG with a lot more choice and consequence, drawing more on Jordan’s vast world. The ambition was there, but sadly the budget and required time was not. Arguably we wouldn’t get a novel-to-video game adaptation that really hit that spot until the release of The Witcher (based on Andrzej Sapkowski’s books) in 2007, and in particular its second sequel in 2015, almost certainly the greatest CRPG released this century.

We must pause, of course, and remember that although Legend’s Wheel of Time was the first official, licensed video game adaptation of the series, it’s not the only one. In 1993 The Wheel of Time MUD (multi-user dungeon) was launched, a relatively primitive, fan-made dungeon game with a text interface. It was quite popular with the MUD scene. More recently there’s been a number of “mods” – fan-made modifications of commercial games – focusing on a Wheel of Time theme. The most notable is The Gathering Storm, a mod for Mount & Blade, and there’s been various mods for Skyrim, introducing weapons and armour from the Wheel of Time world. There’s also been a number of abandoned mods, such as ones that were in development for several years for Civilization IV and Rome: Total War, and rumours of one for Crusader Kings II. The completion of the books seemed to erode fan enthusiasm for more mods, and the scene has been quiet for a few years now.

Of course, with The Wheel of Time now heading to the television screen, the question arises if a new video game could be on the cards. Given modern game budgets are now averaging towards the high tens of millions of dollars and development time is in years, it’s questionable, but if the Amazon TV series is a huge success it may be something we’ll see before too long. Hopefully this time it will be a game that gives the setting and Robert Jordan’s writing the scope and scale it deserves.

Further Reading: The Wheel of Time video game producer (and budding fantasy novelist), Glen Dahlgren, has published several interesting articles about the game: a 20th anniversary retrospective, a very in-depth account of the making of the game and the game's original design document. All well worth a read.