This “Fantasy Review” is for The Stone Sky, the third and final book in The Broken Earth series, by N.K. Jemisin. 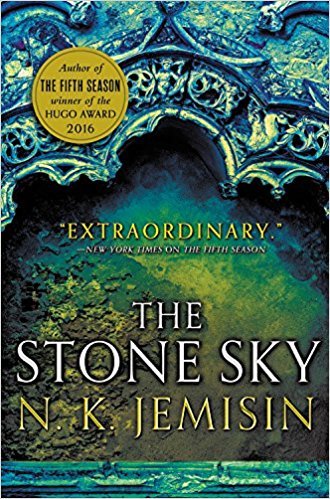 This “Fantasy Review” is for The Stone Sky, the third and final book in The Broken Earth series, by N.K. Jemisin.

Essun is still determined to find her daughter, Nessun.  The comm of Castrima Under—where Essun currently dwells—has been damaged by their war with Rennaris.  The people must find a new place to ride out the Fifth Season.  Due to Essun’s annihilation of the Rennarin people, the comm decides to travel the far distance to the now-abandoned city.  Essun’s still plans to grab the moon when its orbit circles close, but there is still time before she must leave her place within the com.

Nessun, meanwhile, begins her trek to the other side of the world, with Shaffa and the Stone Eater, Steel, as companions.  Steel can transport them through the earth, but Nassun fears the Stone Eater may “accidently” lose Shaffa on the journey.  This means a longer way is necessary, going to an ancient station capable of taking them through the earth’s core.  But at the earth’s center is something far more frightening than Steel’s mode of transportation.

Mixed in with these two accounts is a flashback into Hoa’s past, where the events that lead to the war with Father Earth are finally revealed.

I loved the addition of Hoa’s storyline.  It was terrible seeing the beginning of orogenes and the atrocities the ancient society did in order to maintain peace and balance.  The choices Hoa and his kind made are understandable, and parallel the conflict within Essun and Nassun.  Essun wishes to save the earth by grabbing the moon.  Nassun, based on Shaffa’s pessimistic—or maybe weary—view of the world, wishes for it, and Father Earth, to die.

I was also pleasantly pleased by the actual ending, the last chapter.  SPOILER: I thought the perfect match for Essun was Innon and Alabaster; the three of them together made a wonderful family.  However, seeing her paired with Hoa was heartwarming.  Essun’s life was so horrible and filled with so much tragedy, it was uplifting to see she wound up with a happy ending.

Once we got the reunion between mother and daughter, the character motivations were understandable, but rather annoying.  The reader has the benefit of seeing the character’s thoughts, so I was frustrated when the two were unable to communicate their desires to the other.  Like I said, understandable considering all that had happened between them, but at the same time, I wanted to shake them both and make them talk it out!  Alas, too much had transpired, too much harm had been done—to both of them.

Conclusion:
This was a fantastic final.  Satisfying and rather hopeful for a brighter future.  I’d been doubting whether this would have a happy ending or not.  And it surprisingly does.  Or maybe—to coin a phrase from the romance genre—a Happy For Now.

I loved everything about this series, the characters, the world, the magic.  It was emotional the whole way through, tugging on my heartstrings over and over and over.  I was very sad when it ended.  I could read so much more in this world.  Perhaps Jemisin will revisit the world a thousand years in the future—like Brandon Sanderson’s ideas for Mistborn.