This edition of “Fantasy Review” is for The Obelisk Gate, the second novel in N. K. Jamisin’s The Broken Earth series.  This book was also awarded the Hugo for Best Novel in 2017.  It’s easy to see why. 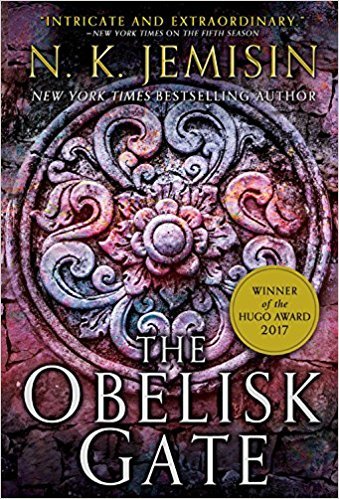 This edition of “Fantasy Review” is for The Obelisk Gate, the second novel in N. K. Jemisin’s The Broken Earth series.  This book was also awarded the Hugo for Best Novel in 2017.  It’s easy to see why.

Reunited with Alabaster, Essun once again becomes the learner. He has plans—and since he is turning into a rock—it’s up to Essun to finish them. They try to make the best of things in their new comm, Castrima, but when the world is breaking down, no place is safe.  Not only do they need to contend with a dwindling food supply due to the ash-filled sky, but wild animals mutate during a Season, and their evolved abilities can be devastating.  When Alabaster finally reveals his mission of catching the moon, Essun wonders if she can accomplish such a fete.

Meanwhile, Jija and Nassun travel for a year to reach the safety—and a promised cure for orogeny—in Found Moon.  There, Nassun is put in the charge of three Guardians—all of whom have panicked and given their bodies over to the voices inside their heads.  The leader of the bunch is Schaffa and he takes a particular liking to Nassun and eventually makes the connection of her being the daughter of Syenite.  While Jija wants Nassun to cure herself of orogeny, her desire to help Schaffa pushes her powers to new and startling depths.

These characters are amazing!  So developed, captivating, realistic.  It’s easy to understand Essun’s choices and her point of view of the world.  Her struggles—trying to piece together the life of Syenite, which Alabaster represents, and her life as a mother, which Lerna represents—resonate with raw emotions.  This was another book that made me cry.

The evolution of the magic system is one of the main driving forces in this novel.  With Alabaster’s help, Essun is able to sense something that is not orogeny.  It’s described as silver, and it is dubbed as “magic.”  With magic and orogeny, Essun’s task to grab the moon may be in reach.

Nassun takes more prominence.  Her powers grow incredibly fast once she’s under the care and guidance of the Guardians.  It’s hard to get a good read on Schaffa’s character.  He’s been portrayed as nothing but evil since book one, and Nassun’s favorable opinion of him makes me think he may be redeemed.  Or perhaps he’s able to con Nassun easier than he could Syenite.

And though Alabaster is not very active in this storyline, he is still my favorite character.  Though I also grew to like Hoa—the stone eater who has claimed Essun.  The end of the first novel revealed him as the narrator, and knowing that it’s his perspective gave a lot more insight to his character.  I’m really interested in the link between orogenes and the stone eaters.  It seems like an Aes Sedai/Warder type relationship, but it does have hints of something more sinister.

The pace slowed down a lot from the first book.  In The Fifth Season, it covered three different timelines spread out over 30 years.  So for this novel to have the scope of only one year, it seemed like not many things were happening at once.  Not necessarily a bad thing, a slow pace does not mean a boring book.  But for me, personally, it didn’t feel as sweeping and encompassing as the previous novel.

I am amazed at the writing of the these novels, the tone and voice, the growth of characters, the details of the world.  This one slowed down a bit, but I’m still loving the journey.  I’m hoping the concluding novel, The Stone Sky, gives me the epic finale I’m waiting for.