This edition of “Fantasy Review” is for The Fifth Season, by N. K. Jemisin. This story was the winner of the 2016 Hugo for Best Novel.  And it was a fantastic read! 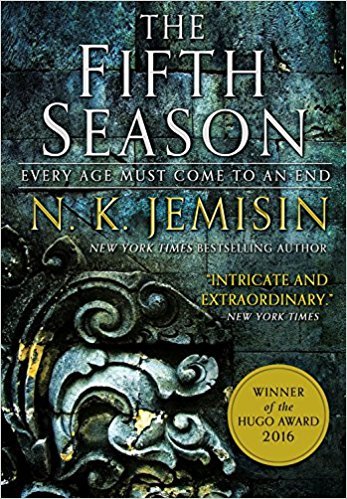 This edition of “Fantasy Review” is for The Fifth Season, by N. K. Jemisin. This story was the winner of the 2016 Hugo for Best Novel.  And it was a fantastic read!

The earth is in fluctuation.  Father Earth hates the humans who inhabit him, and he is constantly spewing his molten blood to their surface homes.  Periods where his anger is most fierce are called Seasons, and ash clouds block out the sky for decades, if not centuries.

Essun doesn’t even notice when the Season starts because she is lost in grief over the death of her son.  He was murdered by Jija, his father, her husband.  Jija discovered the child was an orogene—a person given less-than-human status who is able to control the shifts and energy within the earth—a skill inherited from Essun.  She sets out to track Jija down and make him pay for the murder of her youngest child.

Damaya is a girl who recently discovered she was an orogene.  A Guardian—members who keep the orogenes’ magic in check—is sent to bring her back to the Fulcrum to learn to control her powers.  The Guardian is not there protect her, but to protect the rest of humanity from her.  She struggles to find her place in life and in the Fulcrum.

Syenite is a four-ringer orogene.  She is chosen for a mission, and is forced to take Alabaster—a ten-ringer—along.  The Fulcrum pairs them with instructions to mate.  The child of Alabaster is sure to be powerful, so he is often used in breeding.  The two are an unlikely couple, but along the way they bond over trials and tribulation. But Alabaster’s more than a little mad, and he might drag Syenite into insanity with him.

The synopsis is long and detailed because the story and its characters are so detailed.  The richness of this tale cannot be explained with words.  It is emotion, deep and sometimes unsettling.  The world is cruel and the characters seem to suffer more than their fair share of the despair.  But they all persevere.  It is a theme through the novel: no matter how often Father Earth sends ash clouds, the human race has not died off yet.  But, the story seems to suggest maybe they should.

Out of all the characters, I loved Alabaster the most.  I could see a bit of Rand in him—driven slightly mad by the infinite power he can wield.  He cracked under the strain of his life, but kept living in spite of it all.  He and Syenite together were wonderful and engrossing.  Though never a true romantic pairing, there is a sense of love between them—transcending the bond forged from forced lovers.  Their time together was the most enjoyable to read.  Syenite herself was just as capable as Alabaster, but not nearly as wounded from the ways of the Fulcrum.  Much of that may have stemmed from her powers—she’s nowhere near as powerful as him.

One scene in particular with them made my heart ache with its loveliness.  My emotions were stirred so deeply, I thought of this scene for days.  But I won’t say more, in fear of too many spoilers.

The stories of Essun and Damaya were both interesting.  The pain in Essun after the loss of her son was so vivid.  And Damaya, packed up and shipped off to a place she would lose her status as human, was equally pitying.

I couldn’t get enough of this world and these characters.

The format.  I’ve made statements about this in regard to other books.  It think this is my old-fashioned look on genre fiction.  The standard is 3rd person omnipotent, past tense.  Those are the rules.  I think this works because when dealing with such fantastical ideas and worlds, clear and concise language solidifies it in the mind of the reader.  But, this is all personal preference.  It had no bearing on the enjoyment of the story.

The weird—or maybe “not common” is a better description—format in this novel comes at you from two fronts.  First, the writing is done in present tense.  Not a big deal in the grand scheme of things, but something that readers might not be used to.  And the other front?  All the chapters from Essun’s perspective are written in 2nd person point of view.  The reader is given the persona of Essun, letting them experience the world more clearly through her eyes.  The other characters remain in 3rd person.

Does this format work?  Yes, it does.  It’s sort of explained why this format is used, as well.  I will be honest and admit it threw me off at first.  However, the characters, plot, and setting quickly grabbed me back and steadied me.  After I got used to this way of looking at the story, it was not a hindrance at all.

And that is the only con I can even come close to saying.  This novel was brilliant and near perfect in its execution.

I was awed by this story.  The worldbuilding was incredible, the characters three dimensional with flaws and faults, their exploits riveting.  It’s very easy to see why it was awarded the Hugo.  The day I completed this novel, I began reading the second in the series.