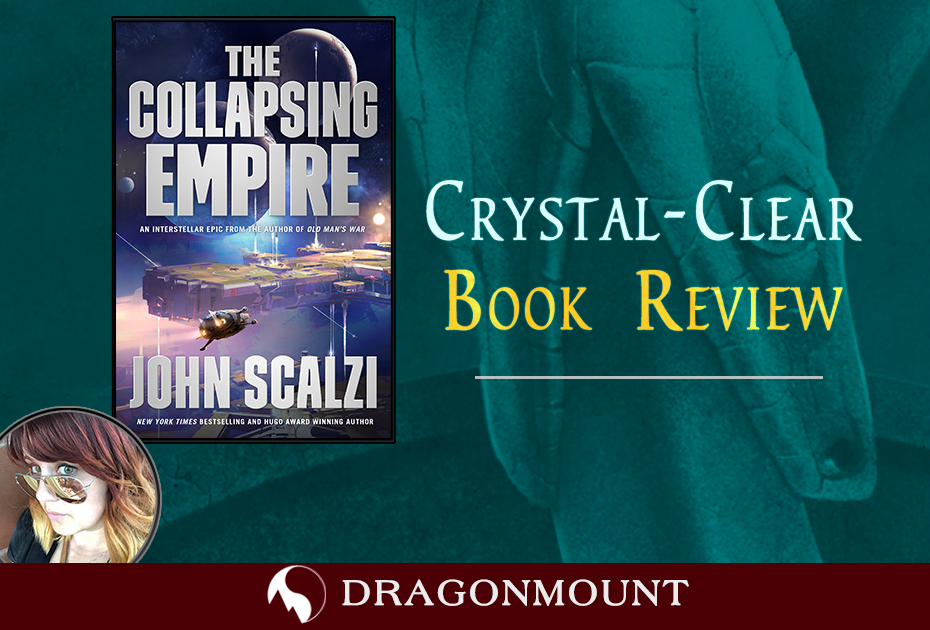 The Collapsing Empire by John Scalzi

I have reached an important conclusion concerning my identity as a reader. I am officially a science fiction fan. I can go on to add a willing and excited reader of science fiction. I am new enough to the genre to know I still have a lot to explore, but my first few forays in the world of science fiction have been a triumph. The Collapsing Empire by John Scalzi is no exception. In fact, since finishing this book I have already gone on to begin book two. In my mind that is the highest compliment I can give to an author; to immediately read more of their works.

I learned that for me to truly invest myself into the world a fantasy or science fiction author creates, there has to be a certain level of familiarity. A blend of what truly exists in our world and the unique features of the universe that they have created. It is a delicate balance to borrow and adapt without seeming to “steal” too much of our reality. It is a dance I face daily in my own writing, and one that I think Scalzi executes masterfully.

Being a relative newb to this genre, I often find myself rereading passages to make sure I understand what is being conveyed. When reading The Collapsing Empire, the rules of the world were presented in such a fashion it was almost as if I had always known of their existence. I hesitate to give away too much of this gem, but the book is set up as the possible future of the human race after Earth has been lost, or at least deemed uninhabitable. The majority of the population is spread throughout the universe and living on planets that are not truly inhabitable. The only civilization that lives on a planet’s surface, is the End.  In order to survive they make use of The Flow, to sustain trade and keep each planet supplied with that they need to survive. The Flow, which is essentially a one-directional worm hole between planets is essential to the survival of the entire Interdependency. The question becomes, what happens when this pivotal network no longer functions as it should?

Since its founding, the Interdependency has been led by the Emperox from the Wu family, and as the story begins the leader of the Universe is dying and his unwilling daughter is preparing to assume the weight of the entire system on her shoulders. As is true of any ruler, there are those who wish to control, or even replace her right from the first moments of her rule. While most of the story is told from only three characters' point of view, we are shown the deep impact of their decisions on the fate of the human race.

This succinct and captivating novel can easily be finished in one midafternoon reading marathon, and Scalzi’s characters are so engaging that you truly won’t want to put it down. As I read the last sentence, I found myself feeling very grateful that I was able to immediately begin the next book in the series. I think having to wait for the next book would have been a reader’s torture. Do yourself a favor and pick up this book to have on hand for when you have a few hours to yourself. I can confidently say that you will enjoy this highly accessible Space-opera.

The Collapsing Empire by John Scalzi is available from Dragonmount's store as a DRM-free ebook. You can also purchase it on Barnes & Noble, Amazon, and your local independent bookseller.