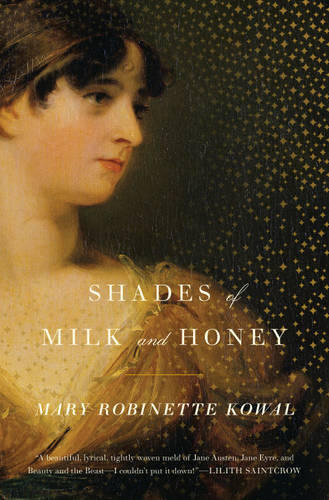 Welcome to another edition of Dragonmount's Fantasy Review.  This will contain slight spoilers.

Shades of Milk and Honey

Set in an alternate history of Regency England, Jane Ellsworth—an old maid at twenty-eight—has resigned to being unnoticed while her younger sister, Melody, takes in all the suitors around.  However, Jane's skills with glamour—a magic that involved taking "folds" out of the ether—is skilled and unrivaled.

Jane has feelings for their neighbor Mr. Dunkirk, but he seems to only have eyes for Melody.  But when Captain Livingston takes up residence next door, and shows an interest in Melody, Jane feels pleased that she might finally be the object of Mr. Dunkirk's affections.  But to complicate the situation further, Livingston has also shone an interest in Dunkirk's sister—Elizabeth—as well as his own cousin—Miss FitzCameron.

In the midst of it all, a rival shows up, Mr. Vincent, with glamour powers equal, if not surpassing, Jane's own.  As she struggles to win Dunkirk's notice, and keep out of Vincent's, Jane has to help Melody and Beth stay out of trouble with Livingston.

The tone of this story is very true to its Austin-esque inspiration.  The dialogue, the character's motivations and goals, the interactions with society, all fit the era and the mood.  It's true to that genre without being difficult to read or follow.

The love triangles (or rectangles) are nothing new, however Jane's plight of being the ugly sister is uniquely refreshing.  We see the story from her angle, instead of the pretty one who goes to all the society dances.  Jane is the outsider—and though her skills with the magic system are impressive—it's not enough to win her a husband.  I really enjoyed the contrast to the normal heroine.

The magic system was interesting, however, it didn't add too much to the overall story.  It worked its way into a few of the plot points, but not so much that we were given a detailed explanation of its uses and limits.  It's never quite explained what the ether is, and what the magic's point is in the world at large.

However, I believe this is rectified in the sequel, Gamour in Glass.

I wasn't sure what to expect when I read this book.  Having never been a fan of the Romance era stories, I wasn't quite sure I'd like this style.  However, his tale was simply, yet elegantly told.  Kowal did a magnificent job keeping everything within the Regency realm.  A little bit of romance, a little bit of magic, a little bit of Austin-esque lingo all perfectly combined for a great read.

If you're interested in giving this book a try, you can buy it DRM-free from Dragonmount's eBook store!  And for more by Ms. Kowal, you can also check out her Writing Excuses Podcast, which is co-hosted by Brandon Sanderson, Howard Tayler, and Dan Wells.