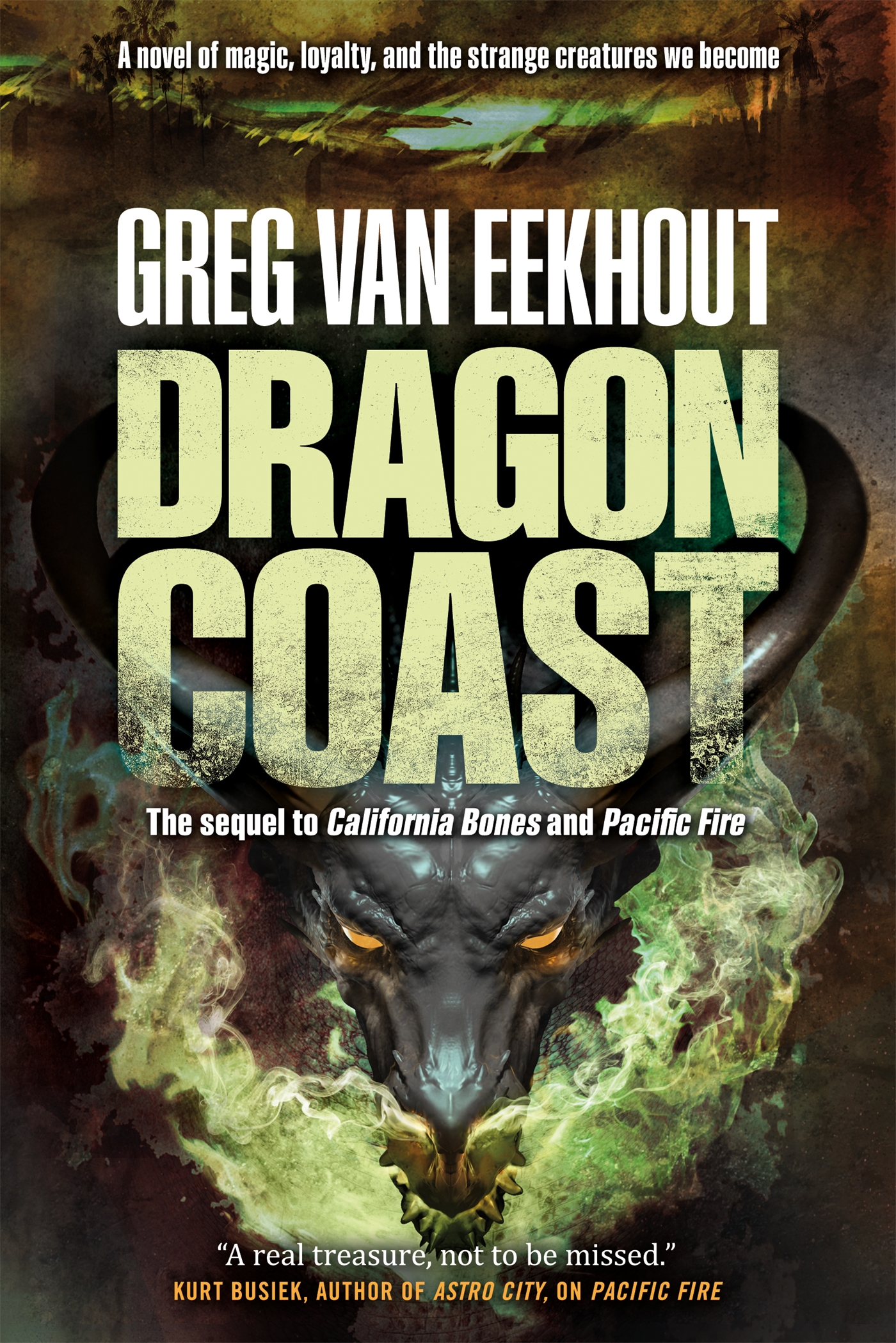 Welcome to another edition of Dragonmount's "Fantasy Review."  This time, I had the pleasure of reading the thrilling conclusion to Greg van Eekhout's Daniel Blackland series: Dragon Coast.  This book will be released next week, on September 15th, 2015, and can be preordered in our eBook store.

It's been a year since Sam was dissolved into the Firedrake, and Sam's consciousness is starting to rouse itself inside the dragon—he's trying to take control of the beast's primal urges.  He's having a hard time, as the dragon is bigger, stronger, more magic than Sam.  But as he pokes around the dragon's insides, he becomes aware that there are others inside with him.  Are they allies or enemies?

Daniel's been tracking the Firedrake for the past year with Moth and Em as companions.  He has plans to leak Sam's essence from the dragon and return it to another golem.  But when Daniel finally tranquilizes the beast, agents from Northern California steal Daniel's adopted son away.  Now Daniel needs to go into enemy territory, and what better way to gain access than to pose as his own golem, Paul?

As Paul, Daniel is given access to a life of luxury.  But what he really needs to free Sam is a bone the Northern Heirarch keeps.  It looks like he and his crew are up to their old ways, looking for the best way to heist the crown jewels right under the Heirarch's nose.

This novel continues the excitement and thrills of the first two books in the series.  Daniel's desperate now to get Sam back, and he turns almost reckless in his desire to free his son from the dragon.  His plan to pose as Paul seems logical, but Daniel's knowledge of his golem's habits, and of life in the north, are non-existent and likely to cause problems.  Daniel falls into the charade even deeper when he finds out Paul has a daughter—magically-skilled, four-year-old Ethelinda.  Now he has to worry about his own son, and Paul's daughter.

This shows that Daniel—despite the hard appearances he keeps—cares very much for the younger generation.  He has so many horrible memories of what being orphaned was like, and he struggles to make lives better for the children around him.  Especially since he was the one who killed Paul, he feels a debt to Ethelinda, and let's her know that she can find him if she ever needs revenge.

Gabriel Argent, water mage, plays a big role in this book.  Gabriel is one of my favorite characters within the series, because he's able to have power, and remain a good man.  However, this time he's put to the test.  He, Max, and Cassandra, aid Daniel by sneaking into Northern California and helping him find the Firedrake.  Gabriel has other plans, though.  For the good of his city, the Firedrake needs to be tamed—and he has the means to put it under his control.  But having that much power changes a man, and Max is not about to see his master and best friend corrupted.

This really turned into an interesting examination of human nature: will power ultimately turn a man to evil?  Gabriel has been the good guy from the beginning of the series, while Daniel has been traipsing through gray area the whole time.  Yet, this gives us a complete 180.  Gabriel's mad grab for more power turns his allegiance, even to his closest friends.  It was so shocking, but incredibly engaging, to see.

The pace was a bit slow at times.  Because we switched between Daniel posing as Paul, Gabriel sneaking into San Francisco, and Sam within the dragon, there were times when we had to catch up with the other storylines, even though more exciting things were happening elsewhere.  It was fascinating to see Sam's point of view from inside the Firedrake, but we had very few chapters about him.

This story was bitter-sweet.  A great conclusion to the series, but leaving a bit of sadness at some of the unresolved plotlines.  And not unresolved to the reader, unresolved to Daniel.  He's such a broken man—needing a goal to work towards to give his life meaning.  And after this heist is done, he has nothing else to give him purpose.  The overwhelming sadness is absolutely beautiful.

The fact that these characters pull so much at my emotions is amazing.  I really hope that Mr. van Eekhout revisits Los Angeles sometime soon, and gives us another glimpse into the life of Daniel Blackland.