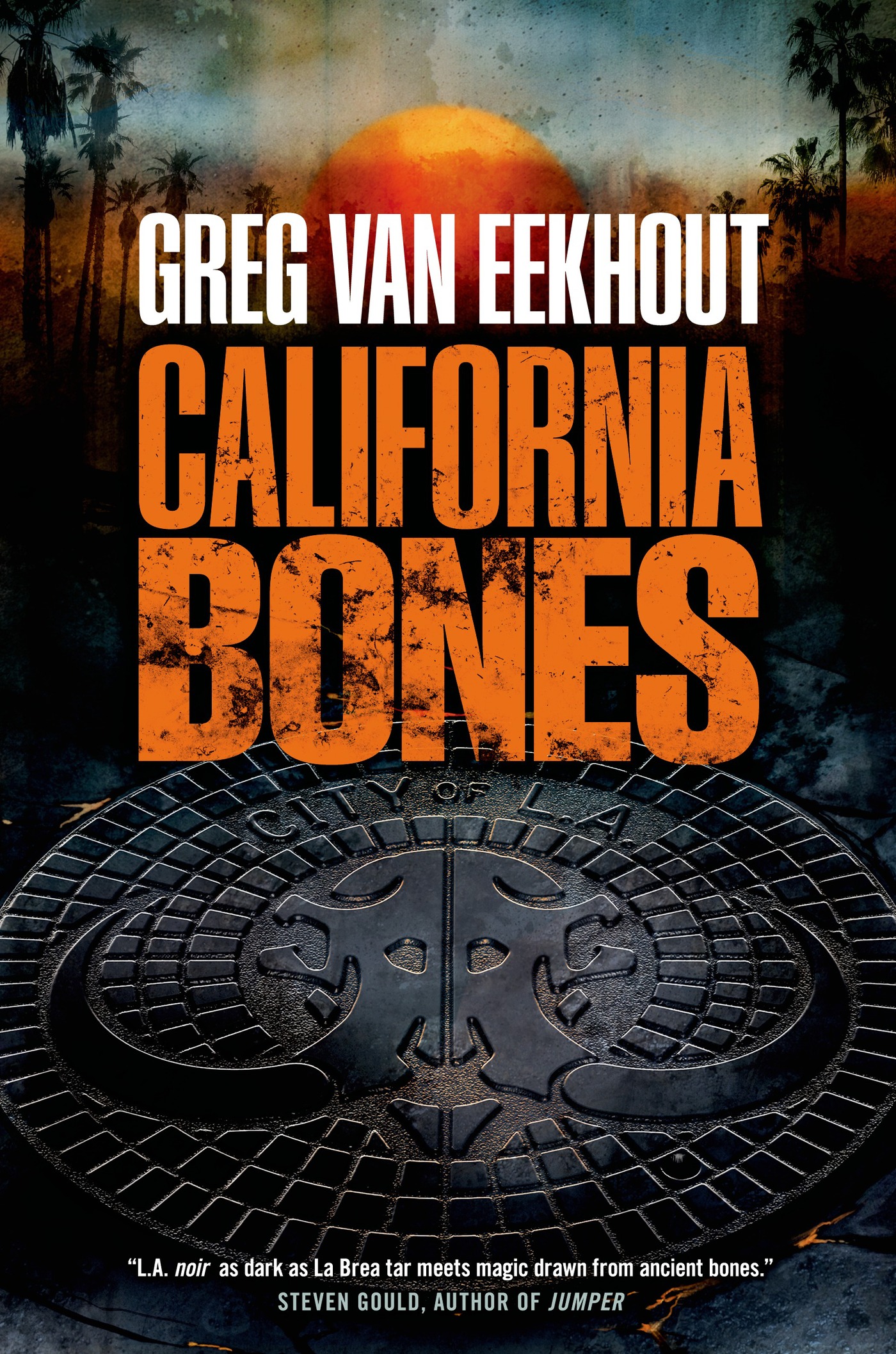 I was privileged enough to meet Greg van Eekhout at the Phoenix Comicon at the end of May.  I listened to him speak on several panels, and was really intrigued by the description of his Daniel Blackland series, as well as his views on writing.  After reading the first two novels in the series (California Bones and Pacific Fire), I am anxiously awaiting the third and final, Dragon Coast, due out September 15th, 2015.

There may be spoilers from California Bones and Pacific Fire below.  Read at your own risk.

Q: In California Bones, Daniel mentions that a sea slug is able to steal genes from algae.  Is that where you got the idea of osteomancy as a magic system?

A: The sea slug that steals genes by ingesting algae was one of those neat things I came across in my research, but the idea of osteomancy, of gaining magic by eating the remains of magical creatures, came from the really general, basic idea that we gain stuff by eating stuff, be it protein, fat, or fire-breathing magic.

A: I wanted LA to be recognizable, but also recognizably different. The big, major, conspicuous change I made was getting rid of cars and streets and freeways and replacing them with boats and canals and elevated flumeways. Some stuff came from LA history, things that used to be there but are gone now, like the Pacific Ocean Park amusement pier. And then there was stuff I kept as-is, mostly little things, like Tito’s Tacos and Roscoe’s Chicken and Waffles. And there was also stuff I kept but altered, like the different-yet-familiar version of Disneyland that’s the characters allude to. As for what I kept and why I kept it, like Disney, I was governed by the question, “Hey, would this be fun? Can I make it make sense? Then it’s in!”

Q: At the end of California Bones, Sam is ready and willing to sacrifice his own life so Daniel can defeat the Heirarch.  Yet, Daniel refuses to eat the boy.  But once the Heirarch is dead, Daniel does eat him.  So, if Sam had killed himself for the greater good, why wouldn't Daniel view that the same way as he viewed eating the Heirarch?  From Daniel's perspective, is there a difference in the ethics of it?

A: I think for Daniel there’s a huge gulf between eating the Hierarch and eating Sam. The Hiearch is a willing participant in a messed-up, exploitative system that literally treats people as consumables. Sam is an innocent. He’s a victim. There’s no way Daniel would ever willingly hurt someone like Sam, much less eat him.

A: Absolutely. Daniel wants to remove himself from Los Angeles and the powerful people who run it, but what he needs to do is penetrate the Hierarch’s stronghold, the actual, physical center of that power. And what Sam wants is to be a normal kid, going to high school, having friends, dating, all the mundane stuff he’s never experienced because he lives his life on the run. What he needs to do, though, is confront the things he’s running from. I think Sam better understands and accepts the difference between his wants and his needs than Daniel does. I think Sam is more of a realist, maybe.

Q: There's a lot of diversity in your characters.  In Pacific Fire, Daniel teams back up with Moth, and we find out he has a boyfriend.  Does this diversity add to the realistic nature of the characters?

A: Sure. The world is populated by all sorts of people, so it’s weird and unrealistic when fictional worlds don’t reflect that.

Q: Daniel, while having good and honorable traits, does seem to take advantage of people when he needs to.  How do you keep him from tipping the balance between good and bad, and losing the reader's sympathy?

A: I can only hope I don’t lose the reader’s sympathy! Daniel definitely does have a selfish streak. He does what he feels he has to do, and he’s willing to use people, even those he loves, to achieve his goals. In that way, he’s caught up in the same system of exploitation as the bad guys. But what I think redeems Daniel is his awareness of his flaws and his desire to protect and improve the lot of those he loves. But he’s certainly far from a perfect person.

Q: Osteomancy is only one form of the way magic manifests in your series.  How is Gabriel's water mandala different from osteomancy?

A: Gabriel’s hydromancy is more akin to engineering. If you learn how water behaves and learn the ways of manipulating those behaviors with plumbing and patterns of water flow, you can do mighty things. The most powerful kinds of osteomancy, what Daniel’s father calls “deep osteomancy,” requires one to change their own physiology over time. You have to change your body so you can ingest magic and use it to its full extent. It’s a more intimate and personal kind of magic.

A: The three of them don’t really team up in Dragon Coast, but if enough people buy the books, who knows?

Q: I think it's pretty safe to say that Sam would have grown up different if Daniel had left him in Los Angeles.  But, would it have changed his nature, what's at his very core?  Would he have seen the reconstructed mammoth as food not kin?

A: It’s hard to say, because in addition to his magical heritage, he’d also be influenced by his environment and the people around him. If he’d been raised by evil turds, he may well have turned out an evil turd.

Q: Is Sam at all affected by the love potion in Daniel?

A: Daniel has managed to rid himself of the loyalty spell between California Bones and Pacific Fire.  It's one of the untold parts of hte story that I hope will come out someday, maybe as a short story.

Q: Did Daniel eat any part of his own body when he switched with Paul?

Mr. van Eekhout is the author of several other fantasy and YA novels and short stories.  You can find out more at Mr. van Eekhout's website.  You can also purchase all three in the Daniel Blackland series in the Dragonmount eBook store.