It’s time for another author interview!  I’m very pleased to be able to have J.S. Fields with us.  J.S. is the author of the Ardulum Series, with the third book, Third Don, being released June 4, 2018.  J.S. is an author, an artist, and a scientist, with a special interest in wood spalting. 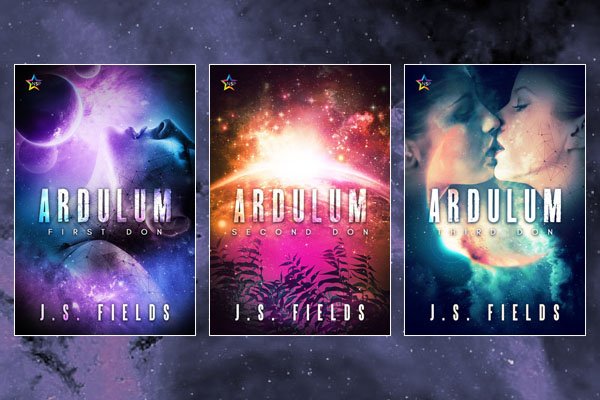 It’s time for another author interview!  I’m very pleased to be able to have J.S. Fields with us.  J.S. is the author of the Ardulum Series, with the third book, Third Don, being released June 4, 2018.  J.S. is an author, an artist, and a scientist, with a special interest in wood spalting.

Q: Thank you for taking the time to talk with me, J.S.  Can you tell us a bit about yourself?

Thank you for having me! I’m a professor, parent, professional sculptor, and most recently, author. I live in the Pacific Northwest of the USA but am not a dog person, which is sort of a perpetual issue in this region. I love dark chocolate, dark fantasy, and anything with a strong f/f or enby/f romance line (assuming it still has plot). Also I’m queer x10000, but I think that goes without saying.

Q: Your Ardulum Series is praised as a ground-breaking space opera with special emphasis on species with more than two genders, or gender-neutral roles.  How important is it to you to see this representation within the writing community?

Being nonbinary myself, I am of course very tired of not seeing myself in fiction. But I think more importantly, in space science fiction, there is really no excuse to not have nonbinary genders. The binary doesn’t even routinely exist on earth, so why in the world would it exist for every species we might meet in space? While representation clearly matters, I think I’m actually more insulted on a science front when I read science fiction that doesn’t include nonbinary genders. How can anyone claim to be a scientist and not understand (or embrace) the natural variability of living systems?

On the representation front, I think in many ways science fiction has not really evolved in terms of gender. Sexuality has always been explored (not always well, or respectfully), but gender seems to be this big hurdle writers can’t get around (exceptions, of course, do exist). We can imagine hyperdrives and wormholes, but not the idea that this person with breasts and a vulva isn’t a woman. And the more space science fiction, especially, pushes the boundaries of sexuality, the more the lack of gender representation stands out. It’s demoralizing and, quite frankly, incredibly ignorant, to imagine worlds where, say, everyone is ‘anatomically female,’ so of course there are lesbians, but no one ever seems to stop and go, oh, hey, just because they have these parts doesn’t mean you still wouldn’t have men, or enbies. It feels like conscious erasure, like nonbinary and trans people are just too much work to put into a narrative. Because calling someone with a penis a woman is so much harder than a two-page treatise on how a civilization evolved on a tidally locked planet inside a wormhole.

Q: Your series introduces several new species.  Can you explain a bit about them, and how they are different/similar to humanity or other alien species we’ve grown accustomed to?

ARDULUM has a number of non-human species. In fact, humans, while present, are not POV characters, nor do they drive the narrative.

I did make a conscious effort to make most of my aliens humanoid. This was for a number of reasons, including but not limited to:

1)      reader familiarity: while some readers love a good goopy, phase-shifting being, if you don’t have humans as your main characters, you will lose readers who cannot connect with goopy-protag.

2)      technology: we all work within the ecosystems that support us. It makes sense that bipeds would generally congregate together due to similarities in needs. Hence, while it is made apparent in the series that plenty of variation exists across the galaxy, the bipeds mostly hang out in biped-specific establishments. This means they generally only meet other bipeds. Some exclusions occur, and in fact, it is the interaction of biped/non-biped interactions that drive a lot of the narrative

3)      genetics and reproductive fitness: there are a lot of genetic narratives in play in the ARDULUM  series, and for those to work, I need genetically related species. Genetic relations generally tend to mean you look like the person you’re related to (on a family level or higher), so I didn’t have a lot of leeway to have non-humanoid bipeds in the narrative.

4)      Sex. I like a good tentacle sex scene as much as the next person but I’m not prepared to write one.

To the aliens in ARDULUM specifically:

At the heart of the story is Neek (from a planet of the same name), a young woman outcast from her world for failure to tow the religious line. This species has two distinct phenotypes: the eight-fingered variety that mostly have reddish hair and variable skin melanin content, and the variety that have bone white skin and variable fingers. All secrete empathic mucous from their fingertips. There are three standard genders on Neek: male, female, and gatoi. Gatoi is third gender, and while genitals are never discussed, it is established that this gender is a player in reproduction.

The Ardulans are bipedal humanoids with transparent skin (of varying melanin contents), also all with reddish hair, and also with a male/female/gatoi breakdown (you see now where the genetic through-line is coming in). To describe much more would give spoilers, unfortunately, but generally this species has some unique telekinetic abilities.

Mmnnuggls are the primary non-bipeds of the series. These are ball-shaped beings that hover a few meters off the ground (the mechanics of this are not discussed). They’re generally shades of purple (sometimes so dark as to be almost black). They have four genders (primary male, secondary male, primary female, secondary female), which includes both anatomical changes and social role changes. This species was a lot of fun to write because they choose to interact with bipeds, but there is so much to understand between fundamentally different lifeforms. What are the purpose of hands, afterall, if your species has evolved to have no use for them? They probably just look downright stupid! But really, having characters like the Mmnnuggls points out the real struggle in writing aliens, and why so many books/movies chose to use a standard biped form. If you’re going to have multiple aliens, there’s just too much anatomy and culture to build to even have your species begin to interact. And the more disparate the anatomy, the more likely it is that the species require mutually-exclusive environments. And then you’re into a whole different type of science fiction.

The final species of note are the Risalians, an agender, bipedal, humanoid species with a blend of mammalian and reptilian roots. These are the prerequisite blue-skinned aliens of the series (tropes help ground readers, I’ve found, when you have a lot of new information and ideas to toss at them). While the neopronouns for the Risalians threw some readers, I thought it was really important to not just give nonbinary genders a pass with ‘they,’ especially since there are so many different flavors of nonbinary in the book. Hence, every type of nonbinary gender gets its own pronoun set. The reviews on that are about what you would expect, but as a nonbinary person, it was really important to me to highlight the uniqueness of each gender. ‘They’ just wasn’t going to cut it.

Q: How important is it to add romance within the series?  Do you feel it’s a personal preference or more an obligation to the reader?

I think that depends on what type of audience you are trying to capture. A lot of hard science fiction readers aren’t looking for romance. Romance readers, clearly, are. Yet, it’s very hard to market a book as f/f and not have some romance (although it really shouldn’t be. Lesbians are allowed to have autonomous lives without chasing tail constantly). For me personally, I like to see a romance line in a heavier plot, because I just haven’t had the opportunity to see the kinds of relationships I engage in mirrored in fiction. Hence, my books always have a romance line which is integral to the story, although as in the case of ARDULUM, the purpose behind it is so deeply wound in with the plot that you don’t see its purpose until the very end.

Q: Do you have any authors that have influenced your writing?

Not particularly. I think a lot of TV shows influenced me though, especially the slew of 9pm sci fi serials that used to play on FOX back in the 80s and 90s. M.AN.T.I.S., VR5, Time Trax, these were the shows that shaped my understanding of science fiction/fantasy and inspired me to write.

Q: Your scientific background is amazing!  How does your academic work influence your fiction writing?

Specifically for the ARDULUM series, the science part of the book is entirely informed by my background in wood science. I get to interact with some really neat tech as part of my job, and it was a great opportunity to get to showcase some of that work in fiction. In THIRD DON, I got to play with the other end of my research, fungi, and I think any mycophiles reading it will be pleasantly surprised with the nods to the science of wood decay.

Q: Do you have any other fiction projects in the works?

I am currently querying a YA fantasy with a nonbinary protagonist, where the magical system is based on spalting fungi (there’s that academic tie-in again). There will also be a fourth ARDULUM book—a book of shorts that contains origin stories for the main characters.

Q: Is there anything else you’d like readers to know about you, or your series?

One of the best ways to support authors, especially indy and small press authors, is to leave reviews, especially on Amazon! If you read any of the ARDULUM books I would love it if you would take a few minutes and leave an Amazon review. It can be something as simple as ‘Boobs!’ or a several page narrative. One start or five, every review matters.

And of course if you want to chat, whether to bemoan the very slow-burn romance of Neek and Emn, or to work through the mechanics of cellulose microkinesis, you are always welcome to engage with me on Twitter.

You can check out J.S.’s website, Twitter, or Goodread’s page for more information. First Don and Second Don are currently available, and Third Don is available for preorder from NineStar Press.