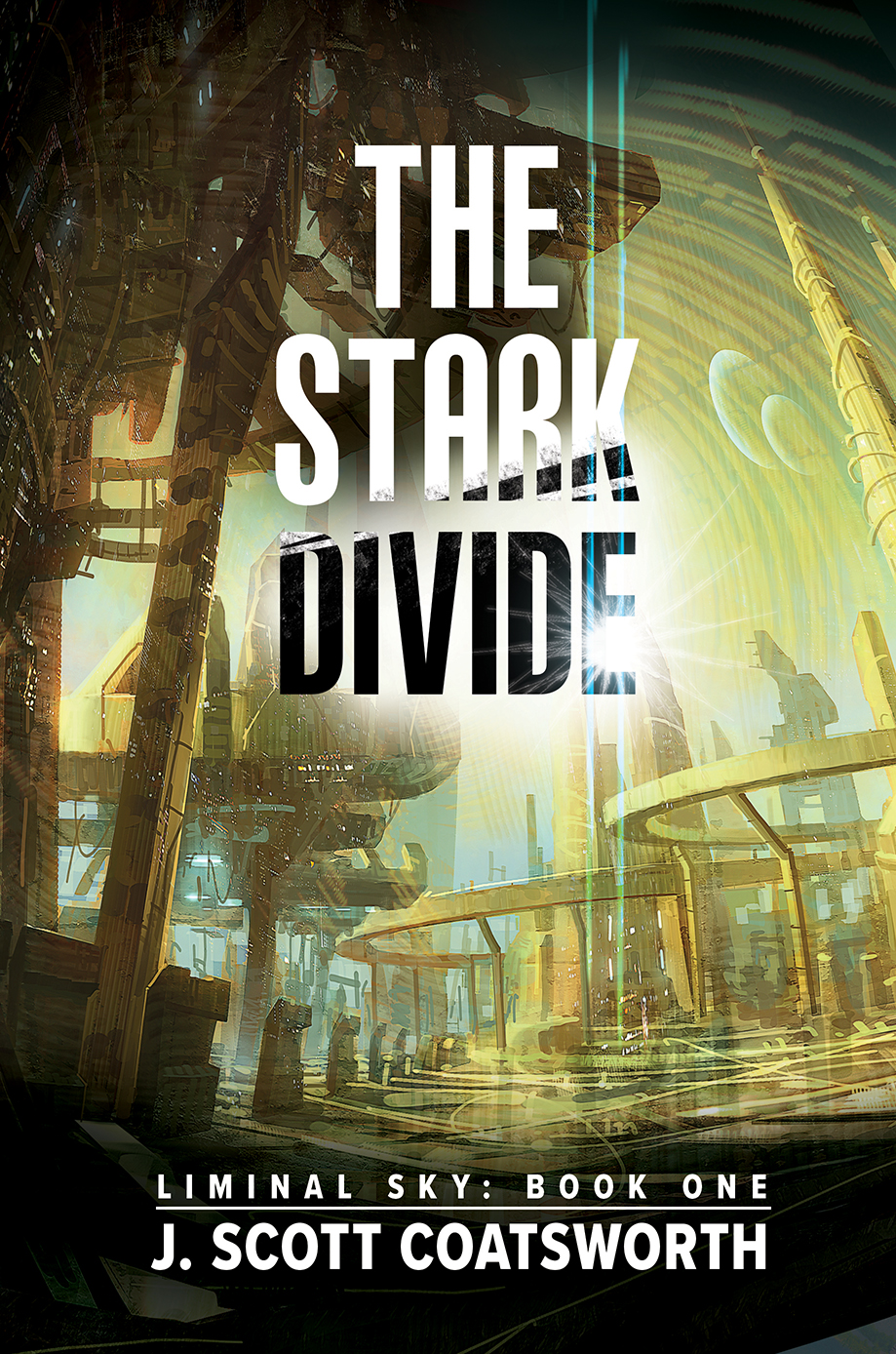 I was excited to get to speak to J. Scott Coatsworth about his newly released sci-fi novel, The Stark Divide. The book was enjoyable, and I was eager to delve further into what its author had to say.  You can read my review of The Stark Divide here.

Q: The cast of the series is quite diverse, in terms of age, gender, nationality, and sexual orientation. I like that it suggests a uniform front in the future, people willing to work together regardless of their background or lifestyle. Was that a theme you wanted to emphasis?

Hmmm, that’s a great question. I’m a fan of golden age sci fi, when things were a little simpler. And while I sometimes like things dark and complicated, sometimes I’m in the mood for Star Trek. I was a Superman fan as a kid - I loved that he was true and strong and good, and for that reason I absolutely HATED Batman vs. Superman. We’r going through such a dark period now that I want to believe, have to believe that at some point, some of us will find a way again to pull together for the common good. So yeah, I guess that does come out in the book.

Q: The story also spans the course of 30 years.  How difficult was it to storyboard or brainstorm the steps for the evolution of Forever?  Can you tell us how far into the future the series will reach?

The Stark Divide is actually the second book in the series. The first one was written more than twenty years ago, and was never published. In the current timeline, it would take place a few hundred years after this part of the story. I sent it off around 1995 to ten big publishers - it took a year, but the last rejection came in, and I pretty much gave up writing for almost twenty years.

When I came back to writing in 2014, I decided to go back in time and figure out how the world came to be. It started with a novella that eventually became Seedling, the first part of the novel. I’m writing another sci fi series - Skythane - that’s told in a more traditional one story format, so doing The Stark Divide in a three-story epic format has actually been a lot of fun. Each story can stand alone, but they share characters, and allow me to telegraph the story over a long period of time. It’s exciting to see how things shift each time, as a decade or two passes.

The current trilogy will cover a hundred years, give or take. But I hope to eventually take it all the way across the stars, to mankind’s new home - maybe 300-400 years in all.

Q: Did you find it difficult with these jumps in the timeline? Or was it easy to let the reader conclude the natural steps between without it being shown in the text?

I think in most cases it should be easy for readers to fill in the gaps. It’s like getting to fast forward and see if the couple you liked really makes it, or if the world comes through the latest challenges and goes on to grow into something new. It’s one of my favorite things about the story.

Q: I love the undertone of religious epiphany throughout the piece. First in Hammond’s realization that AI may have souls, and then in the coincidental episodes that lead to Ana’s metamorphosis. Is this important to the plotline of the story arc, or just a detail of the characters?

It’s something I didn’t really plan at first. Initially I was going to have the Church be a villain in the first part of the story, but then it took a turn. One of my best friends is a very religious Catholic, but she’s also one of the most progressive people I know. I’m more on the atheist side, but when I asked her for some help on the confirmation process for the story, it made me think. It’s so easy for me as a gay man to make a villain out of organized religion.

Not too much later, my husband decided he wanted to go back to church for the first time in more than twenty-five years - a reaction to the growing strife and negativity we are all living through today. I went with him out of solidarity, and we found a progressive church nearby. These two events made me reconsider religion, and realize that it had a place in any future that would spring forward from our present.

So I decided to weave religion into the story, and it’s been a fascinating thing to work with.

On a side note, the series title, “Liminal Sky,” came out of a sermon Pastor Matt gave in which he used the word liminal to talk about the people on the edges of society. It was the first time I’d ever heard it, and so I looked it up:

1. relating to a transitional or initial stage of a process.

2. occupying a position at, or on both sides of, a boundary or threshold.

It seemed perfect for the time when everything changes.

Q: On that same note, Lex seems to be able to anticipate what may happen. Within your world, is Lex a deity?  Or is it more the processing of a supercomputer to analyze logical outcomes?

Hmmm, I’d never thought of it that way. Lex is not a deity, though there’s that famous quote from Arthur C. Clarke:

"Any sufficiently advanced technology is indistinguishable from magic.”

And I do play more with the themes of religion and heaven in book two, “The Rising Tide,” which I just finished.

Q: Andy’s inherited “dipping” seems to be something similar to magic.  With this genetic code being passed onto the next generation, will more and more of humanity be able to bend the world around them?

Um, yes… and… kinda? There will be a lot more of it in book two, along with reaching and pushing. :P But by the end, things will shift again. That’s all I can say.

Q: The ending is bittersweet.  Was it depressing to write, thinking of how easily the world could be decimated?  Or is there more a focus on the hope that life will always find a way?

A little of both? I gotta say, part of me is ready to blow things up and start with a clean slate. We’ve gone so far down some dark roads that I’m not sure there’s a way back. On the other hand, the Obama years showed me what was possible when good people strive for big things, and I still hold out hope that things will change. Or yeah, that life (and mankind) will find a way.

You can purchase The Stark Divide in paperback or ebook here.  To learn more about J. Scott Coatsworth, check out his website!