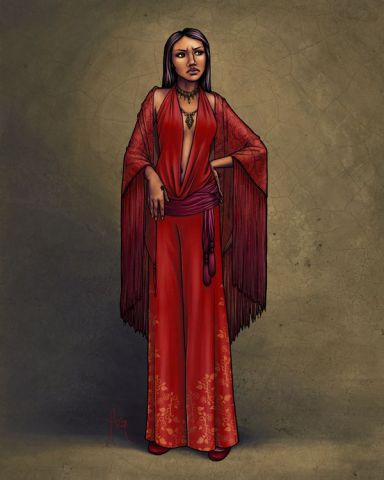 Hello! Welcome once again to Fan Art Friday! I’m Seafolk Sedai, and so you probably won’t be surprised that my very first topic will be…the Atha’an Miere.

I’ve been in love with the Sea Folk since the very first time Bayle Domon mentions them in Eye of the World:

Chapter 24, "Flight Down the Arinelle"

"There be stranger things in the world than this, though. On Tremalking, one of the Sea Folk’s isles, there be a stone hand fifty feet high sticking out of a hill, clutching a crystal sphere as big as this vessel. There be treasure under that hill if there be treasure anywhere, but the island people want no part of digging there, and the Sea Folk care for naught but sailing their ships and searching for the Coramoor, their Chosen One."

Adventure, strange sites, treasure, and an entire ethnic group that lives on ships? Yes, please. I’ve always been fascinated with the ocean, and all things related, so when I saw a mention of Sea Folk in the first book, well, that was the moment that hooked me on the series. I put my book down, stumbled down the rabbit hole of internet fandom, and fifteen years later I come before you as Seafolk Sedai.

Enough about me, though. Let's get to the art!

I enjoy a little tongue-in-cheek art! This is really well done, and informative!

I found this piece of artwork on what my one semester of Spanish and context clues told me was the page for Windfinders, and I find this image to be stunning. Especially since I have never seen this one before. It reminds me of more traditional fantasy art, and there is so much intricate detail. This is also on the English version of the WotWiki, but Spanish is totally sexier, so I’m keeping Detectora de Vientos in mind for future use. Speaking of sexier, this one pushes the envelope a little for PG-13, but do you know how hard it is to find Sea Folk artwork that is PG-13? My troubles, let me tell you about them.

I know the toplessness is meant for the provocation factor, but I find the attire worn by the Atha'an Miere to be fairly efficient, and pretty egalitarian. It only sucks that the shorebound are so conservative and weirdly mysogynistic for a culture with so many women in positions of leadership that the female Sea Folk feel the need to cover themselves--even if it's only nominal.

This is a piece of digital art by DrowElfMorwen for some RolePlay characters. It looks simplistic, but I know that digital art is far more complex than it seems. I like that this artist actually put thought into the colors for each rank, and the accessories each character is wearing, since they're such important aspects of the Sea Folk culture.

This is a lovely image of an Atha’an Miere woman who is Aes Sedai of the Brown Ajah. Seems  SweetYuya and I had similar thoughts on what that would look like! I like the sketch/watercolor feel of this piece; usually sketched style art looks somewhat unfinished to me, but this looks completely finished, entirely purposeful, and it’s lovely!

And now for my very favorite Seafolk image. I’m completely biased. In full disclosure, this is an image I commissioned for a character I roleplay on the Prophecies of the Pattern MUD, which was my first introduction to Wheel of Time fandom. This is another Sea Folk Aes Sedai – Airelle din Diko. Jefita, as the artist goes by online, also has another piece of Atha’an Miere art, but it is of the more traditional sort, and therefore not PG-13: Atha'an Miere by Jefita. It is too amazing not to share.

And because yes, there are men among the Atha’an Miere, here’s a Cargomaster, all decked out and ready for battle.

And that’s it this time! If you have other Sea Folk art that you love, please share it in the comments below. I’ve seen pictures out there of a couple people who have done Sea Folk costumes; if you’re one of those, I want to hear about it!