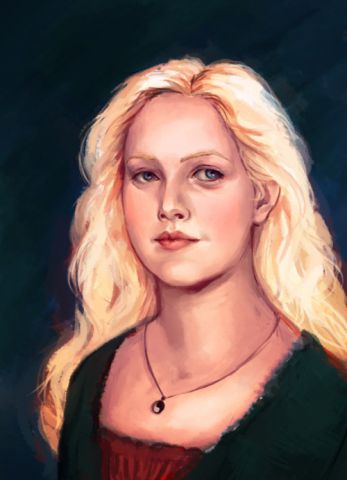 What do we know about her? Well, she was Lews Therin Telamon’s wife, properly named Ilyena Therin Moerelle; mother of his children. Before they were wed, she was known as Ilyena Moerelle Dalisar. (There is some speculation that perhaps this was an error and should have been Ilyena Dalisar Moerelle, since the third name was earned in the Age of Legends and Moerelle was the name that carried over when she took her nuptial name, but it is only speculation.)

We don’t know what she did to earn her third name, but it must have been something of note, as it seems these names were not handed out lightly. Even some of the Forsaken, largely the top in their respective fields, had not necessarily done anything to earn a third name yet.

We know that she had golden hair. With a nickname like “Sunhair” it would be preposterous to think that she was anything but a blonde, or a ginger. (The Amy Pond sort of ginger, not the Jean Grey sort at that.) Brunette would be right out. But I’ve never talked to anyone who has actually read the prologue of The Eye of the World who thought she was anything but a blonde.

We know that Demandred desired her (because of course obsessed stalker Demandred wanted everything that Lews Therin wanted) and we know that Lanfear hated her in stereotypical psycho ex-girlfriend fashion. Side note – kind of interesting that Demandred and Lanfear were never a thing. I think I may have found a new ship to sail.

Finally, we know that she, and all of her children, were slain by Lew Therin while he was overtaken by the taint, earning him the name Kinslayer.

She must have had a very interesting life, and I’m not the only one who thinks so.

That’s it this time.

If you have a character or subject you’d like to see featured, drop me a line! I’m looking for folks who do Wheel of Time cosplay or have Wheel of Time related tattoos, or any other “out of the ordinary” art forms, so let me know if you’re interested in sharing.