Words of Radiance Review and Tour 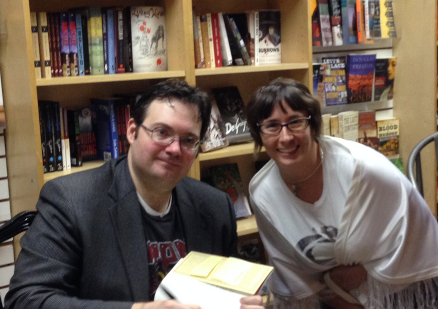 [slight spoilers of The Way of Kings and Words of Radiance will follow.]

Brandon Sanderson's latest epic book, Words of Radiance, was released earlier this month.  At over 1,000 pages long, it took me a week and a half to make it through.  Not from lack of wanting to, only from lack of time.  I finished it on Friday morning, which was my goal, because Friday evening was Brandon's signing in Scottsdale, Arizona (the bookstore livestreamed the event; you can watch it here).

The book looks intimidating.  It's really, really big.  I think that could put many readers off.  But, if you can stick with it, the story is well worth the effort.

It picks up where The Way of Kings left off.  Kaladin and his Bridge Four gang have been taken in by Dalinar.  Dalinar is still experiencing his visions from the Almighty, trying to put them together for a plan to save the world.  Shallan—despite her betrayal of Jasnah—has been embraced as a full ward of the heretic, and helps research the Voidbringers.   The world is heading towards destruction, but all our heroes fight towards the goal of salvation.

Shallan's storyline was the most interesting.  Brandon has said that each book within the Stormlight Archive will be one person's story—The Way of Kings was Kaladin's book, sharing his past through flashbacks.  This was Shallan's book, and we were finally shown her whole story.  It was fascinating to see how she transformed from the timid girl of Jah Keved to the ward and confidant of one of the most powerful women in the world.  She finds her inner strength and grows into a very strong character.

This is helped by her bonding of a Spren.  We saw Kaladin make on bond with Syl, the Windspren, in The Way of Kings, and Shallan's bond with her Spren is similar.  Pattern, a Liespren (or Cryptic), helps Shallan build her powers.  With different typed Spren, though, come different powers.  Shallan's abilities are very unlike Kaladin's.  She is able to Lightweave, forming illusions.

Kaladin, though not the main focus of the book, still has a great story arc.  After being rescued from Sadeas, Kaladin and his bridgemen take the employ of Dalinar as personal bodyguards.  Kaladin soon finds himself protecting the whole Kholin clan, including the King.  Knowing his duty is the right thing to do, he is still torn at the prospect of protecting Lighteyes—people who think themselves raised above him.

Throughout the novel, Kaladin battles with himself over these mixed feelings.  He respects Dalinar, but can't seem to take that final leap in trusting him completely.  He is unable to confide his abilities to Dalinar, even though he knows he should.  Kaladin does a lot of regression in this book—going back to hating the world and the people around him.  It makes an interesting parallel to Shallan's story because they share experiences of overwhelming grief in their past.

Dalinar doubles his efforts to find Radiants.  He is convinced that the mythical figures will begin appearing to help save the people from the Desolation that is coming.  Sadeas still undermines Dalinar's beliefs and the Kingdom is nearly torn in half between the two Highprinces.   Still, Dalinar pushes on, despite the ridicule of the other Highprinces.  He is so firm in his beliefs that he doesn't let anything deter him from his duty.

He is such a great character.  He's strong of will and mind, and he is able to put aside his shame and focus on the bigger picture.  His goals are very ambitions, but he does everything in his power to make them come to fruition.

The book is divided into five parts, with interludes in between.  These interludes feature characters that are minor, or out of the way, but still offer insight to the state of the world.  The most interesting of the interludes was from the point of view of a Parshendi Shardbearer, Eshonai.  She wants to make peace with Dalinar and the Alethi people, and takes steps to meet with them.  However, something happens to the Parshendi, a transformation that changes Eshonai's intentions drastically.

We also see other people who have made bonds with Spren.  This is just a taste of all the abilities—all the Orders with the Radiants—that we will see as the series continues.

Exciting and captivating, this book is wonderfully paced—the interludes giving needed breaks from the thick intrigue of the main storyline.  It is humorous and sad, light and dark, hopeful and depressing.  Brandon has done a great job of making a world and characters that are realistic.

The rest of Brandon's tour dates are listed on his website.  The event was very well attended—not everyone could fit inside the bookstore!  He also had prizes to hand out, with Shardhunt codes—which will unlock goodies on Brandon's website if enough of them are activated.  My sister and I were given codes because we dressed up—we both wore our Aes Sedai shawls.  If he's stopping in a town that's near you, I really suggest trying to see him.