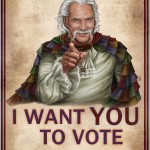 Want to vote for the greatest Wheel of Time character, and do a good deed at the same time?  To celebrate the release of The Wheel of Time Companion, Waygate Foundation is hosting a donation drive, encouraging donors to vote for their favorite character--Rand, Mat, Perrin, Egwene, or Nynaeve--each representing their own specific charity.  Here are the details.

First, we’d like to recognize everyone who’s partnered with us to bring you this drive!

Speaking of perks, we’ve got a bunch!Be sure to check back here or Facebook often to see how your favorite character is stacking up. The drive ends on November 30, so you’ve got plenty of time to make sure your favorite takes the crown…err…coin!

Visit Waygate's website for more details and to donate!