Today's featured author of the JordanCon Anthology Become Legend is Vincent E.M. Thorn, with his submission entitled "The Witch Hunter." 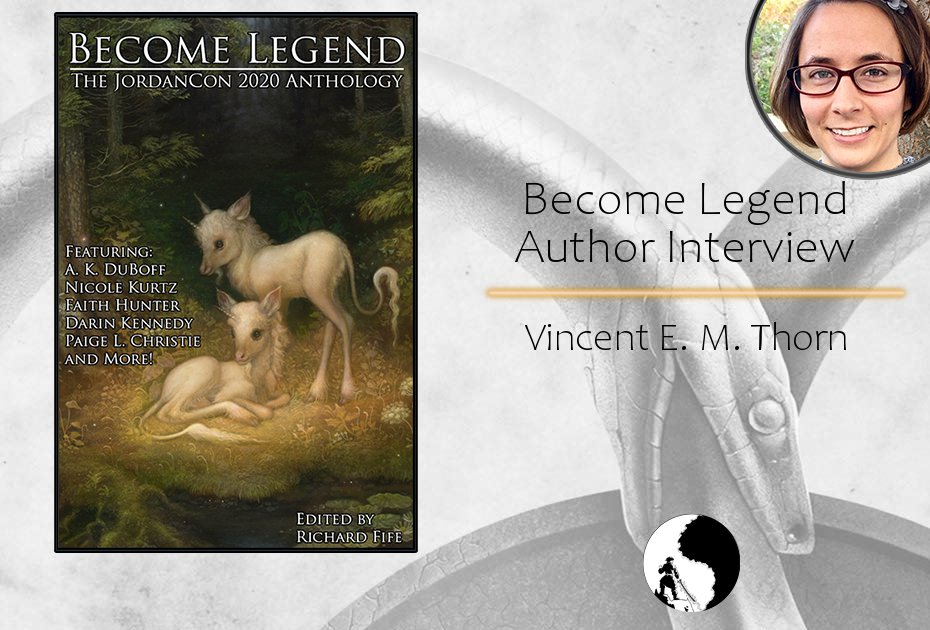 Today's featured author of the JordanCon Anthology Become Legend is Vincent E.M. Thorn, with his submission entitled "The Witch Hunter."

I decided I wanted to be an author at a pretty young age, so I’m pretty excited to finally be in a position to share the fruits of that dream. My contribution to the anthology, “The Witch Hunter,” is my second published work, the first being my debut novel titled Skies of the Empire, which launched last year.

Set in a land much like the wild west, “The Witch Hunter” is a coming of age story following a young girl named Harper, whose life is changed when the titular Witch Hunter rides into town. It was a fun challenge to write this one, which went through a couple iterations before it really came together.

“The Witch Hunter” is pretty firmly in the Fantasy side of things, leaning hard towards High Fantasy. The titular character is going after a legitimate, magic using witch, and there’s no room ambiguity on that front. Multiple mythical creatures are treated as par-the-course, as well.

There were a couple things that had me excited for this.

From the actual writing side of it, it was the challenge. Short stories don’t come naturally to me, as I have something of a complexity addiction. I suppose that comes from the fact almost everything I read falls into the ‘epic’ category. In my original attempt to tackle this story, the scope was too large and the point of view was wrong for a short story, so retooling that was an interesting task.

Outside the work, I was thrilled by the prospect of sharing page space with other writers I’ve met and gotten to know over the years. That’s just awesome.

There are a few themes in “The Witch Hunter,” some deliberate, some I probably wove in subconsciously. On the intentional side, two I’m particularly fond of are taking charge of your own fate, and the end of one era is the beginning of another.

There were a couple direct and indirect inspirations behind the scenes. Most prominently, I was inspired by the Witcher Saga by Andrzej Sapkowski, which also centers around a roving mercenary who fights evil through meticulous preparation and forethought. There is also a similar theme regarding the end of an era. The similar names, however, is entirely coincidental; Witchers don’t even hunt witches.

More for setting itself, I like Weird West stories, and I’m particularly fond of R.S Belcher’s Golgotha series, and think that more fantasy needs to take advantage of just the rich potential of the old west. I mean, come on, the gunslingers and sharpshooters are the American equivalent of knights and samurai.

Also, while I was writing, I made a historical discovery that I felt I absolutely needed to incorporate into the story: a weapon developed in 1856 called the LeMat Revolver, which was both a revolver and a shotgun. As soon as I learned that was real, there was no way I was leaving it out.

I hope you all enjoy “The Witch Hunter” and the other stories in the Become Legend anthology. This has already been such a fun experience, and I’m stoked to see this book in your hands.

Thank you, Vincent, for talking with me today.  You can find out more about Vincent's other works at his website, or follow him on Facebook.  The JordanCon 2020 anthology Become Legend is available for pre-order until March 25th.  You can purchase it on JordanCon’s website.