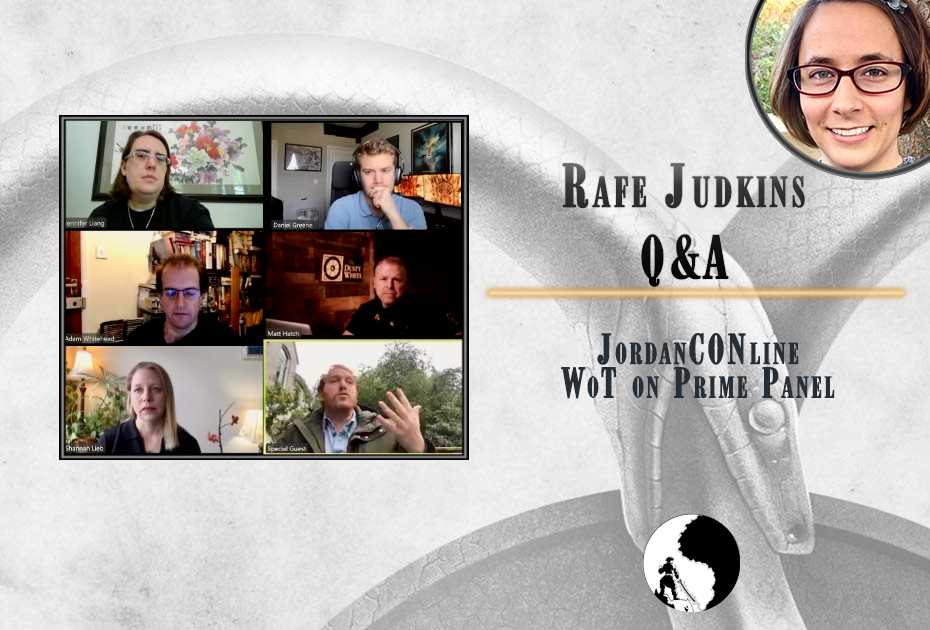 This weekend, JordanCon hosted an online version of the beloved convention dedicated to Robert Jordan, The Wheel of Time series, and all things fantasy.  The Wot on Prime panel had some amazing panelist: Jennifer Liang, Shannan Lieb, Matt Hatch, Adam Whitehead, and Daniel Green.  But the surprise guest blew us all away: Rafe Judkins, the show runner for the Amazon Prime Wheel of Time show.

Rafe’s presence was a complete shock to watchers on YouTube.  Once everyone calmed down, the group talked about casting choices (discussing the amazing acting by Peter Dinklage in Game of Thrones and how it won over the fans), the progress of the series (Rafe did nod when Matt said the series will not premier in 2020, and nodded again when Jenn said there won’t be 14 seasons), and how new fans who haven’t read the series might react to the show (Daniel promotes peace between book fans and show fans).

Rafe spoke about how fans will react to his adaptation.  A lot of factors play into it—alluding to what they could get a dog to do on a Saturday—but Rafe insists he’s keeping the heart and spine of the series whole. He’s casting actors on the ability to portray the soul of the character, or keeping the heart of the scene, even if it’s different from the actual scene from the books.

Rafe went into detail about how hiatus has affected the show, including having all eight scripts for season two finished before they start filming it and how that will positively impact editing and the flow of shooting.  He shared a story of Josha Stradowski (Rand), Marcus Rutherford (Perrin), and Barney Harris (Mat) sneaking out together in a very similar way the three ta’veren heroes are often out finding trouble.  Jenn asked why Rafe wanted to be involved in The Wheel of Time show and Rafe’s answer was perfect—and reminiscent of Brandon Sanderson’s answer for finishing the series—he doesn’t want anyone else to do it because they might mess it up.  Rafe continued on this topic and praised Brandon for his support on the project.  Adam asked about how gender will play into the show and Rafe answered that the Wheel of Time series addressed many gender issues when it was first released and wants to focus on making sure those points are made in a modern way (my interpretation is the show will not be focusing on feminism from the 1990s, but address it from a 2020-ish perspective).  He also talked about major themes of fate, hope and destiny will be prominent within the show.  Matt asked how the show will honor Robert Jordan, and Rafe answered there’ll be more of a feel of Harriet McDougal (Robert Jordan’s widow), Maria Simons (Robert Jordan’s assistant and member of Team Jordan), and Brandon Sanderson.  He also uses audio clips of Jordan’s book signings for help with pronunciations.  Rafe feels behind the scenes footage is better left until after the actual footage has been seen.  He says pictures will be released before any behind the scenes footage. Before leaving, Rafe did praise Wheel of Time fans for our kindness.  Jenn had to reiterate how we try to have a “No Jerks” policy in all our spaces.

After Rafe left, panelists speculated about tidbits Rafe said.  The first being the reference to a dog not doing what it was supposed to on a Saturday—Jenn suggests it might be the scene where Mat flours Haral and Alsbet Luhhan’s dogs?  There was also heavy emphasis on how Rafe is a huge fan of the series and how similar his answer was to Brandon Sanderson on why he got involved with the show.

You can watch the recorded video on JordanCon’s YouTube page, including real-time fan chat!  You can check out other JordanCONline videos here!

So what do you think?  Will Rafe’s fan status ease your worries?  Let us know in the comments below!