So You Want Stories?: Tim Lewis talks about his story "Switch" 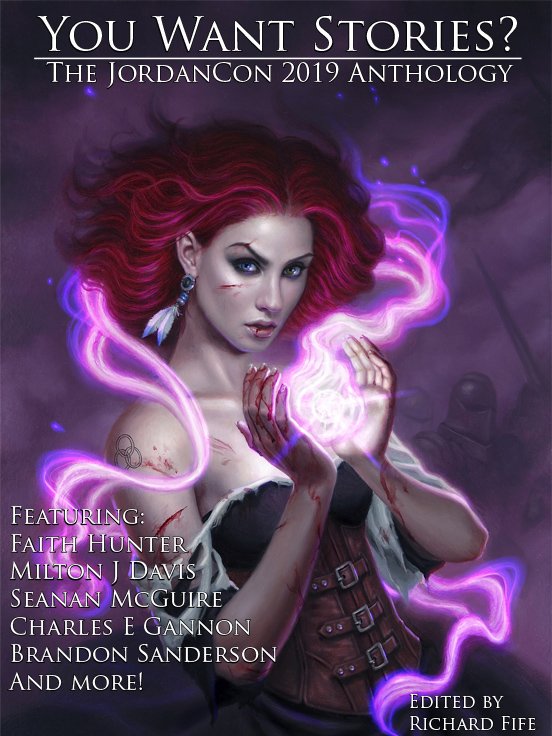 JordanCon is quickly approaching, and our eagerness is beginning to show!   This week's interview is with Tim Lewis.  He tells us about "Switch," his addition to the JordanCon Anthology.

This will be my first published work! I’ve been writing for decades, but only for myself as one of many hobbies. Richard Fife’s idea to create short stories for the anthology inspired me to finally stop procrastinating. The publishing process is very daunting and this was a tremendous opportunity to break into the writing world. As to my writing, is “chaotic sugar induced child at a puppy farm” a style? I have piles of notes about writing best practices from the Writer’s Track at JordanCon, and I tried to incorporate each to some level as I work to find my niche. In the beginning it was random pieces as ideas came to mind, then slowly stitching them together, reluctantly killing a few “little darlings,” and then finally obsessing about each word and phrase until I had to walk away.

After Googling “speculative fiction scale,” this is a soft science fiction story based on a near future to add some plot devices to move the story along, but it could be placed in any era. I started down a fantasy route but as the pieces begin to evolve then sci-fi seemed to be the best world for the story.

My wife reads in bed and I can gauge how good a book is when she has an emotional outburst (and wakes me up). Whether it is a laugh, a cry, a gasp, or swearing like an East Indian sailor, I can see how much joy she gets from reading. When writing “Switch,” I tried to create each of those elements, and if I’m lucky, I may have succeeded with one.

I tried to paint a normal person that people could relate to that, of course, is put into extraordinary circumstances. I have always been a fan of the reluctant hero that rises to challenge rather than racing to it head on. I also added a few references to our current political and social climate that some may find entertaining, or even frustrating. Mostly I just wanted to be able to tell a story of a person that people could identify with as themselves, or someone they know, to create that emotional connection.

I drew inspiration initially from Do Androids Dream of Electric Sheep to create a future with minor changes in technology, but grounded in something relatable to the reader. That is why the story takes place in my home city of Huntsville, AL, so I had some specific ground to build on. I walked down the streets and by the buildings of the exact places that are talked about in the story to inspire the writing; at one point running like an idiot around the courthouse to see if my character could actually do what I described. For the science, a YouTube video about acoustic physics and the floating drop of water became the impetus for the technology. The story also evolved into a pseudo detective noir theme, not by intention, but just organically possibly from my obsession with watching movies. The biggest inspiration and the drive of the secondary narrative was a personal view of society and unconscious bias that I wanted to portray, but I will leave it there so as not to reveal spoilers. And a huge nod to the professional editors Robyn Huss and Chris Kennedy, who were critical in pulling me off the puppy farm to get everything together into a cogent story!

Simply, thank you. I hope this gives you a moment to disconnect from the world and find some enjoyment; and if I was able to get you to wake your partner up while reading my story in bed, then my work was done! If you would like to see more, check out my site at www.LewisVenture.com.